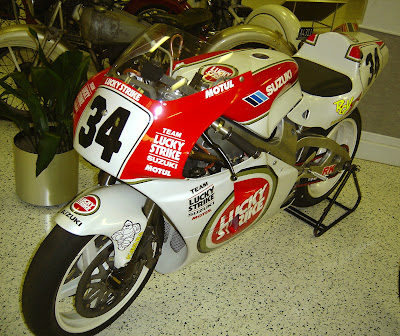 The '93 Suzuki RGV500 of Kevin Schwantz sits on display inside the Indianapolis Motor Speedway Museum in December 2009 among some of the other motorcycles on display a the legendary facility.  Schwantz, who won the '93 World 500cc Championship on this machine, had loaned it to the speedway for several months after the bike had been restored to running condition after having been in storage at his home in Texas.

Schwantz was the guest attendee last week at the annual AMA Hall of Fame Breakfast at Daytona, and one of his long-time sponsors, Motul, was one of the sponsors of the breakfast, fan and friend gathering, and silent auction that took place to help raise funds for the AMA Motorcycle Hall of Fame in Pickerington, OH.  Some items that were donated towards the silent auction came from such luminaries as Don Emde, Bill Werner and the Indianapolis Motor Speedway.

"The AMA was honored when 1993 500cc World Champion and 1988 Daytona 200 winner Kevin Schwantz agreed to talk about his amazing career at this year's Hall of Fame Breakfast at Daytona fund-raising event," said AMA President and CEO Rob Dingman. "Kevin's participation exceeded even the high expectations we had before the event, and served as a stellar example of the amazing careers showcased by the AMA Motorcycle Hall of Fame. The AMA thanks Kevin, interviewer Ben Cheatwood and numerous sponsors and donors for their generous contributions."

Jeff Heininger, chairman of the AMHF, which raises money for the AMA Motorcycle Hall of Fame, added that support for the Breakfast at Daytona is growing.

"The participation of superstars like Kevin and the support of so many donors and companies over the years have made the Breakfast at Daytona a must-attend event during Bike Week," Heininger said. "We're encouraged that this enthusiasm will continue at our other events throughout the year, from AMA Vintage Motorcycle Days this July 20-22 in Lexington, Ohio, to the Hall of Fame induction ceremony in Las Vegas, Nev., on Nov. 16-17."

A video commemorating Schwantz's career and participation in the 2012 AMA Motorcycle Hall of Fame Breakfast at Daytona can be viewed at the AMA's Youtube channel at http://www.youtube.com/americanmotorcyclist.

Featured speaker Schwantz, who was inducted into the Hall of Fame in 1999, rocketed to prominence as one of America's best roadracers during the mid-1980s. By the end of the decade, Schwantz had moved to international competition in the 500cc Grand Prix World Championships. He was a perennial top rider in that series, and won the world championship in 1993. During his Grand Prix racing career, Schwantz racked up 25 500cc GP victories, making him second all-time among American riders.

More information about the AMA Motorcycle Hall of Fame, including how to donate or attend future events, can be found at MotorcycleMuseum.org.