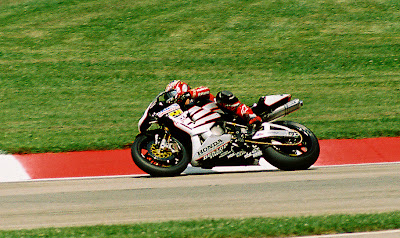 Jake Zemke maneuvers the #98 Erion Honda Racing/Parts Unlimited/PJ-1/MTX-sponsored Honda CBR600RR through turn 14 at the Mid Ohio Sports Car Course during a qualifying session for the AMA Formula Xtreme Championship Series round at the Honda Super Cycle Weekend Presented by Dunlop Tire in July 2004.  Zemke, who would go on to win the 2008 (and final) AMA Formula Xtreme Championship, won the Daytona 200 while riding for the American Honda team in 2006.

Zemke will join former Daytona 200 winners Jason DiSalvo (2011) and John Ashmead (1989 when the 200 was a full-on Superbike event) in the field of 47 riders now pre-entered for the Saturday, March 17 endurance race.  It was just announced last week that Zemke had signed on to ride a Ducshop Racing Ducati 748 in his return to the track that he won the Rolex watch at for last year's event.  Dunlop has been working double overtime to ensure no tire problems plague the field like what were experienced during last year's event that saw the 200 shorted to the Daytona 147.