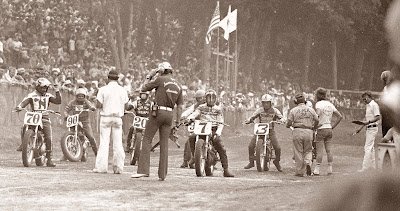 In a heat race that could be labeled the 'battle of the brands' of the day, riders line up for the start at the long-running Peoria TT round of the AMA Grand National Championship Camel Pro Series in August 1975.  Not to mention the legends of the day that were on-hand to circulate the amphitheatre track on their 330+ lb. machines while flying off the infamous Peoria infield jump at over 70 mph.

(L-R)  The late Mark Williams, wearing his Norton factory leathers, lines up on his #70 Triumph mount while looking over the rest of the front row.  Behind him is Ike Reed on the #90 Triumph, along with John Gennai #20 on another British parallel Triumph twin.

Lawwill, who would hang up his leathers just over two years later, was inducted into the AMA Motorcycle Hall of Fame in 1998, will be honored along with 1998 and fellow-inductee Malcolm Smith, at the November 16-17 AMA HOF Induction Ceremony.  Again being held at the Red Rock Casino in Las Vegas, the two will be lauded for their racing accomplishments as much as for their gifts back to the sport that have served them both so well.

Malcolm Smith, Mert Lawwill to be honored as legends

"Just say the names 'Malcolm' and 'Mert' and the motorcycling community knows exactly who you are talking about," said Jeff Heininger, chairman of the American Motorcycle Heritage Foundation, which raises funds for the AMA Motorcycle Hall of Fame. "These two legends starred together in the influential 1972 motorcycling movie 'On Any Sunday,' and we're very excited that they will star together again on our induction ceremony stage."

Smith, who was inducted into the Hall of Fame in 1998, was a pioneer in off-road motorcycling. He's famous for his accomplishments in the Baja 1000 and for his gold-medal winning rides in International Six Day Enduro competitions.

He gained fame beyond the motorcycling community when he appeared in "On Any Sunday." The scenes of Smith and Lawwill play-riding with popular actor Steve McQueen showed people across the country just how fun motorcycling could be. The movie helped launch an explosion in the popularity of off-road motorcycling in America.

Smith went on to become a successful businessman with his Malcolm Smith Motorsports motorcycle dealership in Riverside, Calif. He also built up Malcolm Smith Racing products, now known as MSR, which is owned by Tucker Rocky, where Smith works as a consultant. Known for his support of community projects, Smith also created a tax-free foundation that has raised more than $750,000 to support an orphanage and help educate children at El Oasis in Baja, Mexico, http://www.malcolmsmithmotorsportsfoundation.org.

"I'm humbled to receive this recognition because there are so many great riders and racers in the AMA Motorcycle Hall of Fame," Smith said. "This is a great honor. I'm looking forward to seeing old friends, and meeting new ones, at the induction ceremony in November."

Lawwill, inducted into the Hall of Fame in 1998, was one of the top professionals on the AMA national circuit during the 1960s and 1970s. He was the 1969 AMA Grand National champion and "On Any Sunday" chronicled his bid to defend his title during the 1970 racing season. By the time Lawwill hung up his racing leathers in 1977, he had amassed an incredible 161 career AMA Grand National finishes during his 15-year racing career.

Lawwill went on to become one of the top motorcycle racing frame designers and builders. He then used his expertise to create custom racing mountain bikes that won numerous national and world titles, as well as prosthetic devices to enable amputees to ride motorcycles and bicycles.

"This is totally unexpected," Lawwill said. "I'm very grateful that my peers in the motorcycling community think enough of me to honor me in this way. I'm really looking forward to this event. "

Smith and Lawwill will be honored as Legends at the AMA Motorcycle Hall of Fame Induction Ceremony for the Class of 2012.

Past recipients of the Legends honor are roadracing icon Kenny Roberts and motocross legends Roger DeCoster and Bob Hannah.