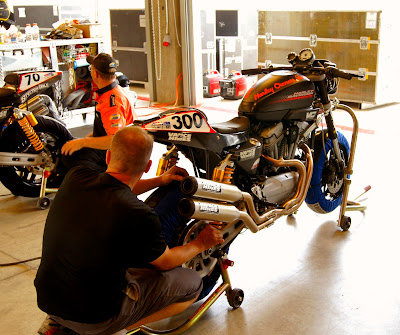 One of the members of Patrick McCord's #300 HOG Racing/Harley Owners Group/Vance & Hines/Ultimatemotorcycling.com-sponsored team goes about getting the H-D XR1200 ready for the final practice session at the Indianapolis Motor Speedway on August 19, 2011.  AMA Pro Road Racing was on-hand at IMS for the two day test prior to the series' debut a The Brickyard over the 4th Annual Red Bull Indianapolis MotoGP weekend.  McCord carded finishes of 13th and 17th out of the 30 riders that took part at IMS for his only appearance in the class for the nine round season.

IMS and AMA Pro Road Racing have just announced that the AMA Pro Vance & Hines XR1200 Series will return as the undercard for the 5th Annual Red Bull Indianapolis MotoGP weekend over August 17-19, 2012.