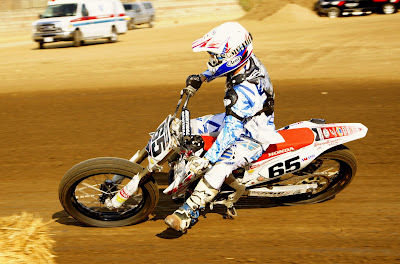 Cory Texter lays down a lap on his #65 RLT Racing/Herr's/Invisible Glass/Penske Racing-sponsored Honda CRF450R during qualifying for round 15 of the 2011 AMA Pro Flat Track Harley-Davidson Insurance Grand National Championship presented by Motorcycle-Superstore.com at the Illinois State Fairground Rodeo-Multipurpose Arena on September 3.  Qualifying 38th out of the 64 riders that took a qualifying time at Springfield, CTex was just over .5 seconds behind fast-qualifier Jake Johnson heading into the heat races for the program's events, and one of only 48 riders that were able to stick around for the night's racing.

Running a limited schedule during the 2011 season proved to be too much for Texter, as he only qualified for the Hartford half-mile event in June, and despite his efforts ended up with an 11th place finish in his heat and an 18th place finish in this semi at Springfield.  Definitely not indicative of what this hard charging and likealbe young athlete is capable of after winning a slew of amateur championships while rising through the ranks.

Opting to amp up his program, he will be competing in the full schedule for the 2012 AMA Pro Flat Track Harley-Davidson Insurance Grand National Championship presented by Motorcycle-Superstore.com season, with strong backing from ER&T and Mad Hog Cycles for both his Twins and Singles Series program and a slew of new and returning sponsors to his Pennsylvania-based effort.  As in the past, CTex will be campaigning Harley-Davidson XR750s for the Grand National Twins Series Championship and Honda CRF450Rs for the Singles Series.

RLT Racing’s Cory Texter made the 14 hour trip to Du Quoin, IL. this past weekend for three days of testing and tuning.  The RLT Racing’s singles, tuned by Englehart R&T, were consistently at the top of the lap time charts all weekend, including number one qualifier for Saturday's race program.

Cory stated, “DuQuoin went very well.  I had some good times all weekend and that was good for me. I wasn’t there to race really, but more so to test all three of my Englehart R&T 450′s.  If I was fast on one bike, I'd hop on the other one and get that one working.  I went down hard on Saturday, and after that my main concern was to get out of there injury-free and get ready for the busy week in Daytona.  I feel great and my team is awesome.  The Engleharts worked hard all weekend and I couldn’t thank them enough for this opportunity.”

Tom Englehart of ER&T had this to say about the testing, “The testing went really well. We accomplished everything we wanted to this weekend.  The bikes ran great, and we dialed in the Durelle Racing suspension to fit Cory’s riding style.  I really think we are going to turn some heads in Georgia and Florida next week.”

Mad Hog Cycles, RLT Racing’s 2012 twins sponsor, also made the trip to Du Quoin.  Dave Miller, Mad Hog Cycles owner, did some racing of his own on a beautifully prepared 360 Bultaco.  Dave has made significant improvements to the Harley Davidson XR750′s Texter will ride this season, and Cory is very excited about getting to Savannah for the All Start races next week.

Cory commented, “Dave has been working so hard on my 750′s.  We have made so many changes that I feel will all benefit me this year and allow me to run up front with the contenders week in and week out.  I have been training hard and I am ready to to rock and roll.”

Shayna will be riding her RLT Racing CRF 450′s at Savannah and Volusia during Daytona Bike Week.  We hope to have a full press release on her program by weeks end, but the plan has stayed the same through-out and that is to win as many races as possible and be in contention for the number one plate at the season finale in Pomona.


RLT Racing would like to thank all of our sponsors for their support in 2012, and we hope to see all our fans in Sunny Florida as we take on Daytona’s Bike Week!

RLT Racing was started in 2010 by Cory & Shayna Texter. It is named after their father and biggest fan, Randy Lee Texter. He passed away in August 2010. Randy was a past AMA Professional Dirttrack and Road Racer and was named the AMA Sportsman of the Year in 2010.

Englehart Research and Technology is located in Zanesville, Ohio. All motorcycles are Honda powered and exclusively use Durelle and J&M Racing Products along with RHC components.