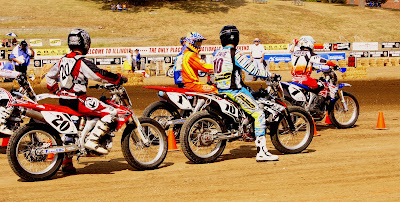 The weekend's festivities get ready to commence at the Springfield Short Track as riders get ready to roll out for the first practice session at round 15 of the 2011 AMA Pro Flat Track Harley-Davidson Insurance Grand National Championship presented by Motorcycle-Superstore.com.  As has been the case for over a decade now, the night of racing at the Illinois State Fairgrounds Rodeo-Multipurpose Arena adds to the exciting action that has been taking place on the mile oval at the Illinois State Fairgrounds since the early '80s over the Labor Day weekend.

(AMA Grand National racing made a regular stop at Springfield until the mid-late '60s before returning in the early '80s.  The short track and TT rounds were added in the early '00s.  At one time, the winner of the event on the mile oval determined the overall AMA Grand National Champion in the days when the race was a 50 mile National event.)

Unfortunately due to the still-slowly recovering economy, the 2012 stops at the little arena will be the last on the schedule for the time being, as was announced by the IMDA early in January (Springfield also hosts a TT over the Memorial Day weekend.)  With people still having to cut back on their entertainment expenditures in the last few years, this great little facility will be going by the wayside for the near future.

Hopefully, some good crowds for this year will help the IMDA and AMA Pro Flat Track be able to justify bringing this venue back to the schedule in the future, as the racing at this place is some of the best on the series' calendar.  Other then the Daytona rounds, Springfield is the only other stop of the season that regularly sees over 60 riders entered in the Singles Series races, all trying to earn a spot amongst the 48 spots that are available to qualify for the 18 rider main event.

These four men are 4 of the top-10 men and women in the nation in the AMA Pro Flat Track Harley-Davidson Insurance Grand National Championship presented by Motorcycle-Superstore.com, and they will assuredly all be in the mix when the green flag drops for round 1 of the 2012 season on Thursday, March 15 and round 2 on Friday, March 16.  For the second year-in-a-row, they will return to the new Daytona Flat Track in Daytona Beach, FL. for the opening doubleheader rounds of the series to provide fans with the best racing on wheels in the world.

Great news today from AMA Pro Racing and SpeedTV as they announced that the races will again be televised by Speed on the same weekend of the opening rounds.  SpeedTV has slotted the highlights of the two nights of racing to be televised on Saturday, March 17 at 10:30 ET.  So mark your calendars and set your DVRs!