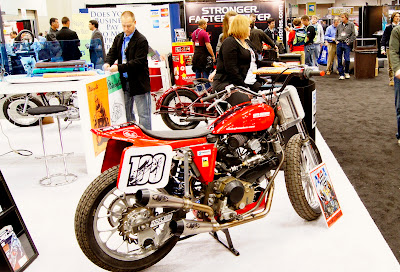 Motorcyclist Magazine had one of the larger display booths at the Indy show, including one of the Lloyd Brothers Motorsports Ducatis featuring the #100 on it.  According to team co-owner Mike Lloyd, the mag is putting together a series of stories about the LBM team as part of their 100th anniversary in 2012 that will deal with their assault on the 2012 AMA Pro Flat Track Harley-Davidson Insurance Grand National Championship presented by Motorcycle-Superstore.com season.

The veteran team has been supporting AMA Pro Flat Track for over two decades now, and finally got their breakout win with Joe Kopp at the helm at the May 2010 Arizona Mile.  '11 AMA Rookie of the Year Brad Baker took the LBM Ducati to a season-best 2nd place finish at the season-ending Pomona Half-Mile on October 15, 2011.

Lloyd also mentioned that the team has removed the 'Ducati' branding from the bike, instead focusing on the team's name and sponsor Nicky Hayden's name on the tank.  Nicky helped lend the LBM team some support during the mid-part of the season last year after blowing a motor at the Sacramento Mile.

"Nicky's been great and he'll always have a ride with us" was what Dave Lloyd had told me last season, and which brother Mike also confirmed at the Indy Dealer Show.  When The Kentucky Kid ran his demo laps at the Lucas Oil Indy Mile in August 2010 it was on one of the LBM bikes.  "He'd been away from flat track for a few years, but he would have qualified in the top 20 that night in just the few laps he did run," according to Mike.

"When he's ready to come back to flat track, we'll put him on one of our bikes in a heartbeat.  We took Ducati's name off of the bike since they haven't been willing to help us out.  They offered us dealer cost on parts, but I can get that at any dealer now," according to Mike Lloyd.

It's been refreshing with all of the other support the team get's from fans at the AMA Pro Flat Track Twins Series races.  "We actually get as many or more Harley fans coming by to check us out at the races, they love the competition and are tired of seeing 18 Harley's out there just racing against themselves," stated Lloyd. 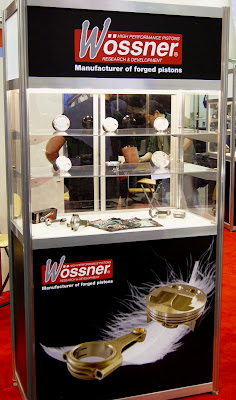 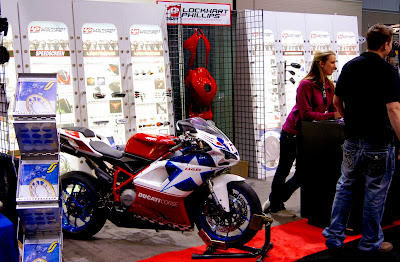 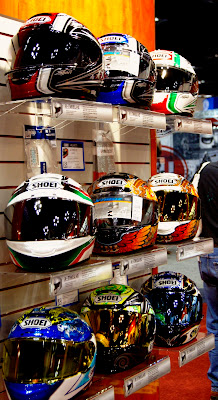 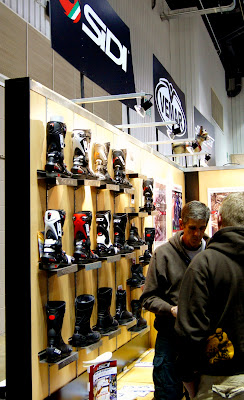 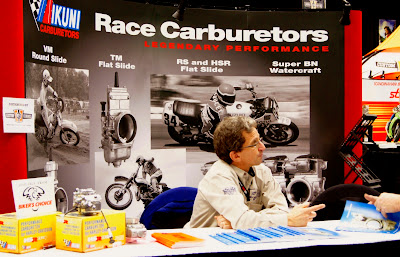 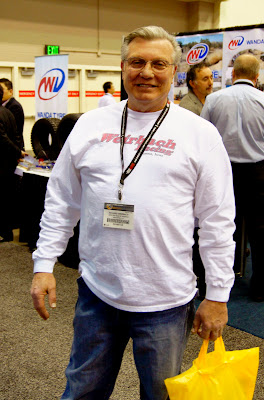 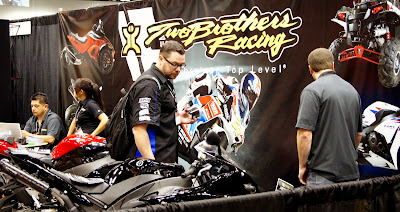 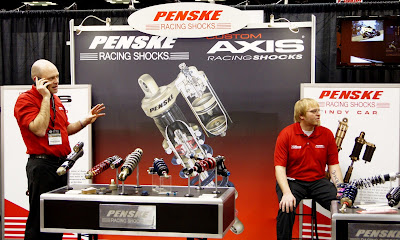 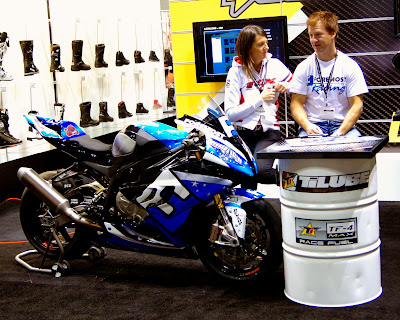 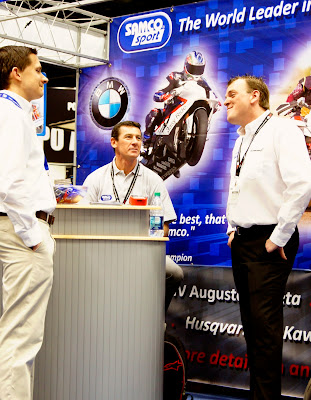 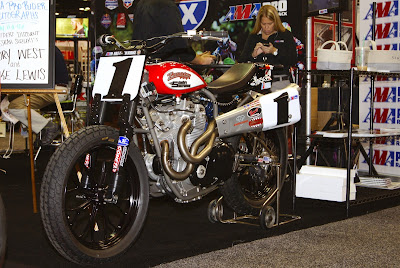 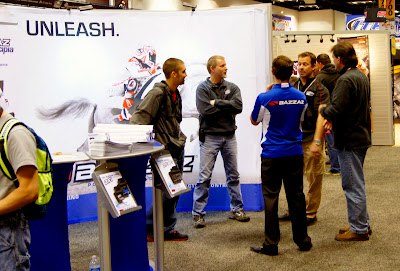 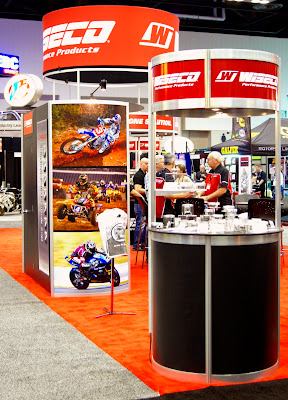 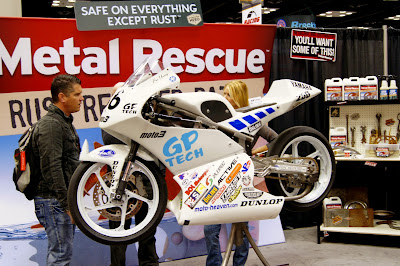 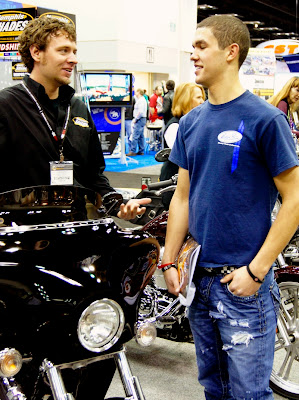 Tyler Porter stayed busy all weekend while helping out the great folks at Memphis Shades (who will be sponsoring Babe Demay's team this season with new rider Rob Pearson #27 in AMA Pro Flat Track.)  Brad Baker stopped by to see the main man from Fight For Dirt Track (www.fightfordirttrack.com) on Saturday of the show. 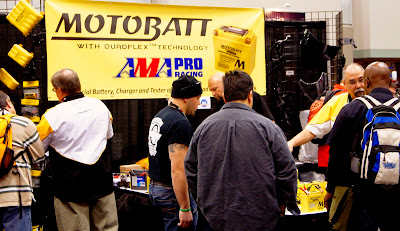 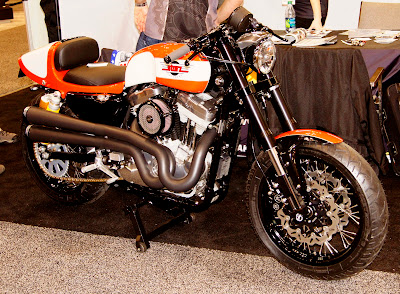 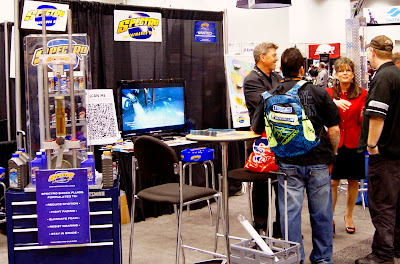 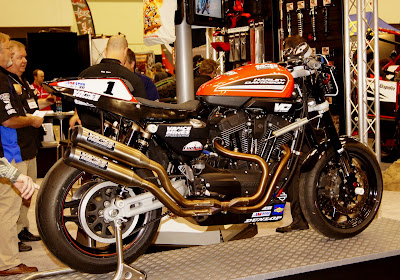 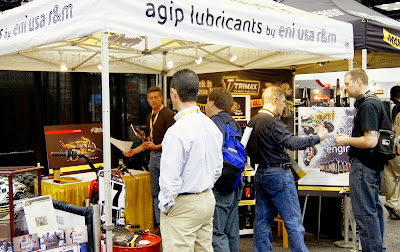 Book-ending our coverage of the 2012 Indy Dealer Expo, we see the Lloyd Brothers Motorsports booth that featured a surprise along with a fine display of one of the team's big sponsors, ENI USA Lubricants.  Team co-owner Mike Lloyd (brown shirt, left rear of shot) is busy talking with attendees of the show and hawking the ENI line of quality products.  "These guys are great to work with and offer a big line of products for the industry," commented Lloyd.  ENI USA rep Dave Rinefierd (2nd from right) was helping out over the weekend and was very enthusiastic about the team's efforts and their association with ENI.  "These guys are great reps for the ENI brand," stated Rinefierd.

As you can see from the 1098 on display at the LBM booth, it is sporting a new number for the 2012 season.  "Yep, Henry Wiles will be our rider for this year.  We tried to get things worked out last year and then they fell apart and that's how we ended up with Brad," according to Mike Lloyd.  "We've got four complete bikes for this season.  This one (the one on-hand in their booth) is the original 1098 we started with, along with Larry Pegram's help several years ago.  We'll have two set up for the mile races and two for the half-miles."

Team co-owner and Mike's brother Dave, wasn't on-hand for the Indy show, but had told me several weeks ago that the budget was almost complete for the 2012 season.  They should be ready to go for the first Twins Series race at Springfield over the Memorial Day weekend, and are planning to run the Savannah, GA. Steve Nace All Star round the weekend before the Daytona Short Track season-openers.

This will definitely be one of the top teams to again keep an eye out for in the 2012 AMA Pro Flat Track Grand National Championship season.  With Henry having ridden for the team in the past (taking their Aprilia to a 2nd place finish at Lima in 2008) they shouldn't have the usual 'teething' problems of getting team, bike and rider to gel.

This wraps up our coverage of the 2012 Dealernews International Powersports Dealer Expo, held in Indianapolis over the February 17-19 weekend.  We hope you've enjoyed our coverage of a handful of the companies, sponsors, teams and riders who help to support racing here in the United States and abroad.  Remember, without these companies and sponsors the sport we so dearly love would not be possible, so whenever you can support these companies and tell them thank you for the time, money and effort that they put into helping to make motorcycle racing possible.

We also want to again thank the great folks at Dealernews who sponsor the Indy Dealer Expo and for putting on such a great show and for allowing Stu's Shots to be a part of it this year.  We had a blast, and we hope all of our readers have enjoyed the coverage.

And you can read part one of our review of the 2012 Dealernews International Powersports Dealer Expo here: