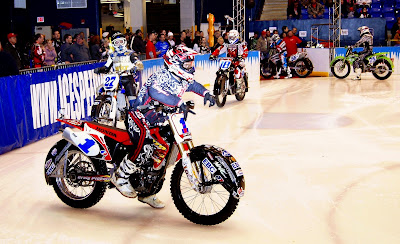 The stage is now set for what could be the most exciting and dramatic conclusion to a World Championship ice racing season in the sport's 36 year history. Two World Champions will be crowned Saturday night after 2 1/2 hours of high speed action packed racing has been contested.
The thoroughbreds of ice racing are the exotic Manufacturers World Cup Motorcycles. Lightning quick state-of-the-art bikes with powerful 4-stroke engines that propel riders from 0-60MPH in less than 3 seconds - on ice! These lightweight aluminum framed factory race bikes are made by the world's leading manufacturers including Honda, Yamaha, Kawasaki, Suzuki and others. The engine size and overall bike weight, wheel sizes and machine dimensions are very similar with all the different marks creating parity on the race track. Creating an atmosphere of parity with the machines allows the racer and his tuner's talents to be showcased and not so much the motorcycle. 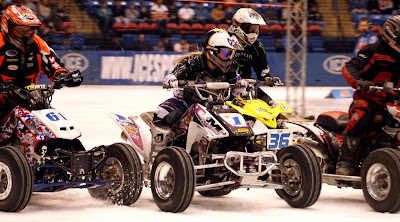 
The Outlaw Quads offer racers and fans rough, no holds barred, anything goes competition and they attract some of the most colorful characters in all of racing. Riders hoping to spoil Mandy's night and win the big cash are Chuck Calvert from Madison, WI with his Harley-Davidson V-Twin powered "Thunder Quad"; "Stuntman" Ken Remer from Burlington, WI; team "Kansas Tornados" Dusty Crouch, Justin McGilton and Kevin Smith all from Topeka; Mark Blythstone and Jason Fisher from near by Indiana, PA just to name a few.

CLICK HERE or Tickets are available at the War Memorial Box Office, Ticketmaster.com, By Phone at 800-745-3000 or at all Ticketmaster Outlets. The Greatest Spectacle On ICE!tm gets underway at 7:30PM sharp. Thrilling racing excitement the whole family will enjoy!

Special amateur classes are offered to local racers wanting to give it a go in front of the hometown fans. If you have a quad and want to be part of the show contact ICE at www.icespeedway.com.