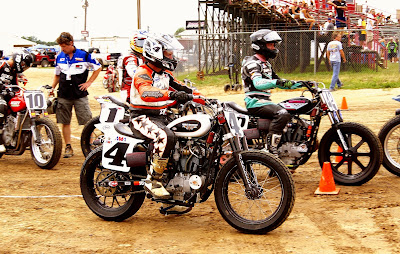 7-Time AMA Grand National Champion Chris Carr prepares to roll out for the first practice session at round 11 of the 2011 AMA Pro Flat Track Harley-Davidson Insurance Grand National Championship presented by Motorcycle-Superstore.com at the I-96 Speedway in Lake Odessa, MI. on July 23 in what would be his last appearance at the Michigan half-mile event.  With The Prince of Peoria hanging up his steel shoe on a full-time basis after the season-ending round at the Pomona Half-Mile, no longer will fans of The Champ get to see the #4 American Motorcyclist Assoc/Classic H-D/DFW Honda/Arai-sponsored rider perform at the top level on his XR750 on a regular basis.  And being a long-time fan of the sport, that is a very sad thing.

With seven championships and 78 wins in the oldest form of motorcycle racing in the United States, Carr sits second in the all-time wins and championships-won list, behind 9-Time AMA Grand National Champion Scotty Parker, who himself amassed a total of 94 wins in a career that spanned over three decades.  The transplanted Californian, who grew up around west coast flat tracks such as the Lodi Cycle Bowl and the Sacramento Mile, has called Fleetwood, PA. his home for some time now.

In a storied career as a pro that saw him earn the AMA Flat Track Rookie of the Year award in 1985, the man also had considerable talents while road racing for the Harley-Davidson factory in AMA Pro Road Racing in the mid-late '90s and became the fastest man on two wheels at the Bonneville Salt Flats in 2006.  Carr holds the distinction of being the first and only man to put a Harley-Davidson VR1000 on the pole for an AMA Superbike Championship event at the Pomona round in '96 and also won the AMA Superbike Rookie of the Year award at the end of the '95 season.

While it is widely known now that his former tuner and close friend, Kenny Tolbert, will be fielding bikes for '11 AMA Pro Flat Track Rookie of the Year Brad Baker for the '12 season, Carr is still on the outside looking in for what may come of his career post-retirement.  Admitting when he made his retirement announcement at the beginning of the '11 season that he may still contest a few rounds after retirement, Chris' passion for the sport will hopefully and eventually see him return as a team owner and/or mentor for some of the up-and-coming riders.

Thanks as always go out to one of my closest and best friends, Larry Lawrence, for putting together this great interview with former 7-Time Champ Chris Carr, who talks about his past in racing, and his future with the sport as we know it, over at Cycle News.com's digital edition for the week of February 7: