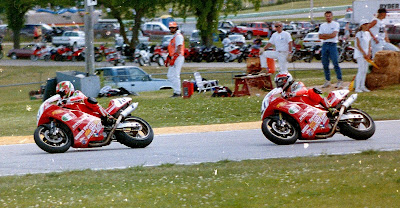 At the Coca-Cola Super Cycle Classic in Elkhart Lake, WI., Corser on the #19 Ducati Motorcycles/Pro Grip/Dunlop/Fast By Ferracci-sponsored Ducati 955 leads team mate Picotte on the #21 Ducati/Fast By Ferracci-backed Ducati 955 early in the Superbike main event heading into turn 14. Picotte would go on to take the win after Jamie James on the #2 Vance & Hines Yamaha was docked for passing under the yellow just out of turn 14 when team mate Colin Edwards crashed out of the event. Corser would finish 4th after over-cooking his brakes at the four mile circuit. Almost ironically, Corser would go on to beat James for the title at the season-ending round at Road Atlanta when a mechanical on James' bike forced him to drop back in the pack.

The man from New South Wales, Australia would head to Europe for the '95 season contesting the World Superbike Championship, where in '96 he won his first of two titles while riding for the Promotor Ducati factory team. He would grab his second World Superbike Championship in '05 while riding for the Alstare Corona Suzuki team.

A big shout out and thanks goes to Larry Lawrence and his Cycle News Archives column as he hits a home run with this trip back in time to the '94 AMA Superbike Championship when Troy Corser appeared on the scene in America to take on the rest of the big horses in the premier road racing series in the U.S.

Thanks to LL and CN for this great trip down memory lane: