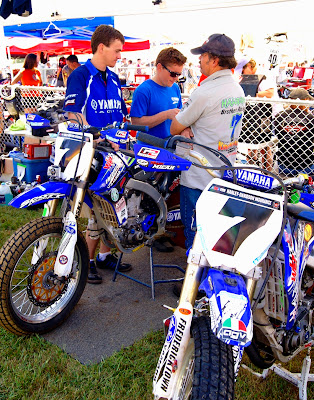 Sammy Halbert and the crew of his #7 Woody Kyle Racing/Fredericktown Yamaha/AGV/Kings Kustoms-sponsored Yamaha YZ450F work on his 'A'-bike in preparation for round 14 of the 2011 AMA Pro Flat Track Harley-Davidson Insurance Grand National Championship presented by Motorcycle-Superstore.com at the Peoria TT on August 21.  Halbert qualified 8th on the day just over .5 seconds behind fast man and eventual event winner, Henry Wiles in a field of 39 riders that took a run at qualifying for the oldest continual stop on the series' schedule.

Finishing second in his heat behind Jared Mees, Sammy came into contact with another rider and finished the heat with a loose exhaust.  Getting his machine back to the pits, the team got it back together in time for the Dash event, where he went on to finish 5th behind Mees, Wiles, Jake Johnson, and Rob Pearson.

In the National main event before the as expected strong crowd at the Illinois amphitheatre arena, it was business as usual for the Washington resident as he battled with eventual runner-up Mees and defending Grand National Champion Jake Johnson, before Mees got away in his trek to try and run down winner Wiles.  Sammy got the better of the defending champ in finishing 3rd on the day for the final podium spot in victory circle at the Peoria Motorcycle Club.


Sammy Halbert Racing announced the signing of a new clothing sponsor for the 2012 AMA Pro Flat Track Harley-Davidson Insurance Grand National Championship presented by Motorcycle-Superstore.com season.  Kicking off with a doubleheader round at Daytona on March 15-16, Sammy will be sponsored by The South Ass brand of clothing out of his home state of Washington, which should help him to better return to Daytona Beach and defend his doubleheader sweep from the 2011 season opening rounds.

"The South Ass is a perfect match for my team," said Halbert, who will not only be defending his Singles title but ...also gunning for the Grand National Championship in 2012.
"It's a brand that goes against the establishment, and I've always been a non-conventional kind of racer.  I love wearing The South Ass clothing and I know my fans will too."

The South Ass was established in Halbert's home state of Washington in 2009 by a group of friends who were sitting around a campfire and noticed all their kids were wearing the same brand of apparel.  A few glasses of wine later, they decided to create their own brand: The South Ass.

As part of the deal, Halbert will promote the brand to his fan base and feature The South Ass logo on his bikes and leathers.