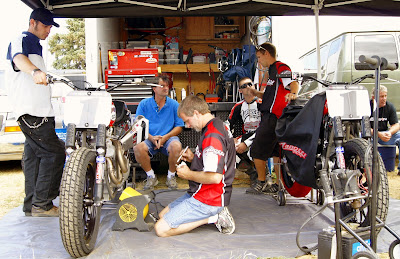 Zanotti Racing crew chief Ted McDermitt gets some help on one of the team's XR750s while the rest of the team talks shop at the rear of the team's transporter just after qualifying had wrapped up for round 16 of the 2011 AMA Pro Flat Track Harley-Davidson Insurance Grand National Championship presented by Motorcycle-Superstore.com at the Springfield Mile II.  Rider Jake Johnson had just qualified his #1 Zanotti Racing/Schaeffer's H-D/Boughner Racing/Motion Pro-sponsored mount in a respectable 11th place spot, just shy of .5 seconds behind fast man Kenny Coolbeth, Jr. on the factory H-D machine.

There was still plenty of racing to go, as Jersey Jake brought the #1 machine home in the 3rd spot at the Illinois State Fairgrounds mile oval, for what was one of over 15 top-5 finishes on the season in route to winning his second consectutive AMA Grand National Championship, being the first rider since 7-Time AMA Grand National Champ Chris Carr to win successive overall championships in the decades old series (Coolbeth won the Twins Championship from '06-'08.)

With wins at the Salinas and Springfield TTs and at the Calistoga and Pomona half-miles on the season, The Champ showed early in the season that his '10 championship year was not a fluke, and his ability to bring it home with solid runs throughout the season was a testament to his ability as a rider, and Dave Zanotti's ability to supply great machines and a solid crew in McDermitt and former AMA Grand National competitor Mike Hacker.


Johnson will be looking to make it three-in-a-row for the 2012 AMA Pro Flat Track Grand National Championship season and the Pennsylvania resident and Zanotti Racing crew will be ready to get back at it in Daytona next month.  AMA Pro Racing has been running some rider profiles over the long winter break and you can check out what they have on Jake here while you wait for the racing season to get started: 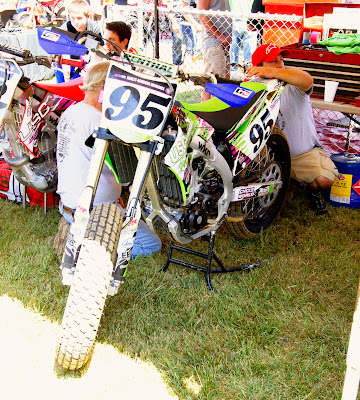 JD Beach relaxes in the back of the USC Racing pit area at round 14 of the 2011 AMA Pro Flat Track Harley-Davidson Insurance Grand National Championship presented by Motorcycle-Superstore.com at the Peoria TT while the crew goes about getting his #95 Universal City Kawasaki Motorsports/Morlandt Electric/Alpinestars/
Arai-sponsored KX450F ready for some heat race action.  Beach turned a 3rd place finish in his heat into a direct transfer to the National main at the oldest track on the circuit's calendar, and went on to finish 13th in the final event.

During the 2011 season, Beach still managed to qualify for 7 events on the AMA Pro Flat Track calendar while spending the better part of the season competing in the AMA Superbike Championship while riding an Attack Kawasaki ZX-10R, which he brought home in the 12th overall spot in his rookie season in the big bike class.

For the 2012 season, Beach will again be contesting some rounds of the AMA Pro Flat Track Series, while also competing in the AMA Pro Road Racing Daytona SportBike Series on a RoadRace Factory/RedBull-sponsored Yamaha YZF-R6.  He is one of the early entries already posted for the Daytona 200 scheduled to run on Saturday, March 17.


You can check out JD's rider spotlight/profile here from AMA Pro Racing: 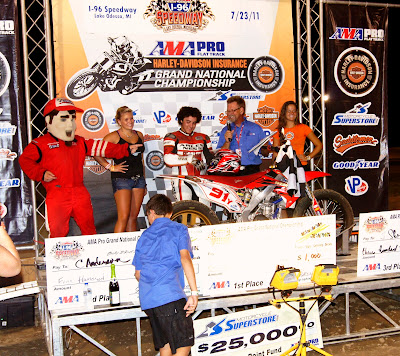 Martin took his #91Y Weirbach Racing/General Engineering/Barnett Clutches/Spectro-backed Honda CRF450R to the win on the half-mile by over 4.3 seconds ahead of runner-up Conner Anderson, in what would be his second of three-in-a-row wins on the season (Hagerstown, Sacramento) that would catapult him into the championship points lead, a position he would never relinquish for the rest of the season.

With his 2011 AMA Pro Singles Championship in his back pocket, the popular California resident will be moving up the the Expert class for the 2012 season after two years of competition in the Pro Singles Series.  Not too long after the season wrapped at the Pomona Half-Mile in mid October, Martin and the Bonneville Performance Triumph flat track team announced they would be joining together to contest the 2012 AMA Pro Flat Track Grand National Championship Twins Series season.

Martin and the team contested a southeast Georgia race in late October for their first time working together at the track, and have also been testing in the Carolinas during the off-season getting ready for the first Twins Series event in late May at the Springfield Mile I round.  Double M is slated to wear National #91 for his season run at the Saddlemen Rookie of the Year Award, an award that is shared by former Pro Singles Champ Brad Baker, PJ Jacobsen and Matt Weidman, just to name a few.