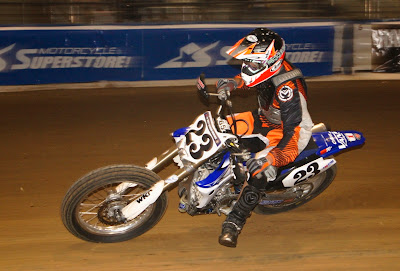 Jeffrey Carver, Jr. lays down a lap in qualifying on his #23 Van's Yamaha/Woody Kyle/Yamaha Motor Corp GYTR/Carver's BBQ-sponsored YZ450F at the DuQuoin Indoor Short Track, during round 3 of the 2011 AMA Pro Flat Track Harley-Davidson Insurance Grand National Championship presented by Motorcycle-Superstore.com on April 16.  The '10 AMA Pro Motorcycle-Superstore.com Pro Singles Champion qualified a respectable 24th out of the 55 riders that laid down a qualifying attempt for the event, of which 48 would make the final cut.

The Alton, IL. resident had a rough go of it the rest of the day when he DNF'd his heat race and finished out of a qualifying spot for the National main in his semi race with a 6th place finish.  Carver recovered finely through the rest of the season and ended his rookie Expert season in the 12th overall spot in the championship standings.


Living just over 100 miles from the Southern Illinois Center at the DuQuoin State Fairgrounds, Carver has been taking advantage during the off-season by running Steve Nace Promotions' 2012 AMA Racing Indoor Dirt Track National Championship Series, and should be on-hand this weekend when round 5 kicks off Saturday, February 11 with practice starting at 5 PM CST.  There is also a practice session scheduled for Friday night, February 10 from 6-9 PM CST.  Some of the other riders that have been running the indoor series include JD Beach, Rob Pearson, Dan Ingram and JR Schnabel.

If you are in the area and looking for some big excitement and a rush of adrenaline to get you through until Daytona on March 15-16, head over to this great little facility and see a well-run and tight program as put on by the folks at Steve Nace Racing Promotions. 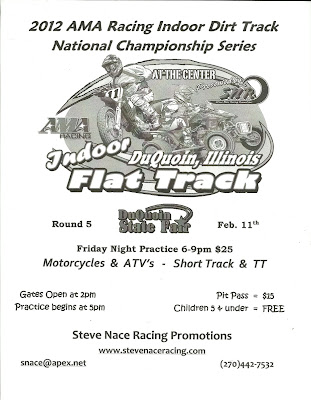 You can view results and other info about Steve Nace Racing and some of the other series they promote here via their official site: