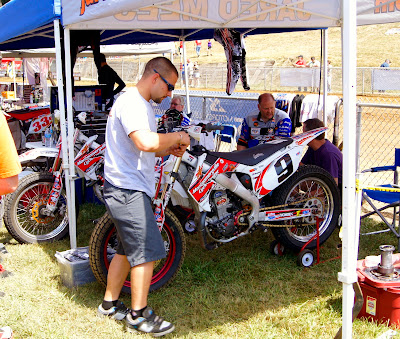 Round 14 of the 2011 AMA Pro Flat Track Harley-Davidson Insurance Grand National Championship presented by Motorcycle-Superstore.com at the infamous Peoria TT found Jared Mees working in and about his pit area in preparation for the day's activities about to begin at the central Illinois facility.  The Jammer had a very productive day on the #9 Lucas Oil/National Cycle/Rogers Lake/Montgomeryville Cycle-sponsored Honda CRF450R in winning his heat race over Sammy Halbert, JD Beach and Chris Carr and taking the win in the Dash for Cash event over Henry Wiles and Jake Johnson.

Mees ended the day 2nd in the National main behind 7-Time Peoria TT winner Wiles, with Halbert, Johnson and Illinois resident Rob Pearson rounding out the top 5.  Mees' crew chief Brent Armbruster can be seen sitting in the back of the pit area talking before getting ready to help his rider for the day.

One of the busiest men in flat track-or any form of motorcycle racing for that matter-the '09 & '11 AMA Grand National Twins Champion also contests a handful of other events throughout the year.  Having just claimed his fourth ICE Speedway Series Manufacturers Cup Bike Championship, he also spends time racing some of Gene Romero's West Coast events as well as a few of Eddie Mulder's west coast races.  During the 2011 season, Mees finished 2nd in the AMA Pro Flat Track Grand National Championship Series, while taking the Twins Championship for his run of five series wins throughout the year on his Rogers Lake Racing fleet of XRs.

But where he probably really cleaned house at was while riding in Steve Nace Racing's AMA All Star Flat Track Series throughout the season, where he won the points battle in both the Expert Twins and Expert Singles classes by a landslide.

Look for Jammin' Jared and a host of other Grand National regulars to compete in the 2012 Steve Nace Racing AMA All Star Flat Track Series, of which the press release and schedule you can check out below.


The 2012 AMA Racing All Star National Flat Track series schedule. We will be coming to a track near you.

Once again, Round 1 of the AMA Racing sanctioned All Star National Flat Track Series will kick off on the revered half mile of Oglethorpe Speedway Park in Savannah, GA on March 9th to signal the start of Daytona Bike Week 2012. Then round 2 of the series will move South to Volusia Speedway Park in Barberville, FL on March 11th.
May 19th Round 3 of the series will return to Little Rock, AR; home of Paul Covert's Crooked Creek Raceway. Previous winners on this red clay short track include Chris Carr and J.D. Beach. Paul's race always includes a "Bag Full of Money" Dash for Cash. Can J.D. make it two in a row in 2012?
Round 4 of the All Star Series, scheduled for June 2nd, will move to a new venue for 2012. The Calumet County Speedway in Chilton, WI will host the second short track of the season. This race will be in conjunction with the Dairyland Classic to be run on June 1st at the Sheboygan County Fairgrounds in Plymouth, WI.
Round 5 will take the All Star National Flat Track Series to Peoria Speedway in Peoria, IL on June 15th as we return to one of last year's most competitive tracks. This will kick off another double header race weekend that will end up at the beautiful grounds of the Peoria Motorcycle Club's famous TT track on June 17th.
Once again the 4th of July will be celebrated in Frederick, MD on the limestone half mile; site of the Al Wilcox Memorial 90th Annual Barbara Fritchie Classic. Two days later, on July 6th, the All Star National Flat Track Series returns to Winchester Speedway in Winchester, WV just down the road from the GNC Hagerstown half mile scheduled to be run on July 7th.
Another new track for 2012 will take the series to picturesque Billings, MT on July 21st to run on the totally resurfaced short track located on the grounds of the Billings Motorcycle Club.
Round 10 will be back in Peoria, IL for the second time in 2012 at the always exciting Peoria Speedway short track. This race will take place on Friday Aug. 10th leading up to the AMA Pro GNC Peoria TT event on Aug. 12th.
This year the AMA sanctioned All Star National Flat Track Series will finish up in the Northeast on two tracks new to the series. On Sept. 28th Trail-way Speedway in Hanover, PA will host the first race of the weekend on their historic short track.
Then we will finish out the 2012 season with over $25,000 available to the racers on the limestone half mile at the York County Fairgrounds in York, PA. This race will run in conjunction with the Harley Davidson Factory Open House and the York Fall Motorcycle Rally.


The AMA sanctioned All Star National Flat Track Series was formed in 2010 to take the place of the AMA Hot Shoe Series when it was discontinued. Our goal is to provide AMA Pro & Expert racers venues to race at during the off weekends and in conjunction with AMA Pro Racing Grand National Championship Flat Track Series, as well as bringing the sport of Flat Track Motorcycle Racing to new venues and potentially new fans across the US.