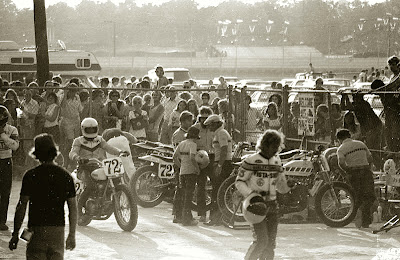 When the AMA Grand National Championship/Camel Pro Series rolled into the Indiana State Fairgrounds in August of '75, the pits were abuzz with the presence of a group of specially built flat track two-stroke machines that were the brainchild of Yamaha flat track manager Pete 'The Godfather' Schick, Champion Frame's Doug Schwerma, and former 250CC World Champion Kel Carruthers.  With the Yamaha XS650-based parallel twin losing in the fight against the might of the Harley-Davidson XR750, even premier rider Kenny 'The King' Roberts was facing an uphill battle to try and retain his #1 plate for a third consecutive year.

With other riders on-hand getting a chance to try out the 125hp TZ750s including Steve Baker, Randy Cleek, and Rick Hocking, Yamaha was hoping to stack the deck against the H-D factory onslaught.  All but Roberts missed the shot, and The King had to go through his heat race, a semi race, and then come back to win his LCQ race in order to put the big yellow and black #1 bumblebee into the 18 rider National main event.

The rest as they say, is history, as Roberts rode the race of his life and career to eventually pass Harley teamsters Corky Keener and Jay Springsteen within inches of the checkered flag after 25 fast and furious laps to take what is still probably considered his premier motorcycle racing win, in front of a crowd estimated in the day at close to 18K paying butts in the seats, none of which got used that night as everyone was on their feet cheering on The King.  Roberts may not have retained that coveted #1 plate at the end of the season, but he re-wrote flat tracking history on that hot August night.

In the shot above, you can see Roberts talking (dead center of shot) with his Team Yamaha factory team members, including his long-time tuner Carruthers, in the pits at Indy on that historic day, with the #1 Team Yamaha TZ sitting ready to go.  Roberts' then-protege, Skip Askland, was pitted next to The King as you can see one of his #72Y machines just behind the Yamaha teamsters.

Unidentified rider #72P rolls through the pits on his Yamaha parallel twin, while soon-to-be Rookie of the Year (and future 3-Time AMA Grand National Champion) Jay Springsteen walking towards his mount in his Vista Sheen #65X leathers.


With the sudden cancelation of the Lucas Oil Indy Mile round of the 2011 AMA Pro Flat Track Harley-Davidson Insurance Grand National Championship presented by Motorcycle-Superstore.com due to the tragic incidents several weeks earlier at the Sugarland concert, Indy's return for a fourth date in the new millenium would have to wait.  But as was announced with the newly released 2012 schedule in late December, the Indy Mile is back again and will return on August 18 along with the Indiana State Fair over the RedBull Indianapolis MotoGP weekend.

AMA Pro Flat Track Is Back In Indy...


Tickets for the 2012 Lucas Oil Indy Mile On Sale Now!
A press release issued by the The Promotion Company-Family Events, promoters of the Indy Mile AMA Pro Flat Track event:

The Legendary Lucas Oil Indy Mile will run again on Saturday, August 18, 2012 during the Indiana State Fair, and again coinciding with The Red Bull Indianapolis GP weekend.
INDIANAPOLIS, Ind. - Advance tickets go on sale February 17 at 10:00 am EST, for the return of the Lucas Oil Indy Mile AMA Pro Flat Track Grand National at the legendary Indy Mile track at the Indiana State Fairgrounds in Indianapolis, Indiana on Saturday, August 18, 2012. The Lucas Oil Indy Mile returns as a featured event of the Indiana State Fair, and again coincides with the Red Bull Indianapolis GP weekend. Activities for the Twins division of the AMA Pro Harley-Davidson Insurance Grand National Championship presented by Motorcycle-Superstore.com and AMA Pro Motorcycle-Superstore.com Pro Singles will be begin with gates opening at 2:00pm, timed-qualifying from 3:00pm-5:00pm, opening ceremonies 7:00pm with the first race at 7:30pm.
Glorious memories of the Indy Mile go back for decades. Top riders have always highly coveted a win at this race, long considered the "Crown Jewel" of AMA Pro Racing's oldest and most tradition-rich professional racing series. The race returned to the State Fairgrounds in 2008, after a nine-year hiatus, to large crowds and much fanfare. Last year's race was canceled due to the State Fair stage collapse, but will now return not only to the fairgrounds, but also as an official Indiana State Fair event thanks to the cooperative efforts of Fair officials, AMA Pro Flat Track, Peoria Motorcycle Club and Family Events, the race producer.

Flat Track is a uniquely American form of motorcycle racing. Riders pitch their machines sideways into the turns, inches apart from each other, at speeds of over 120 mph. Drafting on the long straights keeps the field close and provides the closest finishes in motorcycle racing. The legendary Indy Mile Flat Track is renowned for fast racing, intense drafting wars and multiple lead changes on every lap. Often a photo finish camera is needed to reveal the winner at the end of the furious 25-lap finale.

The latest information on the Lucas Oil Indy Mile AMA Pro Flat Track Grand National and a schedule of events may be found at www.IndyMile.com, www.familyevents.com, www.amaproracing.com, www.in.gov/statefair or by calling (317) 236-6515.