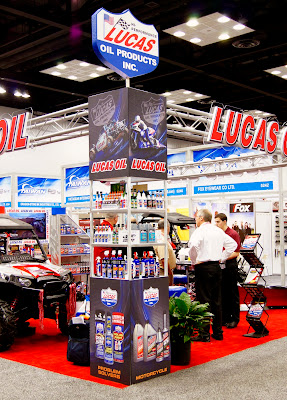 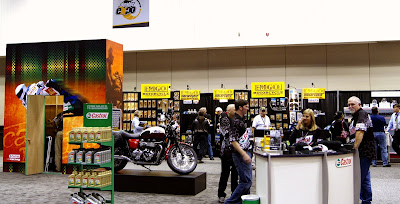 
Demonstrating the continuing value of the pre-owned sector and the increased spending of Dealer Expo and American V-Twin Dealer Show attendees, National Powersport Auctions (NPA) hosted a live pre-owned vehicle auction, securing more than $1.28 million in two hours, from the sale of 152 Harley-Davidson and metric motorcycles to attendees.
The 2012 Dealer Expo and the American V-Twin Dealer Show offered both exhibitors and attendees greater value than ever before with more features including: product demonstrations; a live build on the Builder’s Stage; fashion shows; the Ultimate Dealer Custom Bike Show; educational seminars by Dealership University valued at $15,000 per attendee; a Saturday night industry party at Lucas Oil Stadium; and more. In addition, 193 registered members of the media – the largest media turnout in Dealer Expo history – attended Friday’s dedicated media preview and stayed to cover the powersports weekend extravaganza, generating more news than ever about the impressive lineup of innovative new products making world debuts.
The 2012 Dealer Expo and the first-ever American V-Twin Dealer Show destination event took place February 17-19, 2012, at the Indiana Convention Center, 1000 South Capitol Ave, in Indianapolis, Indiana.
Dealer Expo and the American V-Twin Dealer Show are open to qualified members of the powersports retail trade.
For more information please visit www.dealerexpo.com, or www.vtwinshow.com.