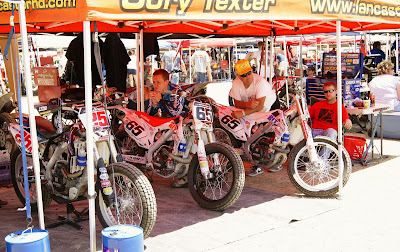 Round 6 of the 2011 AMA Pro Flat Track Harley-Davidson Insurance Grand National Championship presented by Motorcycle-Superstore.com saw the series convening on Memorial Day, Monday May 30 for the Springfield TT, after a rain delay from the previous Saturday caused the round to be pushed back and having to run after the Sunday Springfield Mile I round.  Considering the amount of water that had pooled up inside the Springfield Rodeo/Multipurpose Arena, AMA Pro Flat Track and the track crew headed up by former AMA Grand National competitor and National #42, Steve Morehead, did one heckuva job in getting and keeping the track in-shape for the 53 riders that had entered the event.

Relaxing in between sessions in his pit area, Cory Texter leans over his #65 RLT Racing/Herr's/Invisible Glass/Penske Racing-sponsored Honda CRF450R while looking over his sister Shayna's #25A Pro Singles mount while the rest of the crew takes a break under the awning on a hot and drippy day at the Illinois State Fairgrounds.

CTex, who will be running the full schedule in the 2012 AMA Pro Flat Track Harley-Davidson Insurance Grand National Championship presented by Motorcycle-Superstore.com season after a partial run of the previous year, has been doing some off-season testing and riding preparing for the upcoming 19-scheduled round year.

He is heading to DuQuoin, IL. with his RLT Racing mounts this weekend in what will most likely be his last on-track time before heading to Daytona for the season-opening rounds on March 15-16.  Steve Nace Racing is wrapping up their excellent running of the indoor rounds inside the Southern Illinois Center this weekend, with a practice schedule set for tomorrow night, Friday February 24 from 6-9 P.M. CST and a full-schedule of racing set for Sunday, February 26.  Quads and karts will take to the track on Saturday to fill out a busy weekend of racing at the DuQuoin State Fairgrounds facility.

Cory will be joining regulars JD Beach, Jeffrey Carver, Jr., Rob Pearson, Ryan Wells and Indy's own Dan Ingram for the final round of the season before all pack up to head to Daytona in March. 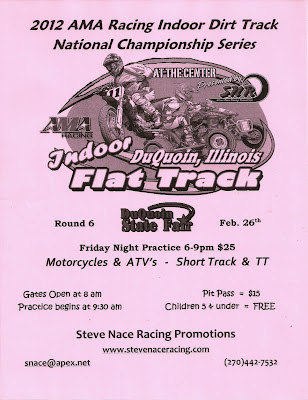 You can check out the results from previous rounds of the 2012 AMA Racing Indoor Dirt Track National Championship Series promoted by Steve Nace Racing Promotions here: