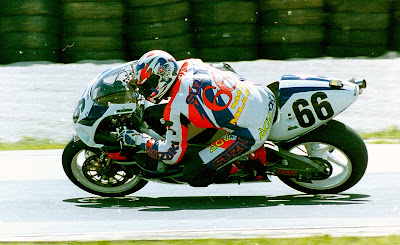 Mat Mladin hammers the throttle coming out of turn 8 on his #66 American Suzuki/Yoshimura USA/Dunlop/Showa-sponsored GSX-R750, during qualifying for the AMA/MBNA Superbike Championship Series during the Coca-Cola Super Cycle Classic weekend at Road America in June '99.  In the first season running the fuel-injected Suzukis, Mladin and the Yoshimura team would go on to win their first of seven championships together.

After riding for the Fast By Ferracci Ducati team, Mladin hooked up with the Yoshimura Suzuki team in a match made in heaven, earning the '99-'01, '03-'05 and '09 AMA Superbike Championships.  Mladin, who will turn 40 next month just over 2 1/2 years after hanging up his leathers, is also the all-time winner in the premier road racing class in America with 82 wins.

To a lot of riders and fans, Mladin was the brash and cocky-type in his years of dominating AMA Superbike racing, but he was a very strong advocate in helping to progress safety at the tracks in America when many were sorely in need of improvements.  Standing up for the safety of the riders, Mladin wouldn't back down when it came to the needs of the riders and the lack of safety improvements around the tracks in America.  He helped to escalate many changes and improvements in his years of kicking hind-end in the States.

Having retired at the end of the 2009 season after winning his 7th title in the class, Mladin now runs his businesses in his home country of Australia while also enjoying his love of flying many different types of aircraft.

Cycle News' Darryl Flack had a chance to catch up with 7-Time AMA Superbike Champion Mat Mladin recently, and you can check out what 'the man from down under' is doing these days back home in Australia, right here: