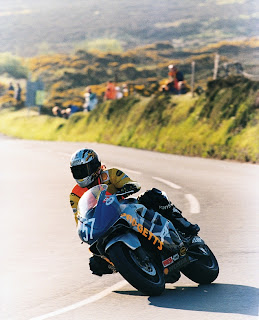 Some of our regular readers may be familiar with one of the sport's true journalists, Mark Gardiner whom I have had the pleasure of being to help out in the past with some of shots out of my archives over the years.  Mark has been kind enough to feature some of my work in the now-defunct RoadRacerX.com and of late while putting together more of his fine pieces on racing's past on Motorcycle-USA.com in his infamous 'Backmarker' column.

A little over six years ago, Mark released a book of his exploits of traveling to and competing in the Isle of Man TT races held annually across the pond for over a century now.  That book, 'Riding Man' tells the story through his eyes of how he 'shucked it all' and headed over to compete in the oldest true road racing event in the world and what he went through to live and complete his dream.

Mark just announced that there is now a second printing of 'Riding Man' for us old-types that still prefer the written work in-hand as opposed to reading on an e-reader.

One of the great reads in motorcycle racing, the book details his accounts with the locals, the organization that puts on this great event and living and prepping on the Isle for his debut in the June 2002 version of the classic TT races.  The book is highly recommended even for the casual fan of the Isle of Man TT or even of Mark's wonderful work and will give the reader true insight what it is like to take on such a daunting task.

Pictured above is a shot of Mark on his Padgett's Victoria Road Garage Honda CBR600 that he campaigned in the Junior and 600 Production classes at the Isle of Man TT.


Riding Man is back in print

Riding Man, Mark Gardiner’s memoir of an everyman’s effort to qualify for the Isle of Man TT, is back in print.

The book focuses on a year in the life of Gardiner, an ad agency Creative Director and club-level racer who quit his job, sold everything he owned, and moved to the Isle of Man in an effort to qualify for the TT. He did, finishing two races in 2002. Gardiner admits that he may have been the least talented, most cowardly rider ever to achieve that goal.

“Ironically, Peter Egan made ‘Riding Man’ the subject of a very flattering column in Cycle World almost on the day that the first edition of the book sold out,” laughs Gardiner. “At one point in his column, he wrote ‘I’ve always been drawn to stories like this, where people make a big change in their lives just by taking resolute action -- Bob Dylan and Jack Elliot leaving their comfortable middle-class backgrounds to hit the road and become ramblin’ folk singers like Woody Guthrie; Winston Churchill rejecting his apparent fate... Teddy Roosevelt deciding to become a cowboy...’ I was really glad that he liked the book, but a bit embarrassed by even an indirect comparison to Dylan or Woody Guthrie!”

In the last couple of years, Riding Man’s also attracted attention in Hollywood. After Tom Guttry (Airspeed Productions) became fascinated by the story, he pitched it to Mark Clayman of One Way Productions (he produced the Will Smith film ‘Pursuit of Happyness’ .) Guttry and Clayman then teamed up with another veteran producer Bob Teitel, of State Street Productions. That trio pitched it to Jason Blumenthal, at Escape Artists (A Knight’s Tale, and The Taking of Pelham 1,2,3). At this point, Blumenthal and Escape Artists are looking to ‘attach talent’ as they say in the film business.

After spending a year out of print, readers who still prefer their books on paper can now order Riding Man again.  The book’s available on Amazon, but readers who buy off the www.RidingMan.com web site will get signed copies, and bikewriter.com will cover the shipping costs.  That gorgeous cover illustration is by another avid motorcyclist, commercial illustration star Douglas Fraser.

“I was hoping to wait for an announcement on the film before releasing a second edition,” says Gardiner. “But putting together movie deals takes forever. Meanwhile I saw a mint copy of the first edition sell for a hundred bucks on Amazon. At that point, I realized two things: first, that if prices got any higher my mom was going to sell her personal copy and second, that it was time to print a second edition.”

Later this month, Gardiner will read from Riding Man in Tacoma at LeMay/America’s Car Museum. The museum is holding a cool motorcycle event, ‘Meet at the Ace’, August 24-26.
The second edition is already available at Amazon.com.
Readers can get a signed copy directly from Mark, with free postage, at www.RidingMan.com, or by visiting his popular blog at www.bikewriter.com.

For more information about the Meet at the Ace event, visit www.LeMayMuseum.org.
Posted by Stuman714 in Indy at 3:00 PM