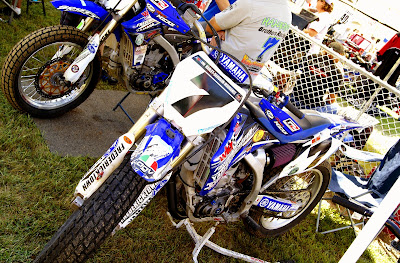 Slammin' Sammy is doing one heckuva job in defending his '11 Singles Series Championship by totally dominating at his home track and moving within 2 points of Singles Series Championship points leader Jared Mees (81-79) in his quest to 'double up' on the DTX-based 450s, and also moving within 25 points of overall championship leader Mees (162-137 points), with defending and 2-Time AMA Grand National Champion Jake Johnson splitting the two men while lying in the 2nd-place spot (147 points.)

With the series half-way into the 2012 season, the time is now to start making your chess moves in the greatest racing series on wheels in the world, and Sammy's been making some dominating moves since his Springfield Mile I crash that left him with only 1 point scored at the first Twins Series event of the season.  The next stretch run of four races within 22 days (Peoria TT, August 12/Indy Mile, August 18/Springfield Short Track, September 1/Springfield Mile II, September 2) should give everyone a pretty good idea of where the cards and pieces are going to fall for the run to the 2012 AMA Pro Flat Track Grand National Championship.

In the shot above, Sammy's #7 Woody Kyle Racing/Fredericktown Yamaha/AGV/Kings Kustoms-backed Yamaha YZ450Fs sit in his pit area getting some final attention before the start of racing action at round 14 of the 2011 AMA Pro Flat Track Harley-Davidson Insurance Grand National Championship presented by Motorcycle-Superstore.com season at the Peoria TT on August 21.  Halbert scored a very-strong 3rd-place finish in the penultimate round of the 2011 Singles Series Championship to all-but take the '11 crown before even turning a wheel at the Springfield Short Track round just 13 days later.

You can read the full press release below thanks to AMA Pro Flat Track as the series prepares to roll into the Peoria TT on Sunday, August 12 in round 9 of the 2012 Rolling Thunder Show.