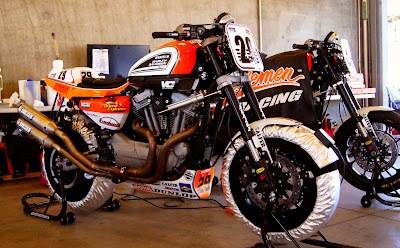 Tyler O'Hara's #29 JCR/Scrubblade/Bartel's H-D/RS Taichi-sponsored XR1200s sit in the garage area while being prepped for the second testing session held at the Indianapolis Motor Speedway on Saturday, August 11, 2012.  O'Hara led all of the 19 riders on-hand for the special test alloted to the series for what will be their second appearance at the Red Bull Indianapolis MotoGP Weekend over the August 17-19 weekend.

This year's event already has 32 riders pre-entered for the XR1200 Series' return trip to the Brickyard, with the added $50K purse bringing out a strong field to contest the undercard on the MotoGP weekend's 5th annual trip to the fabled track on West 16th Street in Speedway, IN.

O'Hara led the points standings over Kyle Wyman and Michael Barnes after the Mid-Ohio round several weeks ago, and with the points being re-set for the top-10 riders in the series to engage in a season-ending shoot-out, ala NASCAR's Chase for the Championship.  With Indy's two rounds and the remaining doubleheader rounds at New Jersey, Homestead and the season finale at New Orleans the rest of the racing for the season is sure to ramp-up the excitement starting with this weekend's largest-attended motorcycle road racing event on the North American continent.

You can check ou the full press release below thanks to AMA Pro Road Racing while you make your plans to head to the Racing Capital of the World to check out the weekend of speed on two wheels over the course of the three-days of what will surely be the best motorcycle road racing to be seen yet this season!

INDIANAPOLIS, Ind. (August 14, 2012) - The AMA Pro Vance & Hines XR1200 Series, a division of GEICO Motorcycle AMA Pro Road Racing based on the Harley-Davidson XR1200 platform, returns to Indianapolis Motor Speedway this weekend, August 17-19, 2012 for the second consecutive year to compete alongside the full complement of MotoGP classes in the Red Bull Indianapolis GP. This weekend's event is the only doubleheader on the 2012 calendar for the Vance & Hines XR1200 Series, and both races will be featured on SPEED in a one-hour broadcast on Sunday, August 19 at 5:00 p.m. ET/ 2:00 p.m. PT.

Last year's doubleheader at the famed Speedway featured intense battles by some of AMA Pro's best, and the drama will be intensified this year as the event features an expanded $50,000 purse and marks the start of the XR Showdown. With five races remaining the points for the top 10 riders have been reset to 1,000 each, leveling the playing field and creating a battlefield for the coveted No. 1 plate and associated $60,000 year-end prize fund. 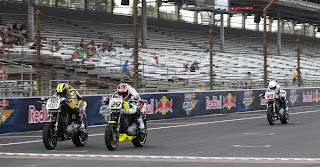 Many of the throaty twin-cylinders entered in the event completed a full day of testing on Saturday in preparation for the upcoming battle at the brickyard. Series top man Tyler O'Hara (JCR/ Scrubblade/ Bartel's Harley-Davidson) paced the day with a 1:55.914 and heads to Indy with confidence stemming from his breakout win in Race 1 last year.


"Everything was really good, we had a really good day with setup and I felt comfortable, that's the main thing," O'Hara said following Saturday's official series test. "I'm having a lot of fun, happy to be at Indy. It feels really good, the test was very productive and we made a lot of good changes. I'm very happy with the way the test ended. I have to thank JCR and Scrubblade, the ultimate windshield wiper blade."

If history serves as a benchmark, O'Hara is the man to beat but he will still have his hands full this weekend. Every podium spot in 2012 has been occupied by O'Hara, Kyle Wyman (KLR Group/ Spyke's Harley-Davidson) and Michael Barnes (MOB Racing/ Teterboro RAMS Harley-Davidson). Out of seven races, O'Hara and Wyman have claimed three wins apiece while veteran Barnes earned the remaining victory at Sonoma Raceway in May, his first GEICO Motorcycle AMA Pro Road Racing win in 16 years.

Topping the test's morning session was Bennie Carlson (Suburban Harley-Davidson) and the Wisconsin settled in for fourth fastest on the day behind O'Hara, Wyman and Barnes. Fourth in the standings before the XR Showdown points reset was Michael Corbino (XP Motorsports/ Rossiter's Harley-Davidson), who posted consistent times at the test good enough for fifth overall.


Fong isn't the only fresh Vance & Hines XR1200 Series entry joining the field for this standalone spectacular. Josh Guyer is backed by Harley-Davidson of Bloomington, a prominent local dealership steeped in racing history, while Lee Kuhn is fielding an entry with support from Jacox Harley-Davidson. Wrapping up the four-bike MOB Racing stable is first-time entry Christian Cronin.

Pete Cline (Team Ohio Racing) returns with RIDER Insurance / Oxford Consulting Group and RevZilla.com to grid up a Wounded Warrior-crewed Harley-Davidson XR1200 for the second consecutive race following a successful first outing at Mid-Ohio Sports Car Course. The team will be participating in the 4th Annual Night Before the Indy Mile Race Party on Friday, August 17, 2012 from 2 p.m. to 8 p.m. at the Indianapolis Southside Harley-Davidson.

The XR Showdown is a $60,000 year-end rider championship points fund supported by Vance & Hines and the Harley-Davidson Motor Company. The champion rider in the AMA Pro Vance & Hines XR1200 Series will be awarded the Number 1 plate along with $25,000 in prize money. The remaining $35,000 in the points fund will be paid out to second through tenth in the final point standings. Riders in the running include: O'Hara, K. Wyman, Barnes, Corbino, Estok, T. Wyman, Signorelli, James, Chisum and Carlson.