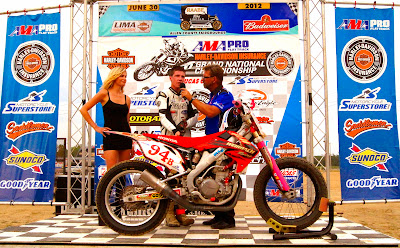 The New York State resident took part in his second mile event of his Pro Singles Championship career last weekend at the Cal Expo Fairgrounds in Sacramento, improving on his 10th-place finish from the Springfield Mile I round in late May by finishing in the 6th-place spot, in a race that was won by Shayna Texter, crossing the line to take the checkers just over 2.3 seconds behind the DFW Honda-mounted winner.

In his first full season of competition, Wells is proving himself quickly to be a quick study, at just over 16 years old.  After starting off the season at Daytona with a DNQ and a win, Wells has been on a strong run as the series gets into the meat of the schedule.  In the last three rounds (Lima, Hagerstown and Sacto) Wells has brought home finishes of 4th, 3rd and 6th-places, and has held on to the second spot in the Pro Singles Championship points tally for the last few rounds, and with the powerhouse Weirbach Racing team behind will undoubtedly be fighting for the #1 plate in the AMA Pro Motorcycle-Superstore.com Pro Singles Championship come season end.

You can check out Ryan and Weirbach Racing's official press release below, and then look for more out of this fine young man come the rest of the season, with the next event this Saturday, August 4 at the Castle Rock TT round.

On July 28th, the Weirbach Racing team traveled out to Sacramento, California for the historic Mile!  Showing up at my 2nd mile ever, I was still in need of figuring out everything that needs to be done to come out victorious.

We started out the day qualifying 12th which would give me the last spot on the front row.  In the heat race I immediately ran into the same problems with drafting that I also had in Springfield.  Struggling through the heat I finished 6th which would still be a direct transfer, but I knew I needed to figure it out coming main event time. 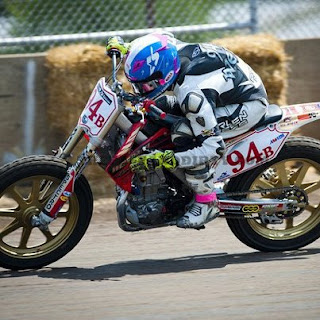 Ryan Wells is shown on the #94B Weirbach Racing Honda CRF450R during on-track activities in the Pro Singles Series at the Sacramento Mile on Saturday, July 28, round 7 of the 2012 AMA Pro Flat Track Harley-Davidson Insurance Grand National Championship presented by Motorcycle-Superstore.com season.  Photo courtesy of Weirbach Racing & Ryan Wells.


I started the main event on the very inside of the second row.  Out of the first turn I sat around 12th and finally figured out what I was missing this whole time with drafting.  I began picking off positions and worked my way up to 6th but ran out of time and finished there.

It was great to meet some of our west coast sponsors in person.  After this weekend we are in second place 11 points behind the series leader.


Big Thanks to all our awesome sponsors who continue to make my dream as a racer come true day after day!