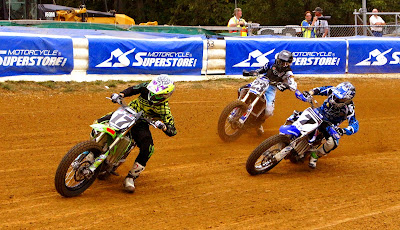 Round 9 of the 2012 AMA Pro Flat Track Harley-Davidson Insurance Grand National Championship presented by Motorcycle-Superstore.com season saw the series hit the 65th Annual running of the Peoria TT.  As was expected (by most) Henry Wiles on the #17 Don's Kawasaki/DPC Racing/Nick Nazzisi/Schiller's Tree Service-sponsored KX450F took the win again for his record-tying eighth time in-a-row to put his mark in the record books next to one of the icons of the sport, recently-retired 7-Time AMA Grand National Champion Chris Carr.

Wiles led Jared Mees, Jake Johnson, JD Beach and Sammy Halbert home in the 25-lap National main, winning by just over 6.6 seconds, after slipping wide with just a few laps to go in the final coming into turn one.  Wiles stated the track was slick and going to groove up quickly and had asked the blue crew at AMA Pro Flat Track to add a little water just before the green flag flew, but was denied due to the fact that rain was approaching fast and it was either get the show going or face a possible delay and/or cancelation of the main.  Obviously other then that one slip things worked out real well for the man who has now won 22 National main events throughout his career.

From the start of the day and almost throughout, Hammerin' Hank controlled and took-hold of his destiny to set the pace for what was an illustrious day for the Clio, MI. rider.  His only missive was not being able to win the Dash for Cash, which was controlled from the start by Sammy Halbert on his #7 The South Ass/Fredericktown Yamaha/GYTR/Van's Yamaha-backed YZ450F.  Halbert won the Dash over National main runner-up Jared Mees and Wiles, with Jake Johnson, JD Beach and Briar Bauman rounding out the 4-lap extra-points and money-paying event.

Pictured above in some heat one race action where Henry set fast time to earn the pole for the main shows what looks to be a close battle on lap 2 of the 10-lap heat race qualifier between Wiles, Slammin' Sammy and Jeffrey Carver, Jr. on the #23 Carver's BBQ/Twigg Cycles/Leo Welch/Kiesow Racing-sponsored Yamaha.  Carver followed Wiles and Halbert home into the 3rd-place spot to also earn his spot in the 18-rider main, where he eventually took a solid 11th-place finish.  Wiles eventually won the heat by just over 2.5 seconds after 10 laps.

Wiles win in this heat race was the fastest of the day by just .082 seconds, with a spread between heat two winner Johnson and heat race three winner Mees of only .311 seconds after each 10-lap heat.  Those figures give you a real good idea of how close the racing action is in The Rolling Thunder Show and how well matched the stars of the big show are in terms of competition in the Singles Series.  There is still one Singles race left on this year's calendar and is scheduled for September 1 at the Springfield Short Track.

Thanks to AMA Pro Flat Track for doing a stellar job of getting the show in on Sunday and for again running a great event in the best racing series on wheels in the world.  Take a bow and a tip of the helmet to AMA Pro Flat Track manager Dan Johnsen, master track prep head man and former AMA Grand National Championship competitor Steve Morehead and the rest of the blue crew for again running another great program!

And of course, congratulations to 2-Time AMA Grand National Singles Champion Henry Wiles for putting on a riding school for the packed house in attendance last Sunday.  U da man!

Check out the press release below, again thanks to AMA Pro Flat Track, and then get ready for what is going to be one heckuva night of racing as the series heads to round 10 of the 2012 AMA Pro Flat Track Harley-Davidson Insurance Grand National Championship presented by Motorcycle-Superstore.com season at the Lucas Oil Indy Mile at the Indiana State Fairgrounds on Saturday, August 18.  You better hold on as this train is a rolling and it's not going to stop until the season-ending round at Pomona in October.