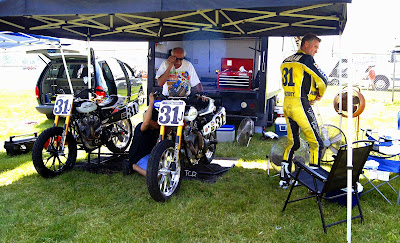 Dan Ingram suits up for the first time in 19 years as an Expert-ranked rider after returning to the track at round 4 of the 2012 AMA Pro Flat Track Harley-Davidson Insurance Grand National Championship presented by Motorcycle-Superstore.com season at the Springfield Mile I on May 27.  After being injured at Springfield in '93, Ingram mounted his comeback during the 2011 season and had earned enough points to return as an Expert rider for the spring classic at the Illinois State Fairgrounds.

Riding the #31J TCR/Zanna Racing/Indy Southside Harley-Davidson/Tucker Rocky-sponsored XR750 prepared by Tom and Nicky Cummings, Dapper Dan qualified for the National main via his semi race, and went on to finish in the 11th-place spot in his first time back to the track.

Ingram is entered for next weekend's Lucas Oil Indy Mile on the #31J Tony Dodge-built XR750, after riding for TCR at Lima (13th) and Hagerstown (DNQ). He flew out to the Sacramento Mile on July 28 to ride the Dodge XR and came home with a 14th-place finish.

There's going to be a lot of locals that will be glad to see Clermont, Indiana's finest return to Indy next Saturday, and we're one of 'em.  Go get 'em man, good luck and bring her home safe! 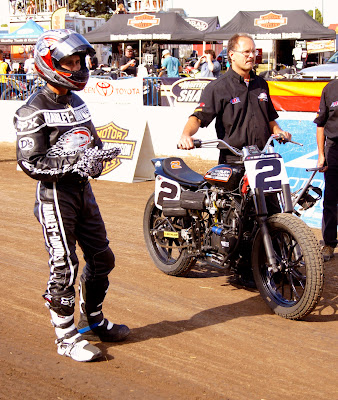 Kenny Coolbeth, Jr. waits for rider intros just prior to the running of the Springfield Mile II during round 14 of the 2011 AMA Pro Flat Track Harley-Davidson Insurance Grand National Championship presented by Motorcycle-Superstore.com season.  Coolbeth, who broke his tib & fib during round 5 at the Lima Half-Mile, is expected to return to the #2 Screamin' Eagle/Harley-Davidson Motor Co/Fox/Arai Helmets-backed factory XR750 at round 10 of the season at the Lucas Oil Indy Mile on Saturday, August 18.  The 3-Time AMA Grand National Twins Series Champion won the '09 round of the Lucas Oil Indy Mile in it's second year back at the Indiana State Fairgrounds over the Red Bull Indianapolis MotoGP Weekend.