Checa heads the testing times in Russia
Moscow Raceway (Russia), Wednesday 22 August 2012 – Carlos Checa (Althea Racing Ducati) led the way in testing for the eni FIM Superbike World Championship runners at Moscow Raceway, heading up the 21-strong group as World Superbike ventured onto the new circuit for the very first time. His final best time of 1 minute 35.891 seconds was enough to keep him ahead of Leon Haslam (BMW Motorrad Motorsport) and the charging late push of Tom Sykes (Kawasaki Racing Team). Marco Melandri (BMW Motorrad Motorsport) ran out fourth, only just ahead of the works Aprilia Racing machine of Max Biaggi.
Carlos Checa: “It is a nice adventure to be here in Russia and it’s a really nice track. In some places you can only use about 15% of throttle and just keep rolling the bike. We feel quite well today and this is a track where we have been working well in both the morning and the afternoon. We understand the line, the gearbox and the tyres. At the end we felt the tyres were working a lot better in the afternoon because probably the asphalt is less aggressive now. We are losing a lot on the straight, which is uphill, so it is not easy to manage that.” 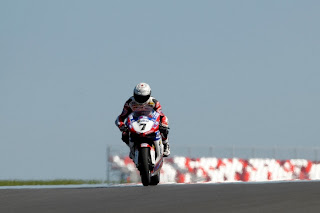 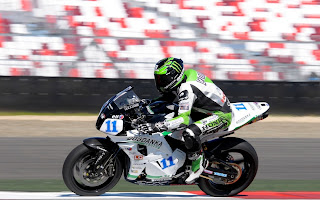