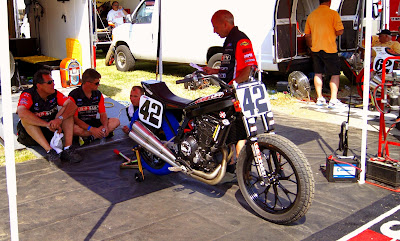 The Crosley Radio/Howerton Motorsports powered by Eaken Racing Kawasaki team rallies around the #42 Kawasaki 650R-based mount of rider Bryan Smith at round 4 of the 2012 AMA Pro Flat Track Harley-Davidson Insurance Grand National Championship presented by Motorcycle-Superstore.com season at the Springfield Mile I on May 27.  Smith took the newly-minted machine to a 3rd-place finish in the 25-lap National main after earlier in the day winning his heat and the Dash for Cash event, all in the team's very first gathering on the track for the 2012 season.  Jeff Gordon, Ricky Howerton, Bryan Smith and Barry Smith take their final breathers before the action starts to rip with The Rolling Thunder Show's annual spring stop at the famed mile oval at the Illinois State Fairgrounds.

As was originally announced back in April, Flyin' Bryan got together with team owner/builder/designer/guru Ricky Howerton after the owner of Howerton Products reached out to the Michigan-based rider about contesting his design at the five Twins Series mile events of the 2012 season.  The resulting answer was a big 'yes' and the end results were pretty amazing right off the start, and then the team went out and won round 7 of the season at the Sacramento Mile, which again was just the team's second outing together.  To you see the pattern developing here?

With the hometown round of the series coming to the Indiana State Fairgrounds mile oval this coming Saturday, August 18, you can bet that owner Howerton and best friend and head-stooge Jeff Gordon have been burning the midnight oil fine-tuning what will now be the third configuration of the machine in what will now be their third outing at the fast and furious Lucas Oil Indy Mile.

I had the pleasure of visiting with the Indy west siders this last Saturday at Howerton's shop on Gasoline Alley, just a handful of blocks south of the Indianapolis Motor Speedway.  Both Rick and Jeff were hard at it putting the final touches on what will be the third variation of the machine since it hit the track at Springfield back in late May.  Some of the changes are and may seem miniscule, but builder Howerton isn't cutting any corners nor taking any chances to ensure that by the end of the day on Saturday, they achieve the end result--standing on the podium at one of AMA Pro Flat Track best-attended events over the course of the 5th Annual Red Bull MotoGP Weekend.

So if you are wanting a good bet, the Bryan Smith-manned #42 Crosley Radio/Howerton Motorsports powered by Eaken Racing Kawasaki team would be a pretty good one for this Saturday night on the eve of the last day of the Indiana State Fair, with the lighted ferris wheel spinning a glow over the action on the track as the stars of The Rolling Thunder Show take the greatest racing series on wheels in the world to the mile oval to show the town's world attendees that this is the real deal in motorcycle racing.

And make sure you take a walk down into the pit area during the fan walk late Saturday afternoon between the break in qualifying and the heat races and take the time to take in this fine piece of machinery and say 'hi' to the team.  Between Bryan, Barry, Rick and Jeff these guys like to have a great time and enjoy the racing and the crowd and would love to have you come by and admire their piece of art.  And tell them Stu's Shots sent you!

As always the best of luck to the Howerton team and the rest of the field for this Saturday's running of round 10 of the 2012 AMA Pro Flat Track Harley-Davidson Insurance Grand National Championship presented by Motorcycle-Superstore.com season at the Lucas Oil Indy Mile.