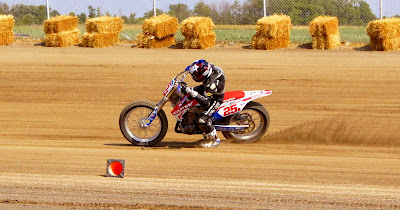 Shayna Texter on her #25A DFW Honda/RLT Racing/McElroy Packaging/Herr's-sponsored Honda CRF450R puts it through the motions while qualifying for round 5 of the 2012 AMA Pro Flat Track Motorcycle-Superstore.com Pro Singles Championship season at the Lima Half-Mile on June 30.  The Pennsylvania resident won her second Pro Singles National main event last Saturday at the Sacramento Mile after battlling with Stephen Vanderkuur and Jake Shoemaker throughout the 12-lap main, pulling off her first win since her breakout win at the Knoxville Half-Mile during the 2011 season.