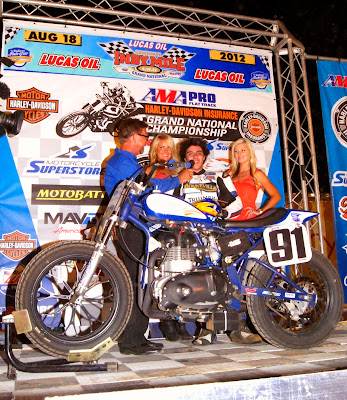 Round 10 of the 2012 AMA Pro Flat Track Harley-Davidson Insurance Grand National Championship presented by Motorcycle-Superstore.com season saw the series hit the infamous Lucas Oil Indy Mile and along the way a fresh, new face made it onto the podium after winning semi race #2 on the evening.

2011 AMA Pro Motorcycle-Superstore.com Pro Singles Champion Mikey Martin was rewarded for his winning efforts in the Pro Singles Series after the end of the '11 season with an offer to ride the work-in-progress Triumph 955-based mount for the Bonneville Performance Triumph AMA Pro Flat Track Grand National Twins Series team.  After parting ways with second-year rider Shawn Baer, Martin was enlisted to help the team get to the next step in the ultra-competitive Rolling Thunder Show.

With a rough start to the first three events of the 2012 Twins Series Championship at the Springfield Mile I, Lima Half-Mile and Hagerstown Half-Mile, the team headed to round 7 of the season at the Sacramento Mile where Martin and team celebrated a solid and hard-earned 9th-place finish in the National main, Martin's first top-10 as an Expert-ranked rider for the '12 season.

When the Twins Series reconvened at round 10 of the season at the Lucas Oil Indy Mile on August 18, Martin and the team had made some major strides when the day was over.  Winning semi #2 at Indy made for Martin's first podium appearance as and Expert rider and showed the packed house on-hand that he and the Triumph factory-backed team were indeed making steps to move forward and upward in the run at the front in the greatest racing series on wheels in the world.

Although their night ended early with a broken chain and a resulting 17th-place finish at Indy, Martin and the team have a lot to look forward to with the remaining five events on the schedule for the Twins Series this season and look to be in the mix as the series winds down over the course of the next two months.

You can read Mikey's full report below and a big congrats to him and the team for making the next big leap in the Rolling Thunder Show.  Great job!

Here is my race report from last weekend at the world famous Indy Mile, in Indianapolis, Indiana.  Since it was during the Indiana State Fair there were a lot of people and the stands were packed full.   I was very excited coming into this race because I felt good physically and mentally and had a lot of confidence from the previous race at the Sacramento Mile where I got a ninth place finish.

After winning semi #2 at the Lucas Oil Indy Mile on August 18, Mikey Martin #91 celebrates on the podium alongside his Bonneville Performance Triumph while AMA Pro Flat Track announcer Barry Boone talks to the crowd about Martin's great win in front of the packed house at the Indiana State Fairgrounds.  Photo by Dave Hoenig/Flat Trak Fotos.com courtesy of Mikey Martin & the Bonneville Performance Triumph team.
The Triumph worked great in practice and the first qualifying session went great too, I qualified fifth.  Before the second qualifying session we made some adjustments to my bike to see if we could get the setup even better, but the track started getting dried off and slippery, and I ended up qualifying tenth overall.


In the heat race I qualified on the front row, I got a great start.  I was in third for a lap then I slipped off the groove and fell back to eleventh place, I made a pass every lap and ended up fifth, one spot out of a direct transfer to the main, which meant I had to go to a semi. 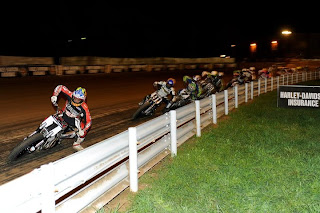 Jake Johnson leads the National main on his #1 Zanotti Racing XR750 with Mikey Martin #91 on the Bonneville Performance Triumph slotting in behind early in the 25-lap race at the Lucas Oil Indy Mile on August 18.  Photo by Michael Boston courtesy of Mikey Martin & the Bonneville Performance Triumph team.
In my semi I got the hole-shot and led every lap.  I was battling with Willy McCoy the whole race and drafted him for the semi win.  This was my first time on the podium with the Triumph.

In the main I got a great start from the back row, I was in second for a few laps behind Jake Johnson, when I got bumped off the groove and fell back to eighth.   I was passing a few riders down the back straight away on lap four and then my chain broke exiting turn four.  I knew where everyone was at, so I was able to go high and allow everyone to pass before I crossed back down to the inside of the track and into the pits without causing a red flag restart.

Obviously I was saddened because I felt that I was going to better my previous ninth place.

Come by the pits and say hi.
The next race is the Springfield Short Track September 1st and the Mile on the 2nd, at the Illinois State Fairgrounds in Springfield, Illinois.

Thanks to our great sponsors: