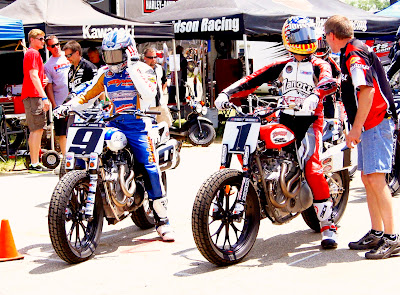 The two current championship points leaders in the 2012 AMA Pro Flat Track Harley-Davidson Insurance Grand National Championship presented by Motorcycle-Superstore.com season get ready to roll out for the final qualifying session at round 4 of the season at the Springfield Mile I on May 27.

Jared Mees on the #9 Rogers Racing/Blue Springs H-D/Saddlemen/National Cycle-sponsored XR750 leads the standings by 11 points (141-130) over 2-Time and defending AMA Grand National Champion Jake Johnson on the #1 Zanotti Racing/Schaeffer's H-D/Boughner Racing/Arai-backed XR750 after the completion of round 7 of the series last Saturday at the Sacramento Mile, where Johnson came home in 2nd to event winner Bryan Smith on the #42 Crosley Radio/Howerton Motorsports powered by Eaken Racing Kawasaki in another classic battle in The Rolling Thunder Show.  Mees finished a very close third to the duo after running in the lead pack throughout the evening at the Cal Expo Fairgrounds in California.

With the series headed to the Castle Rock TT event this Saturday, August 4, the duo will take the fight back to the North West Territory in one of the series' most heralded venues held in Washington State.  In the last TT event of the season at Springfield on May 26, the pair also finished 2-3 to winner Henry Wiles on the #17 Don's Kawasaki.

You can check out the press release below that includes some nice video and photos, posted by AMA Pro Flat Track, to catch up with the action from the first of two rounds on the west coast.