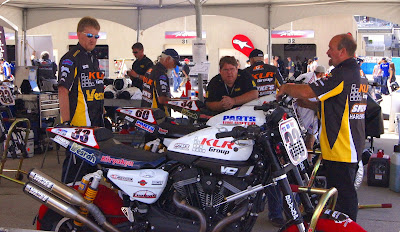 The KLR Group team works on the AMA Pro Vance & Hines XR1200 Series machines of Kyle Wyman's #33 and Michael Beck's #60 (with Michael Barnes' #34 sitting in the background) during the 5th Annual Red Bull Indianapolis MotoGP Weekend on Friday, August 17, 2012 at the Indianapolis Motor Speedway.  Wyman scored a 1-2 over the weekend on the KLR Group/Spyke's H-D/Vesrah/GK Motorsports-backed mount, while Beck took home finishes of 7-20 on the Parts Unlimited/Kyle Wyman Racing/Spyke's/Cortech-backed XR1200.  Barnes ended the weekend with finishes of 4-5 on his like-sponsored mount to Wyman's.

AMA Pro Road Racing announced over the weekend the extension of the series through the 2014 season as an addition to the AMA Superbike, Daytona SportBike and SuperSport Series classes with V&H owner Terry Vance noting that the series will carry the rebranded name of the AMA Pro Vance & Hines Harley-Davidson Series beginning with the first round at Daytona in the 2013 season.  Vance & Hines will also continue to offer the special $3500 race kits for the Milwaukee-bred V-twins.

This is great news for the series which has displayed some close racing throughout it's three years of existence (2010 saw five events on the calendar with the 2011-2012 seasons following the full season schedule.)  You can read the full press release below thanks to AMA Pro Road Racing.

INDIANAPOLIS, Ind. (August 18, 2012) - With over thirty riders lining up on the grid this weekend to mark the start of the XR Showdown at the Red Bull Indianapolis GP, Vance & Hines, the Harley-Davidson Motor Company and AMA Pro Racing are pleased to announce that the Harley-Davidson spec racing class will be extended for the 2013 and 2014 seasons in the GEICO Motorcycle AMA Pro Road Racing Championship.

Travis Wyman on the #24 Harv's H-D-sponsored XR1200 leads this pack of riders during one of the AMA Pro Vance & Hines XR1200 Series races during the 2012 season.  AMA Pro Racing announced over the weekend that the series would be extended on the schedule through the 2014 season.  AMA Pro Road Racing photo by Brian J. Nelson.

"We are absolutely thrilled to be making this announcement here at Indy, in front of the world's racing audience at the most historic racing circuit in the world, showcasing and promoting Harley-Davidson, the most iconic American brand in motorcycling," said Terry Vance on news of the series' extension. "The fans have responded with tons of enthusiasm for the Harleys, and we are committed to its continued growth, further expanding the grids and raising the level of exposure for the class."

In only its second full season, the XR1200 Series has produced fierce battles and some of the closest finishes in AMA Pro Racing, and with over $200,000 in prize money to be awarded for the 2012 season, the class offers a purse that now rivals all the other classes in the AMA Pro Paddock.

This weekend's round features an expanded $50,000 purse and also signals the start of the XR Showdown, where the top ten riders in the points standings will compete for the title over the final five races of the season and an extra $60,000.

For more information on the series, please contact Paul Langley at
plangley@vanceandhines.com or visit vanceandhines.com/xr1200 for an electronic version of this announcement.