PICKERINGTON, Ohio -- August 3, 2012 -- The AMA Motorcycle Hall of Fame is pleased to announce the fifth member of the induction class of 2012. The late Al Wilcox, a former motorcycle racer who went on to be a race starter for decades, will be inducted into the Hall of Fame as part of the 2012 AMA Legends Weekend at the Red Rock Resort in Las Vegas, Nev., Nov. 16-17.

"Al Wilcox was a fixture at motorcycle races as a starter for more than five decades and a true ambassador for the sport," said Jeffrey V. Heininger, chairman of board of the American Motorcycle Heritage Foundation, which oversees the Hall of Fame. "He was well respected, well liked and dedicated his life to racing. He is certainly missed."


Born in Trenton, N.J., in 1919, Wilcox began riding motorcycles in 1936 and, following military service during World War II, began racing in 1947. His race career spanned 19 years -- from 1947 to 1966 -- and he held national No. 49. In addition to being a successful speedway racer for four years, Wilcox also finished well in TT, dirt-track and hare scrambles races over the course of his long career.

Wilcox began flagging races in 1959, increasing his duties after ending his racing career in 1966. He went on to flag the famed Daytona 200 motorcycle race for many years with AMA Motorcycle Hall of Fame flagger Duke Pennell, and also performed flagging duties for WERA roadraces for decades. 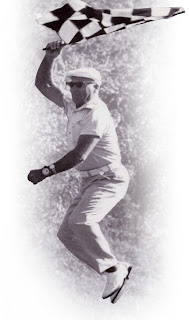 'Airborne' Al Wilcox is shown in a promotional photo courtesy of the American Motorcyclist Association's Hall of Fame.

Wilcox became known as "Airborne Al" because of his unique flagging style that involved jumping up in the air at the end of a race during his 50-plus years of flagging.

"I think it's great! I really do," said Joyce Markulec, Wicox' daughter. "I just wish my dad was alive to see it. He would be on cloud 49. It was his true love, besides my mother. He had 70 years of involvement with motorcycles, riding, racing and flagging. My father was a true legend, not only with the motorcycling community but with his family as well. Rest in peace, dad."

The class of 2012 will officially be inducted into the AMA Motorcycle Hall of Fame on Nov. 16 as part of the AMA Legends Weekend. The weekend also includes the 2012 AMA Motorcycle Hall of Fame Dave Mungenast Memorial Concours d'Elegance on Saturday, Nov. 17, featuring many of the country's most impressive original and restored classic motorcycles.

Tickets for the AMA Legends Weekend are now available through this online registration form: http://events.r20.constantcontact.com/register/event?oeidk=a07e5r7zy8ea4316694&llr=vw9ldxbab or by calling (800) 342-5464.

The AMA Legends Weekend will be held at the Las Vegas Red Rock Resort, a world-class spa, hotel and casino, featuring a range of entertainment, dining and family-friendly attractions. The facility's expansive ballrooms provide a stunning backdrop for the AMA Legends Weekend. Room reservations are available now at a special group rate by calling (866) 767-7773 and referencing group code RCIAME or AMERICAN MOTORCYCLIST. Online room reservations are available at www.redrocklasvegas.com.

More information about the AMA Motorcycle Hall of Fame can be found at www.motorcyclemuseum.org.

More information can be found at www.motorcyclemuseum.org