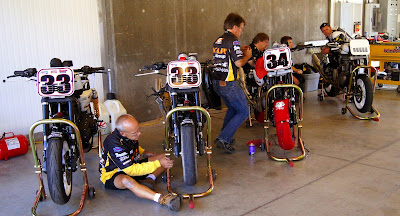 Kyle Wyman #33 and Michael Barnes #34 talk with the KLR Group team, while the finishing touches are put on their KLR Group/Spyke's H-D/Vesrah/GK Motorsports-sponsored XR1200s prior to the afternoon practice session at the Indianapolis Motor Speedway on August 11, 2012.

Wyman was declared the winner in the race one event yesterday during the Red Bull Indianapolis MotoGP undercard race after early declared winner PJ Jacobson was determined to have caused the red flag that ultimately shortened the 10-lap race to 5 laps due to the six rider crash at the Indianapolis Motor Speedway.  Barnes finished 4th after the results were determined.

With the points having been reset in the AMA Pro Vance & Hines XR1200 Series prior to the Indy round Wyman takes over the points lead now with his win and team mate Barnes sits in the 4th-place spot.

INDIANAPOLIS, Ind. (August 18, 2012) - Kyle Wyman was declared the winner of the AMA Pro Vance & Hines XR1200 Series race at Indianapolis Motor Speedway on Saturday. The race was red flagged working lap six, with many of the front-runners, including race leader P.J. Jacobsen, of the MOB Racing/K Tech/Orient Express/Moroney's team, collected in a pile-up caused by fluids on the track. Wyman, who ran second at the time on his KLR Group/Spyke's Harley-Davidson/Vesrah Racing XR1200, also crashed.

Jacobsen was declared the race winner provisionally, but due to an extensive investigation that followed the race which involved the examination of all bikes as well as the race surface, plus reviewing hi- and lo-res video and high definition photographs of the incident, AMA Pro officials determined that Jacobsen's bike was the cause of the red flag and he was therefore moved to the tail-end of the lead lap in the results. 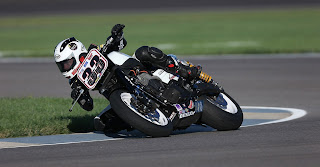 
Supermoto ace Benny Carlson (Suburban Harley-Davidson) was second, earning his first class podium. Michael Corbino (XP Motorsports) earned third place in the race. Corbino's podium was greatly aided by a miraculous save he made on lap two of the race.

Jacobsen led much of the 10-lap race, shorted to five complete laps after the red flag.

The race began with Jacobsen getting the holeshot, but he ran wide in turn two, and Tyler O'Hara (JCR/Srubblade/Bartel's Harley-Davidson) was able to move past. Last year's race winner O'Hara quickly earned a 1.133-second lead on the first lap over Jacobsen, with Wyman and Corbino following. O'Hara made his bid to escape but Jacobsen began to reel him back in on lap two after getting a better feel from his Dunlop tires. The New Yorker cut the lead to 0.7 the following lap, then made a pass for the front as lap four began.

O'Hara was not to be denied and refused to give in, retaking the lead in the latter part of the lap with a strong outbraking maneuver. To begin lap five, Jacobsen drafted past down the straight and then turned a strong lap as his confidence rose. O'Hara lowsided in the final section of the track trying to keep up, remounting and immediately rejoining the fray.

For a time, it appeared that Jacobsen had the race in hand at the halfway point of the ten-lap race. He had a lead of four seconds when disaster struck. Jacobsen crashed, and in short order, he was joined on the ground by Wyman, Michael Barnes, David Estok and O'Hara.

Wyman now holds an early edge over season-long rivals Barnes and O'Hara in the XR Showdown, which will determine the class championship and pay out over $60,000 to the riders. Barnes was classified fifth and O'Hara 13th.

Wyman's bike took the worst of the carnage as it was struck by another crashed machine while on its side in the middle of the track. The New Yorker was worried the race would be restarted.  "Tyler went down three or four laps in, and I was thinking I was in a pretty good position. P.J.'s not in the chase, and I had a gap back to third, so I figured we'd start settling in," said Wyman. "But I looked up in Turn 10 and saw P.J. on the ground ahead of me and before I knew it, I was on the ground too. It's not the way you want to end the race, but I can't say enough about my KLR Group Harley -- it was working great. We've had a little bit of a struggle trying to find the chassis set-up with the tire change last weekend. We're making progress, and I'm glad to get a result."

Carlson's return to racing after a few years away has gotten stronger as the season has gone on, with the former Supermoto champion gaining more confidence each time out as he qualified for the Showdown.  "I rode pretty tight in the beginning. I feel like I had the speed to run up front but, every single race, it seems like I ride a little bit tight," said Carlson. "Once we got out of that, I got drafted by Barnes and just kind of got held back from the leaders on the first and second lap. I feel like I have the pace. The race went pretty good -- I just kept it on two wheels and, all of a sudden, everything cut loose, and there were guys laying on the track. It's a good result. It's a little bittersweet, but I'll take it for sure, especially for the title chase and all that stuff. Hopefully we can move that momentum to tomorrow."

Between the races, stay connected with GEICO Motorcycle AMA Pro Road Racing at www.twitter.com/AMAProSBK and www.facebook.com/AMAProRoadRacing.