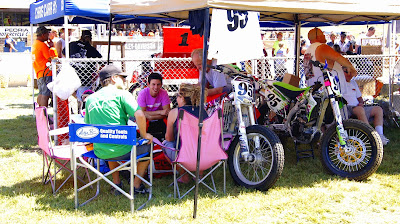 Round 14 of the 2011 AMA Pro Flat Track Harley-Davidson Insurance Grand National Championship presented by Motorcycle-Superstore.com season at the legendary Peoria TT saw JD Beach #95 taking a break from his usual duties of running in the AMA Superbike Championship Series for the Attack Kawasaki team and putting his time in campaigning the Singles Series event at the beautiful Peoria Motorcycle Club's facilities.  Beach would qualify for the National main via a 3rd-place finish in his heat behind winner Jared Mees and runner-up Sammy Halbert, and eventually end the day in the 13th-place spot.

The Washington State born racer, shown above with his family and crew of the Universal City Kawasaki Motorsports/Morlandt Electric/Alpinestars/Arai-sponsored team, will be on-hand tonight as the stars of The Rolling Thunder Show head to the Castle Rock TT, where Beach will be the 'test rider' for what AMA Pro Flat Track announced late yesterday will offer a 'live video stream' from the infamous North West Territory event.

In what will surely be a ground-breaking addition to the series, AMA Pro Flat Track will be picking up this new service for fans to follow online after it has been tested earlier in the season in some of the AMA Pro Road Racing events.

To give fans the availability to view online streaming from an event is a big step-up for the great crew of The Rolling Thunder Show, and will give everyone another option to follow the races along with their already excellent Live Timing and Scoring.

Add this to the great coverage at the track from Miriam Deitcher and her super Flat Track Live @ Facebook and fans should be in seventh heaven being able to keep up with at the track action!

You can read the full press release below thanks to AMA Pro Flat Track and see what options you will have in order to keep up with the on-track video at today's event at Castle Rock, WA.

This is without a doubt one of the best things that could be done for fans in today's digital age, and will surely be considered a massive step forward in the days, months and years to come for the greatest racing series on wheels in the world.

A BIG thanks and a tip of the helmet to AMA Pro Flat Track for stepping up to the plate with this great way to follow the races, thanks guys!

JD Beach on the #95C Red Bull/Top 1 Oil/Rockwall Performance/Alpinestars-sponsored Honda CRF450R is shown in route to winning the Peoria TT round of the 2010 AMA Pro Motorcycle-Superstore.com Pro Singles Championship season in August '10.  Beach would go on to win his fourth overall National main event of the 2010 season in the Pro Singles Championship Series at the next event at the Lucas Oil Indy Mile.  He would then step-up to the Expert ranks over the Labor Day Weekend classic at the Springfield Short Track, where he would finish in the 3rd-place spot in his debut behind winner Henry Wiles and runner-up Jake Johnson.  AMA Pro Flat Track photo by Dave Hoenig/Flat Trak Fotos.com, the official photographer for The Rolling Thunder Show


Three channels will be available throughout the day on Saturday, August 4. The first camera will be located on top of the press box and will give a bird's eye view of the live action and PA feed as the race unfolds. The second camera will be mounted under the tent of AMA Pro star J.D. Beach's team, giving fans a perspective of the intensity and tenacity that it takes to run a successful race. The third camera is still in development, but fans will likely have the opportunity to watch the race unfold from an onboard camera mounted on the back of talented J.D. Beach's Kawasaki.


Another way to keep the fans up to date, users can click on the Twitter tab to display the AMA Pro Live Twitter feed (@AMAProLive). Social media, live timing and the all-new streaming video system will be available throughout the duration of the event, including everything from heat one to the final Main Events for the veterans of AMA Pro Harley-Davidson Insurance Grand National Championship presented by Lucas Oil and Motorcycle-Superstore.com and the rising stars of the AMA Pro Motorcycle-Superstore.com Pro Singles division.