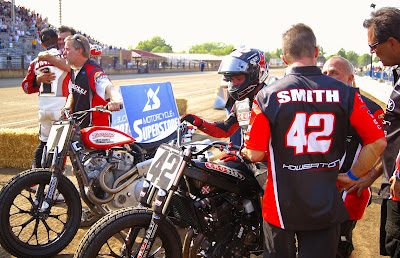 The first Twins Series event of the season just over two months ago saw the Howerton/Eaken parallel twin emerge as one of the significant new players in town by immediately making an impact on the field and the series.  While winning his heat race and the Dash for Cash event at Springfield, and just coming up short of the win with a 3rd-place finish in the main, Smith and the team immediately were regarded as 'the one's to beat' at the remaining four mile events of the 2012 season.  And when Sacramento rolled around last weekend, they had stepped-up their game and made some improvements to allow Flyin' Bryan to take his first win (in only their second race together as a team) ahead of Johnson and series points leader Jared Mees on the #9 Rogers Racing XR.

Smith, who had previously won the Sacto Mile last year and in the '03 season (during the now-defunct Formula USA Series), won practice and then went out and qualified 9th-fastest, but less then .4 seconds behind fast-qualifier Jersey Jake.  Winning his heat to qualify for the National main and coming home in 3rd-place in the Dash for Cash, the only thing left was the 25-lap big show.

Needless to say Smith, Johnson, Mees, Sammy Halbert and Brandon Robinson put on one heckuva show at Sacramento last Saturday night as they battled throughout the event's just over 16 minutes.  But in the end, Smith had more then come to terms with the characteristics of the Kawi rocket and showed that the 750cc powerplant was more then capable against the all-mighty and long-conquering XRs and had plenty of power to make for some serious closing rates along the straights at the Cal Expo Fairgrounds.

In the end, the gap to runner-up Johnson only shows .038 seconds on the official results tab, but make no mistake about who had 'em covered with Smith leading 23 laps at the line and Johnson following through with the other two crosses of the stripe.  A new sherriff is surely in town in The Rolling Thunder Show, and with three more mile events on the season's schedule the rest of the teams and riders have got to be thankful there aren't any more for this season.

What should be very interesting when everything comes out in the wash at round 10 at the Lucas Oil Indy Mile on August 18 is when Johnny Lewis on the #10 Scott Powersports Kawasaki returns to the track and Brandon Robinson gets another shot on the #44 Werner-Springsteen Kawasaki after his best-ever result of 4th-place at Sacto.  Add in Slammin' Sammy on his always-potent #7 South East H-D XR, Henry Wiles on the #17 Lloyd Brothers Motorsports Ducati, Willie McCoy returning to action on his #59 Harley-Davidson of Wausau and the rest of the greats in The Rolling Thunder Show and that should make for some seriously excellent racing at the Indiana State Fairgrounds during the Red Bull Indianapolis MotoGP Weekend, in front of what should be a packed house.  That is one race you DON'T want to miss!

A big congratulations, again, to the Crosley/Howerton/Smith team for their breakout win last weekend, and a big tip of the hat to Mees and Johnson, your current points leaders, for their excellent runs as well!

With the series rolling into the Castle Rock TT tomorrow night, the Singles Series will take over for the next two events.  The Peoria TT is set for Sunday, August 12 and then the greatest racing show on wheels in the world heads to the Lucas Oil Indy Mile for the next Twins Series event of the 2012 AMA Pro Flat Track Harley-Davidson Insurance Grand National Championship presented by Motorcycle-Superstore.com season.  And this train is moving on and it's moving on fast!

Round 7 Sacramento Mile links of interest (story of the race, videos and complete results):


Thanks to Dave Hoenig and Cycle News for the (as always) excellent coverage of last weekend's round 7 of the 2012 AMA Pro Flat Track Harley-Davidson Insurance Grand National Championship presented by Motorcycle-Superstore.com season at the Sacramento Mile:

Dave also has a very nice selection of pics from the Sacto Mile on his great site Flat Trak Fotos.com.  A big thanks to Dave for all of his efforts in always getting THE great shots!

AMA Pro Flat Track posted the following videos from the Sacto Mile (another big thanks to AMA Pro Flat Track and the great duo of Yve Assad and Will Fulford for their undying efforts in the production of these (and ALL of their) videos.

Jared Mees #9 Rogers Racing/Blue Springs H-D XR750 3rd-place interview (which has some excellent footage on the back straight at Sacramento that shows the closing rate of the Kawi on the #1 & #9 XRs):

And again, thanks to AMA Pro Flat Track for the complete results from the Sacramento Mile: