Mid-America Speedway in Indy Announces 'Night Before the Indy Mile' for August 17, 2012

One of the hidden jewels in flat tracks in the Midwest is Mid-America Speedway on Indianapolis' south east side, located at the Marion County Fairgrounds.  Having hosted flat track and speedway racing since the 2007 season, the track has started to grow a big following amongst fans and riders alike over the course of the last few seasons.

Run by fellow flat track fanatic Jim Terchila, the track hosts 8-10 events a year ranging from the youngsters all the way to the Pros in a variety of classes and displacements on the immaculately prepared short track.  During regional and local races on the track's schedules, rider turn-outs of 140-150 with 27-30 races is commonplace.

The racing lines around Mid-America are abundant, too, as evidenced in the shot above taken during the June 23, 2012 event.  Ben Knight #85P leads Jake Tolbert #90J, Brett Terchila #9 (the track president's younger brother), and Ricky Leak #96J.  All are area and/or local riders that regularly contest the events held at the Marion County Fairgrounds track.  Track president Jim Terchila himself regularly runs the speedway class himself and is quite the hot shoe on his brakeless 500cc methanol-burning machine.

Last year on the Friday night of the Red Bull Indianapolis MotoGP Weekend the track held it's first 'Night Before the Indy Mile' event that was one of the facility's best-attended rounds of the season, and hosted AMA Pro Flat Track riders such as Jared Mees (who won last year's Pro 450 main and is expected back again this year), Henry Wiles, Ion Stear and Rob Pearson, among a big list of other notable Pros.

Next Friday, August 17 will be the track's official 'Night Before the Indy Mile' after last season's Lucas Oil Indy Mile was canceled due to the tragic events surrounding the rigging collapse on stage during the Sugarland concert held just two weeks before the event had originally been scheduled.  Mid-America will again be running a limited program for the evening, and the list of regulars/locals and Pro riders is growing fast.  And the track again will also host the 1949 Indian Arrow 250cc Challenge that drew a nostalgic following for the vintage event's first run.

This will be an event that is a must see for any flat track fan and/or any racing fan in Indy over the big weekend of racing in the Hoosier Capital.  Check out the full press release below and get ready to head east after the first day of practice wraps at the Indianapolis Motor Speedway to check out some of the best of the best on the great little short track at Mid-America Speedway.  You won't be disappointed!

Mid-America Speedway in Indianapolis Brings You the '2012 Night Before the Indy Mile' presented by Harley-Davidson of Bloomington, IN. on MotoGP Weekend Friday, August 17

Mid-America Speedway, Indianapolis, IN.--August 10, 2012—In just one week, one of the biggest weekends of a motorcycle racing fan's dream will all come together in the Indiana capital as the Red Bull Indianapolis MotoGP will reign supreme for it's 5th Annual gathering at the Indianapolis Motor Speedway.


There are many events that help to highlight the great weekend of racing in Indy, but one of the most exciting will be happening on Friday, August 17 as Mid-America Speedway , located at the Marion County Fairgrounds, will be hosting their inaugural 'Night Before the Indy Mile' on the beautifully prepared short track venue located on Indianapolis' south east side of town.


Hosting flat track racing at it's facility since the 2007 season, the local venue will host the stars of AMA Pro Flat Track and some of the riders on the regional and local circuit for what is sure to be a great kick-off to the following night's Lucas Oil Indy Mile held at the Indiana State Fairgrounds. For the second year in-a-row, Mid-America will again play host to some of the best racing on wheels in the world as some of the stars of The Rolling Thunder Show in AMA Pro Flat Track will roll into town the night before to contest the Pro 450 Class.


As most remember from the 2011 season, the originally-scheduled round of the Lucas Oil Indy Mile was canceled due to the tragic results of the rigging collapse on the main stage just over two weeks before the event was to run. Mid-America Speedway hosted it's original outing on Friday night of the '11 MotoGP Weekend and saw a great turn-out of Pro and local talent in spite of the cancellation at the Indiana State Fairgrounds, and is expecting an even better turn-out of talent for this year's event on Friday, August 17. 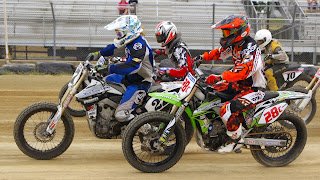 Along with the big names, local favorites such as Dreyer Motorsports/Tucker Rocky-backed Ricky Leak, Nathan and Kevin Wilson and Ken Maynard are also expected to be racing at Mid-America, and Clermont, Indiana's Dan Ingram #31J will also be on-hand. For those of you unfamiliar with Dan, he just returned to the Expert ranks in AMA Flat Track at the ripe young age of 47 years old after being injured and forced to retire prematurely during the '93 racing season. Ingram will be on-hand to sign autographs for the fans and will be selling t-shirts to help support his Expert Twins Series program. All riders will be available throughout the evening to sign autographs and talk with the fans.

Harley-Davidson of Bloomington, Indiana is the presenting sponsor for
the 2012 Night Before the Indy Mile at Mid-America Speedway
on Friday, August 17 at the
Marion County Fairgrounds, 7300 East Troy Ave., Indianapolis, IN. 46239


For the second year in-a-row, we will also be showcasing the by-invitation only Bob Starke Indian Arrow Challenge, which features a fine collection of 1949 Indian Arrows. Texan 'Wild Will' Kelley, a former AMA Pro Flat Track competitor and 6-Time VDTRA Pro #1 competitor will be making the swing into Indy after competing in the Kansas Fair races to ride one of these immaculate machines.

For more information, be sure to visit our website at www.midamspeedway.com and make your plans now for what will truly be a great night of short track racing at Mid-America Speedway, the 2012 'Night Before the Indy Mile' at the Marion County Fairgrounds on Indy's south east side.