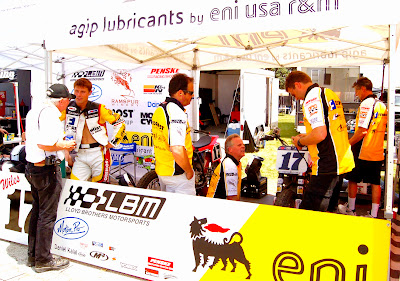 In the shot above, rider Henry Wiles can be seen relaxing and talking with someone in the LBM pit area while Lyle Pizzino (frame fabricator/VMC Racing Frames), crew chief Dave Gamble, team co-owners Dave (foreground right) and Mike Lloyd (background right) go about their respective duties to get their bikes ready to roll for the first Twins Series event of the season.

One of the hardest working and most dedicated teams in The Rolling Thunder Show, the Columbus, OH.-based team has again taken on the task of selling raffle tickets for the 2012 season that in the end will support the Air Fence Fund for AMA Pro Flat Track, the best safety and innovative support system available to keep major injuries at a minimum in the greatest racing series on wheels in the world.

This year's prize will again be another one of AMA Pro Road Racing's pace motorcycles from the 2009 season, a 2009 Buell XB12XP.  Last year's benefit collected $11.5K that was donated to the worthiest safety cause in racing in order to transport, repair, replace and erect air fence at each and every AMA Pro Flat Track event in the country.

There are several benefits to this raffle, but the most important one is obviously rider safety in the great world of AMA Grand National Championship racing.  One of the others is you get to get up close to one of the most sano and most professionally managed teams in any sport, and meet and talk with some of the great guys on the LBM team.  Their enthusiasm and efforts put forth in this great sport of ours is always evident on or off the track, and they are some of the nicest guys around to talk to about the sport and their team's operations.

So either way you go, you get to hang out and meet some great people and racers, and most importantly you can also get involved directly with THE best way to help support the safety of the riders and the sport, the Air Fence Fund.  You can't go wrong!

Your next chance to hook up with these guys in the 2012 AMA Pro Flat Track Harley-Davidson Insurance Grand National Championship presented by Motorcycle-Superstore.com season will be at round 10 at the Lucas Oil Indy Mile, the next Twins Series event on the schedule, set for Saturday, August 18 over the Red Bull Indianapolis MotoGP Weekend.  Indy is set to be a big weekend all-around, but you don't want to miss the return of the Indy Mile to the Indiana State Fair at 1201 E. 38th Street.  The place will be rockin'!  And your next chance after Indy will be the Springfield Mile II over the Labor Day Weekend on Sunday, September 2.

So get your tickets now and help a very worthy cause, it may save another rider from serious injury, or worse! 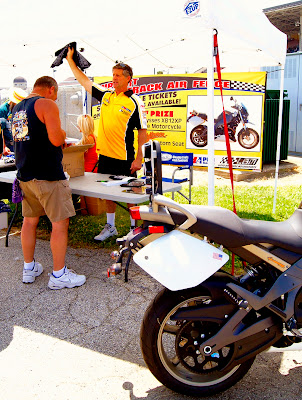 Lloyd Brothers Motorsports co-owner Mike Lloyd works on hawking some more tickets for the 2012 Air Fence Fund Buell Raffle at the Illinois State Fairgrounds running of the Springfield Mile I on May 27.  With the grand prize sitting in the foreground, Mike works his heart out to sell some tickets for what is the best safety improvement in AMA Pro Flat Track and is also one of the best ways that fans can get involved to help support the sport and keep the riders safe.

For $20/ticket, you get a great chance at the '09 Buell XB12XP that was used by AMA Pro Road Racing during the 2009 season as the series' pace bike, and you get to get directly involved in a cause that is the most worthy way of giving back to and supporting the sport and the safety of the riders in The Rolling Thunder Show.


In 2012, Lloyd Brothers Motorsports with AMA Pro Racing, Saddlemen and Foremost Insurance is raising money to add new and repair existing air fence for the racers.  The grand prize in the raffle is the final 2009 Buell Ulysses XB12XP that was used as the official Pace Motorcycle during the 2009 AMA Pro Road Racing season.  The Buell, which has less than 500 original miles, was donated by AMA Pro Racing.

Second place prize is a custom seat of your choice from Saddlemen. There will also be a special prize for the purchaser of the most tickets.  Artist Army Armstrong will paint a custom painting of the favorite racer of the person that purchases the most tickets!


To date we have only been able to sell 149 of a total of 1,000 available tickets at the races.  So far there are pretty good odds on this bet!

Unfortunately, it has been difficult for us to canvas the paddock and stands while at the same time focusing on the race day.  To help make it easier for you to enter, we have set up a donate button for PayPal or Credit Card on a special web page for the raffle:

For every donation, we will fill out a ticket for you and send you an email with the ticket number that is entered on your behalf.  Your name will also be added to the list of ticket holders at: http://www.lloydbrothersmotorsports.net/tickets.htm

Please consider supporting this great cause to keep our racers safer.

If anyone saw the big crash at Springfield this spring, you know that the air fence really works and saved 4 of the top flat track racers in the world from serious injury.


Thanks again for your support.

Here's the original press release from the Lloyd Brothers Motorsports team and AMA Pro Flat Track from May 2012:

DAYTONA BEACH, Fla. (May 17, 2012) - Lloyd Brothers Motorsports, Inc. with support from Foremost Insurance Company, Saddlemen and AMA Pro Racing is pleased to announce participation in an exciting fundraiser for the Roadracing World Action Fund. Throughout the 2012 AMA Pro Flat Track season, the Lloyd Brothers Motorsports team will be volunteering efforts to raise money for the Roadracing World Action Fund, a 501(c)3 not-for-profit organization which advocates and promotes the use of soft barriers to help prevent rider injuries at racetracks.

The first-prize winner of the fundraiser will receive a 2009 Buell Ulysses XB12XP - AMA Pro Road Racing Pace Motorcycle, donated by AMA Pro Racing, and the second-place prizewinner will receive a new custom Saddlemen seat donated by Tom Seymour of Saddlemen. The motorcycle will be transported, displayed and have tickets sold by Lloyd Brothers Motorsports at each of this season's half-mile and mile AMA Pro Flat Track races.

"The safety of our competitors is of paramount importance to us, and a key to building the sport of flat track racing," said Dan Johnsen, Director of Flat Track for AMA Pro Racing. "We are very thankful for the commitment and support that Lloyd Brothers Motorsports has shown to our paddock by taking part in a second consecutive year of fundraising in support of the Roadracing World Action Fund."

"We are excited to continue to help raise funds for flat track Airfence," stated Lloyd Brothers Motorsports co-owner Michael Lloyd. "Airfence is invaluable to the safety of racers. We are really hoping that the racing community will continue to rally around this cause so that we can expand the amount of Airfence available for the safety of our racers."

There will be 1,000 tickets available. Tickets will be sold at each AMA Pro Flat Track half-mile and mile event for $20.00 each and the winners will be drawn and announced in front of the grandstands at the final race of the season.
Donations can also be made via the Lloyd Brothers Motorsports website: http://www.lloydbrothersmotorsports.net/airfence.htm

Winners do not need to be present at the time of the drawing; they will be notified after their ticket is drawn. To learn more about Airfence or to donate directly to the Roadracing World Action Fund, please visit http://actionfund.roadracingworld.com/.

About the Roadracing World Action Fund:

The Roadracing World Action Fund (http://actionfund.roadracingworld.com/) is a 501(c)3 not-for-profit organization which advocates and promotes the use of soft barriers to help prevent rider injuries at racetracks. Since it was founded in 2001, the Roadracing World Action Fund has raised approximately $900,000 in donations used to deploy Airfence.