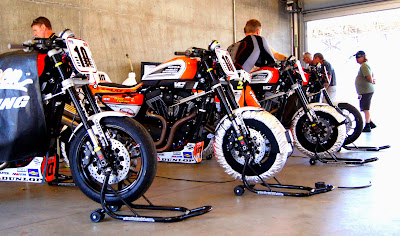 Tyler O'Hara can be seen talking with one of his team members during the AMA Pro Vance & Hines XR1200 Series test at the Indianapolis Motor Speedway on August 11, 2012.  Teams were on hand to take part in tire testing in preparation for round 9 of the season to be held during the 5th Annual Red Bull Indianapolis MotoGP over the August 17-19 weekend.

O'Hara, who won the inaugural race at IMS during the series' debut in 2011, pulled out the race 2 win at Indy yesterday by just over 1.8 seconds on his #29 JCR/Scrubblade/Bartel's H-D/RS Taichi-sponsored Harley-Davidson XR1200 over Kyle Wyman, who had won the previous race on Saturday, held nearly a 4 second lead in the 10-lap event on the 2.6 mile Brickyard track before doing his 'Superman' impression while taking the checkered flag.  O'Hara had crashed while ahead in race 1 only to remount to eventually finish just over 15.7 seconds behind Wyman.

O'Hara's team mate, Josh Chisum, rode his #10 Bartel's XR1200 to finishes of 13th and 12th over the course of the three-day event which saw qualifying take place on Saturday afternoon and part time flat tracker and road racer PJ Jacobsen taking the pole on the #99 MOB Racing machine.

Check out the full press release below and a big thanks to AMA Pro Road Racing for putting on a great show alongside the MotoGP regulars over the weekend!

The JCR/Srubblade/Bartel's Harley-Davidson ace took the checkered flag in trademark 'Superman' fashion after escaping to a 1.891-second margin of victory, an advantage he had worked up to nearly four seconds before cruising to his one-sided win.

However, in the race's opening stages, it looked as if it would be MOB Racing/K Tech/Orient Express/Moroney's P.J. Jacobsen who earned redemption. The gifted wild card was motivated to score a big result after he was initially believed to be the victor in yesterday's abbreviated race, only to be dropped down the order after an AMA Pro investigation determined his bike caused the race-ending red flag. 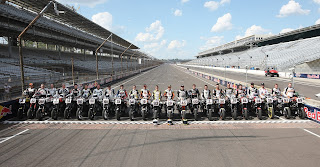 Entrants in the 2012 AMA Pro Vance & Hines XR1200 Series for round 9 at the Indianapolis Motor Speedway line-up along the yard of bricks at the start/finish line prior to the weekend's events as part of the 5th Annual Red Bull Indianapolis MotoGP.  AMA Pro Road Racing photo by Brian J. Nelson.


Jacobsen got off to an exceptional start in his bid to win on Sunday, slicing into the lead on the opening lap and opening up a 1.873-second advantage over O'Hara before crashing from the lead and ultimately out of the contest on lap 4.


While O'Hara worked up his cushion in first, Wyman, Carlson, and Fong repeatedly swapped positions in a wide variety of ways, from hard braking overtaking to double-drafting maneuvers.

XR Showdown leader Wyman narrowly came out on top for the runner-up spot when the trio's last-lap tactics were put to the test. Carlson scored the final position on the podium by a scant 0.070 seconds ahead of the fast-learning Fong.

After claiming another victory at the fabled Brickyard where he earned his maiden AMA Pro win one year ago, O'Hara said, "It was really awesome. I felt like yesterday I got a little bit unlucky that we were able to restart the race after the red flag. I had some bad luck, and that's not a good way to start the chase. So now, my goal is to win every race here on out to stay in the hunt. It's going to be tough no matter what.


"P.J. was riding awesome, and Kyle and Benny were up there. P.J. tucked the front and crashed, and I just put my head down. I built up a nice gap and was just monitoring the gap through my pit board.

"It's just awesome. From yesterday and how it went, to rebound like that feels really good. This place is really special to me -- I got my first win here a year ago and, ever since, it's just sort of been a blur."

Carlson said, "Yesterday was kind of a gift, but today I think we earned the podium position. I think we had the speed to get second place -- I just had a little trouble getting off the corners and getting down the straights. Kyle is a bit lighter than me, so he gets down the straightaways pretty good, so the only option I had was to go really deep on the straights, and I did that four or five times. We battled all race, and I had a lot of fun."

Michael Barnes, who made his debut with the KLR Group/Spyke's Harley-Davidson/Vesrah Racing squad at Indy, finished a lonely fifth. The veteran pilot crossed the stripe some seven seconds off the podium and more than 2.5 seconds clear of an intense scrap for sixth behind him.