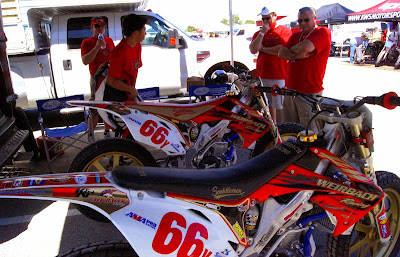 Things may look calm and relaxed at this moment in the Weirbach Racing team pit area at the Lucas Oil Indy Mile round of the 2012 AMA Pro Motorcycle-Superstore.com Pro Singles Championship Series, but believe me things start to get heated up real quickly just a few minutes after this shot was taken as the 2011 Pro Singles Series Championship-winning team was getting ready to go out and make their mark in the ultra-competitive 'junior' series that accompanies the AMA Pro Flat Track Harley-Davidson Insurance Grand National Championship presented by Motorcycle-Superstore.com schedule.

And to say that Richard Weirbach (far right, arms folded) and his son Ted (background left, with water bottle) know how to scout out talent is a serious understatement for the Iowa-based Pro Singles Championship competitors.

After winning the '11 Championship with rider Mikey Martin, the team was forced to revamp over the off season and went into the first events of the season at Daytona in March with former Horizon Award winner Ryan Wells as their rider.  Things were looking good for the team as they were fighting for the championship when suddenly just before the Peoria TT round on August 12, Wells decided to go it alone for the remainder of the season.  But instead of sitting back and wondering what to do, the Weirbachs put their efforts into high gear in order to find a rider for one of the biggest events of the season with just a few days to go before the bikes hit the track.

Well, the talent they picked in Dominic Colindres was by far an excellent choice, as their new rider went out and won the first event of his career with the team and almost immediately jumped into the fire of fighting for the Pro Singles Championship.

Six days later and the team was at the Indiana State Fairgrounds mile oval for their second race outing together, and Colindres and the team fought through what was considered a mediocre qualifying spot, made some changes and adjustments, and by the end of the evening the California teenager had brought the #66Y Weirbach Racing/General Engineering/Barnett/Spectro Oils-sponsored Honda CRF450R home into the 2nd-place spot.  And he has also vaulted himself into the 6th-place spot in the 2012 Pro Singles Championship, only 30 points out of the series' lead.

With a 1.5 finishing average in their first two outings together, again the Weirbach Racing team and rider Dominic Colindres have put a firm exlamation point on their quest to repeat as series champions and garner a rider championship for the youngster from California.  Pretty impressive in anyone's book and assuredly in mine and those that know racing in The Rolling Thunder Show and the greatest racing series on wheels in the world.

With any luck, the upcoming rounds at the Springfield Short Track and Springfield Mile II won't get rained out/postponed/canceled and the little team that could can again put their mark on the rest of the field at the Labor Day Weekend gathering inside the Illinois State Fairgrounds.  At this point, the rest of the field might want rain to wash out the great run these guys are having!

Check out the full press release below while Dominic gets suited-up for Springfield like he is in the shot above, and good luck to him and the Iowa-based team for this weekend and the rest of the season!


This past weekend was the Indy Mile in Indianapolis, Indiana.  Based on the number of riders signed up and MotoGP being the next day, I would consider this one of the biggest races of the year.  I didn't know what to expect heading into this event.  This would be my third mile and first mile being on the Weirbach Racing team.  I thought I could have another podium finish since I had a 4th-place at the previous mile in Sacramento, California.

I started out the day by meeting Ted Weirbach for the first time and then looking over the bike and discussing bike setup.  I walked out onto the track and saw that it was a cushion.  I asked some riders that previously rode this track how it would be and they told me it would groove up, which is to my liking. 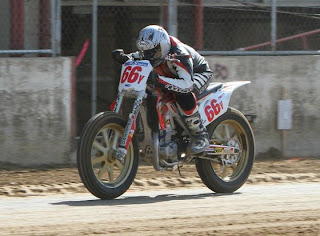 Dominic Colindres #66Y is shown on the Weirbach Racing Honda CRF450R during one of the qualifying sessions for the AMA Pro Motorcycle-Superstore.com Pro Singles Series at the Lucas Oil Indy Mile on August 18, 2012.  Photo courtesy of the Weirbach Racing team.


My poor qualifying position put me on the back row for the heat.  I got a great start and was in about 4th place.  I started falling back a little bit but then started to figure out the track.  I was riding the first half of the race in about 6th-place but then started to pass riders every lap.  I caught up to the top-3 and finished the heat in the third position.

Right before the main event, Dick and I decided to make a last minute gearing change.  I was lined up on the first row, second from the outside.  The race started and I got a horrible start.  Somehow I got up to second place but then overshot turn 3.  The race was red flagged due to a crash in turn 2.

I got the hole shot on the restart and led the first couple of laps.  Vandekuur, Palmer, and I battled the whole race, passing each other a couple times a lap.  The white flag came out and I felt like I was in a position to win.  I slipped up a little in turn 3 and Vandekuur pulled away.   I caught up just to finish .057 seconds behind.  This second place was very good for me and the team and gives me good confidence for the rest of the races.


The next race is Springfield, Illinois with a short track on Saturday and the mile on Sunday.  Stop by the pit and say hey!


Special Thanks to our sponsors: