Round 9 of the 2012 AMA Pro Flat Track Harley-Davidson Insurance Grand National Championship presented by Motorcycle-Superstore.com at the Peoria TT saw a familiar face at the front of the red flag-delayed National main on both occassions as Henry Wiles kept it up front to lead from flag to flag to take his record-tying 8th win in-a-row.  Wiles rode his #17 Don's Kawasaki/DPC Racing/Nick Nazzisi/Schiller's Tree Svc-sponsored KX450F to a runaway win that was almost without error except for running a few feet wide with just a few laps to go running it into turn one.

Jammin' Jared put in a superb ride throughout the 25-lap main to gain a few extra points over title rival Jake Johnson (185-165) heading into round 10 this coming weekend at the Lucas Oil Indy Mile, and said on the podium that 'one of these days' he's going to 'get a win here' and his flawless lines throughout the day left little doubt as to that happening sometime down the road as he has finished runner-up to Wiles at Peoria for three years straight now.

Johnson, who along with Wiles and Mees won his heat to make the Dash for Cash, took the #1 Zanotti Racing/Schaeffer's H-D/Southland Pro Suspension/Arai-sponsored Honda home in the 3rd-place spot, after finishing behind Sammy Halbert, Mees and Wiles in the Dash.  Johnson also rode like a man possessed throughout the National main and improved on his 4th-place finish from last year at the 65th annual event at the Peoria Motorcycle Club facility.

Taking a few weekends off from his full time job of competing in the AMA Pro Daytona SportBike Series, JD Beach followed Johnson to the checkers in both his heat race and the Dash, and then set off in search of the leaders after getting held up on the re-start to come off 7th after the first go around (the shot above with JD on the outside of Henry was the first lap, original start of the main).  Beach worked his way around Rob Pearson #27, Briar Bauman #10Z and Sammy Halbert #7 to take the #95 USC Racing/Red Bull/Bell Helmets/Alpinestars-backed Kawasaki to rally to a great 4th-place finish.  Beach put on one of the finest riding clinics on the track for the day by methodically working his way around the early front runners.

Slammin' Sammy had a couple of 'oh sh..' moments in both the original start and re-start at Peoria but came through like the championship contender and defending '11 Singles Series Champ he is to take his #7 The South Ass/Fredericktown Yamaha/GYTR/Van's Yamaha-sponsored YZ450F to a strong 5th-place finish.  Halbert also grabbed another point to climb within 9 points of runner-up Johnson in the fight for the 2012 AMA Grand National Championship.

Luke Gough was looking great all day on the #62 Nicely/Eaken Yamaha until his first-lap fall coming off the jump on the back stretch.  At last report just a few minutes before this was written he was undergoing surgery to his broken pelvis.  A very tough break for the likeable and hard-working former Australian flat track champion.

Bryan Smith (pictured outside Johnson #1 on the original start) rode it home to a respectable 9th-place finish after suffering a flat tire at the Castle Rock TT eight days earlier.  Riding his #42 Barry Smith-tuned and self-prepped Honda, Flyin' Bryan got some solid points to help keep him in the 4th spot in the championship with 112 points heading to the next event this weekend at Indy in which he will undoubtedly be the odds-on favorite to take the win on the Crosley/Howerton/Eaken Kawasaki over the Red Bull Indianapolis MotoGP Weekend.

In the AMA Pro Motorcycle-Superstore.com Pro Singles Championship shoot-out in the valley at Peoria, the story of the day was split into two ends of the spectrum.  The good side saw Dominic Colindres ride the #66Y Weirbach Racing/General Engineering/Barnett/Spectro-sponsored Honda CRF450R to his first-ever win and in his first-ever ride for the defending 2011 Pro Singles Championship-winning team out of Ottumwa, Iowa.

Signed just before race weekend after Pro Singles Championship runner-up Ryan Wells #94B split from the team early in the week, Colindres hooked-up with the father & son team of Richard and Ted Weirbach to contest their powerhouse bikes at the valley of thunder and never set a foot wrong all day long.  Not only did he win the try-out with the team, he's got a ride now through the end of the season especially taking Richard on the victory lap.  Great job guys!

Wells finished 8th on his Wells Racing Honda to move to within one point of Pro Singles Championship leader Garit Callies.  And this is where the bad end starts.

During heat two Callies, Robbie Treinen and Adam Bushman were all involved in a pile up off of the jump.  Bushman suffered hip injuries (he was operated on this evening per latest updates picked up from Flat Track Live and Flattrack.com on Facebook) and Treinen was held overnight and was dazed and confused (also according to above sources) and was subsequently released from the Peoria hospital earlier tonight and joking about how he was going to get to Indy this weekend.

Points leader Callies unfortunately suffered much worse in the melee.  He's currently on a breathing tube but suffered some bleeding on the brain, though by last report that has stopped and he has movement in all of his extremities and does recognize his family.

Our prayers go out to ALL of the riders and families involved and hope for a speedy recovery for all!


Check out the press release below from AMA Pro Flat Track and get your ticket now as The Rolling Thunder Show heads to the Indiana State Fairgrounds-hosted Lucas Oil Indy Mile in what will be one of the fastest and best-attended events of the season on Saturday, August 18.


PEORIA, Ill. (August 12, 2012) - Henry Wiles could have taken his girlfriend out to dinner and a movie during this year's Peoria TT and still would have managed to come away with another AMA Pro Flat Track victory. With over half the season in the books, Wiles took no prisoners Sunday afternoon as he stole the show and ran away with the checkered flag for the eighth straight year at PMC Race Park.

It was a great day for racing as thousands of passionate fans wrapped around the premises only feet from the track as they witnessed the true power that the bikes of AMA Pro Flat Track produce. Feeding off the crowd's roar, Wiles was in a different area code right from the get-go during the AMA Pro Harley-Davidson Insurance Grand National Championship presented by Motorcycle-Superstore.com and Lucas Oil main event and found himself pumping his fist as he crossed the finish line. 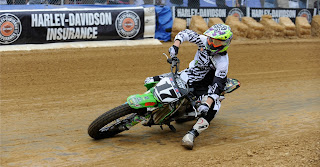 Henry Wiles on the #17 Don's Kawasaki KX450F led both starts in the National main and never looked back yesterday in taking his record-tying 8th straight win at the Peoria TT in round 9 of the 2012 AMA Pro Flat Track Harley-Davidson Insurance Grand National Championship presented by Motorcycle-Superstore.com season.  AMA Pro Flat Track photo by Dave Hoenig.

"It feels really good," Wiles said. "I just want to thank my sponsors, these guys don't mess around. I want to thank my family and my girlfriend. I'm thankful that I was able to come out on top. I went hard from the get-go and was fortunate to pull the holeshot and run a clean race. I'm just so happy right now. The Peoria fans are great, I love coming to race here."

Henry Wiles (Don's Kawasaki) has become a household name here in Peoria, Illinois, as he's been the clear-cut winner for eight straight years as he continues his dominance at the historic venue. Second and third place finishers, Jared Mees and Jake Johnson made several attempts at closing the gap during the race, but unfortunately for them, Wiles never gave an inch and diminished any hope they might have had in catching him. JD Beach and last week's winner Sammy Halbert rounded out the top five, although it was no easy task as they had to fend off fierce competitors to claim their spots.

With the win, Wiles now sits in fifth place among the standings, poised to make a run at the title. He stands behind the likes of elite competitors such as; Jared Mees (Montgomeryville Cycle), Jake Johnson (Zanotti Racing), Sammy Halbert (Fredericktown Yamaha) and Bryan Smith (Oasis Homes).

Pole sitter Dominic Colindres (Weirbach Racing) got off to an incredible start in the AMA Pro Motorcycle-Superstore.com Pro Singles main event, but it was erased as a four-bike pile-up on lap two forced the red flags to come out and demand a restart. However, the restart had no effect on Collindres as he got the holeshot for the second time and never looked back on his way to victory.

There was no denying Collindres as he was on a different planet winning by more than a full second over second-place finisher Stephen Vanderkuur (Parkinson Brothers Racing Honda). Justin Reed (Rich King Racing) claimed third place with a solid performance on the KTM 450 SX-F.

The most exciting battle was the race for the fourth and fifth slots where the margin between six riders was less than a second. Rodney Spencer Jr. (831 Pinnit) and Nick Mataya (Shoe Racing) snuck in to round out the top five, respectively.

"I got the holeshot after the restart, usually something goes wrong in a situation like that but it actually helped me," Collindres said. "I really liked the track and I just want to congratulate Stephen (Vanderkuur), he was on me the whole way and really gave me a good run. I also want to thank the fans and everyone who came out and cheered me on."

The stars of AMA Pro Flat Track will return to Indianapolis, Indiana on August 18, 2012. Visit http://indymile.com/ for tickets.

AMA Pro Racing is the premier professional motorcycle racing organization in North America, operating a full schedule of events and championships for a variety of motorcycle disciplines.  Learn more about AMA Pro Racing at www.amaproracing.com.
For additional information contact: