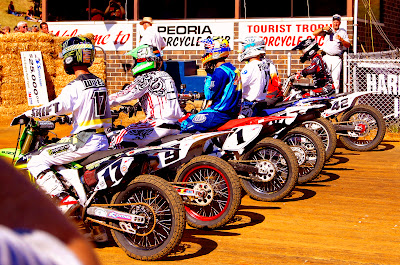 The 2012 AMA Pro Flat Track Harley-Davidson Insurance Grand National Championship presented by Motorcycle-Superstore.com season gets ready to kick back into action today at round 8 of the series' schedule at the Castle Rock TT in Washington State.  The stars of The Rolling Thunder Show will park their Twins Series machines after last weekend's ultra-exciting Sacramento Mile to hop on their Singles Series 450s and take to the long-running event put on by the Mount St. Helens Motorcycle Club.

With the series hitting the mid-point of the 2012 calendar, the time is now for everyone to start showing their cards in their respective quests for the 2012 AMA Grand National Championship title.  With Jared Mees holding a slim 11-point lead in the title chase to defending and 2-Time AMA Grand National Champion Jake Johnson (141-130), tonight's round should make for a great preview of what is to come as the series hits it's stride going into the final 9 races of the year.

And today's round in Castle Rock will also have the addition of AMA Pro Flat Track's Live Video & Streaming services for fan's to be better able to follow the action at the track along with Live Timing and Scoring and Miriam Deitcher's Flat Track Live @ Facebook.  And it was also announced that 2000 AMA Grand National Champion Joe Kopp #3 will be returning to the track again today in his home state of Washington to give the young guns a run for their money.

The shot above from round 14 of the 2011 AMA Pro Flat Track Harley-Davidson Insurance Grand National Championship presented by Motorcycle-Superstore.com season at the Peoria TT should give fans a good preview of some of, if not THE top contenders for today's event at Castle Rock.

On the inside pole, eventual event winner Henry Wiles on the #17 Monster Energy Kawasaki/Jones Bros/Don's Kawasaki/Arai-sponsored KX450F gets ready to lead the front row into the 25-lap National main, and will surely be an odds-on favorite today.  The 2-Time Singles Series Champion is hoping to win his 22nd AMA Grand National event today and his 17th in the Singles Series division.

Alongside Hammerin' Hank is '09 & '11 AMA Grand National Twins Champion Jared Mees on the #9 Lucas Oil/National Cycle/Rogers Lake/Montgomeryville Cycle-backed Honda CRF450R.  Jammin' Jared will be looking for his first Singles Series win of the 2012 season after garnering his first Twins event win of the year earlier in the season at the Hagerstown Half-Mile.

Jake Johnson on the #1 Zanotti Racing/Schaeffer's H-D/Boughner Racing/Motion Pro-sponsored Honda will be looking to shore up his deficit to Mees in the 2012 championship hunt and for his first win of the season as well.  Johnson hasn't missed a podium since Daytona and has been his usual, casual but focused-self this season and there isn't any reason to believe that his late-season surges of the past few years won't continue as the meat of the schedule starts to unfold today.

Morton, IL. resident Rob Pearson on the #27 Matt Reecy Racing/RPM/WKR/Moose-backed Yamaha YZ450F has had some strong finishes in the 2012 season by amassing a handful of top-10 finishes in the last three events (Lima 7th, Hagerstown 10th, Sacramento 8th).  Bugs will be looking to score his first points of the year in the Singles Series event today at Castle Rock.

Slammin' Sammy Halbert will unload his #7 Yamahas today as the odds-on favorite to win in his home state and his second-event-in-a-row at the Castle Rock TT.  The Woody Kyle Racing/Fredericktown Yamaha/AGV/Kings Kustoms-sponsored rider (partially obscured above) is as tough as nails at every event he contests and today should be even more motivation for the '11 AMA Grand National Singles Series Champion to add to his early-season win at the Lima Half-Mile.  If you're a betting person, put your money down on the Lucky 7 today.

Last week's winner from the Sacramento Mile, Bryan Smith, is shown rolling up to the line on his #42 FastHog.com/American H-D/Rockysonline.com/Boughner Racing-backed Honda.  Flyin' Bryan is the first to admit that Castle Rock is one of his least-favorite venues, but should have the adrenaline and steam from his great outing last week to see him through to a respectable finish today on the infamous TT course.

More then likely, your winner today will come out of this group of racers.  But as with any of the stops on The Rolling Thunder Show there is a handful of other riders expected to race today that also will have a great chance to score a win.  Among them are Daytona Short Track II winner Matt Weidman, who will be returning to the track after his Lima get-off, '11 Rookie of the Year and another Washington State resident Brad Baker, JD Beach and the returning Joe Kopp, just to name a few.

We've added the full press release from AMA Pro Flat Track below and some helpful links to get you through the day as the greatest racing series on wheels in the world hits the jump at the Castle Rock TT in round 8 of the 2012 season.  First practice rolls off today at 6:30 PM EDT/3:30 PM PDT and you don't want to miss a minute of it!


DAYTONA BEACH, Fla. (August 3, 2012) - The AMA Pro Harley-Davidson Insurance Grand National Championship presented by Motorcycle-Superstore.com and Lucas Oil makes its one trip to the Pacific Northwest on the first Saturday of August, before heading back to the Midwest for the second half of the 2012 schedule. 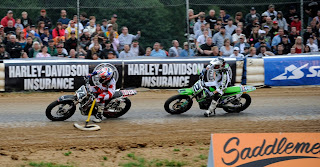 Scooter Vernon on his #74 Innovative Suspensions-sponsored Honda CRF450R leads Kenny Coolbeth, Jr. on his #2 Chaplin Kawasaki-backed KX450F during heat 3 action at the Castle Rock TT, round 13 of the 2011 AMA Pro Flat Track Harley-Davidson Insurance Grand National Championship presented by Motorcycle-Superstore.com season.  Coolbeth would work his way around Vernon to finish 2nd to Vernon's 3rd-place finish to qualify for the National main behind winner Brad Baker.  Vernon, a Washington State resident, would end the day in 18th-place out of the 19-rider main event, while Coolbeth would bring his new Kawi home in the 7th-place spot.

At press time it wasn't known if Vernon would return for this year's event being held later today, while Coolbeth still recovers from his Lima injuries and is expected to return to the track at the Lucas Oil Indy Mile on August 18.  AMA Pro Flat Track photo by official photographer Dave Hoenig/Flat Trak Fotos.com.

Mount Saint Helens Motorcycle Club will be hosting Round 8 of the 16 race season on their fabled TT track in scenic Castle Rock, Washington.


As the season reaches its midpoint, the points race in the AMA Pro Harley-Davidson Insurance Grand National Championship is shaping up to be a two rider race as Jared Mees (Rogers Racing / Montgomeryville Honda) and defending Harley-Davidson Insurance GNC Champion Jake Johnson (Zanotti Racing) methodically pull away. "We came from a long way at Sacramento to finish third I feel really confident," said Mees. "I lost a little bit in the points, but we were 11 ahead going into Hagerstown, I won that and went to 15, now we are at 11 again. It's just cat and mouse really."


Hometown hero, Sammy Halbert (Fredericktown Yamaha) sits third in points thirty three points down to Mees. Halbert recorded his first Grand National victory on the tight, technical TT track in 2007 and backed that up when the series returned in 2011 with another win. No doubt Halbert hopes to make up significant ground.


Jared Mees has a third, fifth and second on his Castle Rock resume while defending Grand National Champion, Jake Johnson won the 2006 race, the only other Castle Rock National this century. Johnson has since posted sixth and seventh place finishes.


The Northwest flat track fans always look forward to the castle Rock TT as it allows many of their local heroes the chance to come home from the Grand National series and perform in front of friends and family.


Series regulars, the Halbert brothers, Sammy and Jethro and Brad Baker will be joined by none other than former Grand National Champion Joe Kopp, who is stepping out of his brief retirement to return to the track he cut his racing teeth on.


Kopp qualified for his first AMA Pro Flat Track Grand National Main Event at Castle Rock in 1993 and finished in fifth place. Kopp has made five Castle Rock GNC main events with a second in 1994 as his best finish. Look for Kopp to show the "youngsters" a thing or two on his Latus Motors Kawasaki.


Much like the Grand National Experts, there are several Motorcycle-Superstore.com Pro Singles riders who hail from the Northwest, but spend their summers chasing the national scene. Kirkland Racing teammates Wyatt Maguire and Hunter Taylor are currently seventh and 11th in the Motorcycle-Superstore.com Pro Singles point standings and they will be joined by many of their local rivals to take on the other series regulars.


Current points leader Gerit Callies (Fun Mart Cycle) currently holds an 11 point lead over Ryan Wells (Weirbach Racing), the 16 year old is riding his first year in the class. Callies has the advantage of having two years under his belt including the win of the 2011 Castle Rock TT Motorcycle-Superstore.com Pro Singles Main Event. Callies has three wins this year as he comes to grips with his 450 KTM.


Texter, the only female rider to win a Motorcycle-Superstore.com Pro Singles main event will be making her second appearance on the TT as she finished 11th in the 2011 race.


How to Catch the Action