There were several good stories and several game-changing plans that came into play at round 10 of the 2012 AMA Pro Flat Track Harley-Davidson Insurance Grand National Championship presented by Motorcycle-Superstore.com season at the Lucas Oil Indy Mile.  In no particular order, Jake Johnson crashing out of the National main, Bryan Smith looking to make it a runaway before his bike went south, Sammy Halbert taking his first mile win of his young career to seal the deal on the flat track grand slam, and Brandon Robinson bringing the Kawasaki home in the 2nd-place spot for his best-ever finish and first podium of his young career in a Twins Series Expert final.

With Flyin Bryan the hands-down favorite on the #42 Crosley Radio/Howerton Motorsports powered by Eaken Racing 650R-based parallel twin, it was a big surprise when the electricals appeared to fail on the rocket Kawi just past the half-way point in the race.  With Jersey Jake having just earlier crashed out on the #1 Zanotti Racing/Schaeffer's H-D-backed XR750 (and his first crash in a Twins Series race in over two years), it left the door open for Slammin' Sammy to slingshot around JJ in the points race after his strong win at the Indiana State Fairgrounds mile oval.

Jared Mees' fine run home into the 3rd-place spot on the #9 Rogers Racing/Lucas Oil-sponsored XR750 put him in firm control of the points battle with six events left to go in the season, although at this point you not only can't count out the 2-Time and defending Champ, Johnson, Sammy is also making a strong point to the rest of the competitors that he wants in on the 2012 Grand National Championship chase as well.

One of the best feel-good stories of the day was Brandon Robinson's superb ride onto the podium with his 2nd-place effort on the #44 Werner-Springsteen Racing/Big Dawg Racing-backed Kawasaki after having just scored his previous-best effort of 4th-place at the Sacto Mile some three weeks earlier.  BRob44 looked to be back in top form after his nasty 'out of the park' accident at the 2009 Lucas Oil Indy Mile, and no one was happier for him then himself after all he has come back from while healing from his injuries and surgeries.  And it was a great shot for the iconic pairing of multi-time champion tuner Bill Werner and 3-Time AMA Grand National Champion Jay Springsteen, who struggled throughout the 2011 season and have really turned it around with Robinson on one of their bikes.

Although his 11th-place run wasn't indicative of how hard he had been working all day at Indy, Stevie Bonsey was paired with Robinson on the #80 Werner-Springsteen Kawi and won his heat race and ran up front in the National main until the waning laps where he slipped back.  Still a great effort for the Californian and another reason to keep him on the Mean Green Werner-Springsteen machine to help develop the bike and his talents, which in both cases appeared to be a great match at Indy.

Sammy really had to work for this win at Indy on his #7 South East Harley/The South Ass-backed XR in running down mid-race leader Robinson, but once he got around him with just a few laps to go used his experience to keep it out front and nip him at the line by literally just inches.

Henry Wiles brought home a hard-fought 4th-place effort on the #17 Lloyd Brothers Motorsports/Foremost Insurance Group-backed Ducati V-twin, after working his way through a mid-pack start.  Kenny Coolbeth, Jr. on the #2 Harley-Davidson Motor Co/Screamin' Eagle-sponsored XR750 sailed home for a 5th-place finish in his first race back after suffering injuries in late June at the Lima Half-Mile.  Brad Baker on the #12 Dodge Bros/Atherton Family-backed XR750 got a 6th-place finish for his great run at Indy, and Rob Pearson brought the #27 Eaken Racing Kawasaki home for a 7th-place finish after opting for the Kawi after having run one of Skip Eaken's Roeder XRs earlier in the day after the Memphis Shades hauler broke down on the way to the track.

Also of note, Shawn Baer made his first-ever Dash for Cash and front row start in a National main on his #32 Baer Racing Products/KB5-sponsored Kawasaki and finished in the 10th-place spot in the main, Matt Weidman in his first ride on the #20 Scott Powersports Kawasaki rode a fine race at Indy for his 8th-place effort, and Jeffrey Carver, Jr. on the #23 Kiesow Racing/Carver's BBQ-sponsored XR ran solid all night for a 9th-place finish.

The shot above shows Johnson, Smith, Bonsey, Halbert, Mees, JD Beach (on the #95 machine who suffered some sort of mechanical for a 16th-place finish on the USC Racing Kawi), Brad Baker (just behind Beach), Shawn Baer and Henry Wiles (just behind Baer) and Carver.  2nd-place finisher Robinson can be seen coming off the line with the pack at the start of the 25-lap National just over Halbert's right shoulder.

The stars of The Rolling Thunder Show head to the Illinois State Fairgrounds this Saturday, September 1 and Sunday, September 2 for the running of the Springfield Short Track and Springfield Mile II, rounds 11 and 12 of the 2012 season.  But with Hurricane Isaac looking to threaten everyone's last holiday weekend of the summer throughout the mid-section of the continental 48, keep an ear and eye open for what changes may have to be made in order to get the weekend of superb racing in. 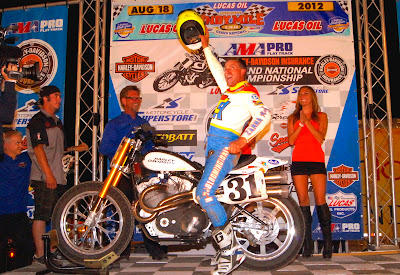 If you're an Indy local such as we are, seeing Dan Ingram win his semi at the Lucas Oil Indy Mile was like the stuff that dreams are made of.  And apparently almost the whole house was from Indy as Dapper Dan got the biggest response from the crowd when he won the first semi of the night over Matt Weidman and Rob Pearson to slot them all into the National main.  Every paying butt in the house (and even many of us in the pits on-hand to see and cover the race) was on their feet and roaring as Dan worked his way through the semi to get back on the podium again in his 2012 return to The Rolling Thunder Show.  And when that helmet came off on the podium his roar could be heard all the way back to at least his home in Clermont, some 12 miles west of the fairgrounds

For a man 47 years young he looked like the young sensation he was when his career was cut short back in the early '90s.  Dan worked his way through the field like playing a chess game and put the #31J TCR/Indy Southside H-D-backed XR at the front with a run that looked like he had planned it right from the start, and another of the great stories from this year's edition of the Lucas Oil Indy Mile.

Although the engine on the TCR XR750 went south in the National main relegating the Indy resident to an 18th-place last-place spot, everyone on-hand knew that Ingram was back where he belonged, fighting it out on the track with the other starts of The Rolling Thunder Show.  Great job man!