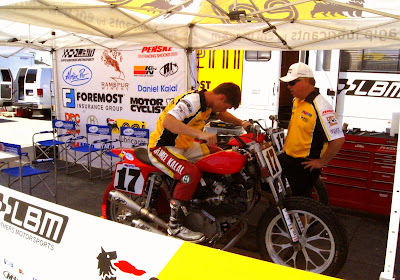 Henry Wiles works on final positioning of the controls on the #17 Lloyd Brothers Motorsports Italian 'L' twin along with the help of crew chief Dave Gamble during the team's preparation for round 10 of the 2012 AMA Pro Flat Track Harley-Davidson Insurance Grand National Championship presented by Motorcycle-Superstore.com season at the Lucas Oil Indy Mile on August 18.

After a rough start to the season at the Springfield Mile I round in late May, the Ohio-based LBM team regrouped for the second Twins Series event of the year one month later at the Lima Half-Mile, and along with the hard work and team effort, not to mention Hammerin' Hank's skill on a flat track racing motorcycle, came out of the event with an extremely solid 2nd-place finish.  With a DNQ at Hagerstown and then suffering a blown motor at the Sacramento Mile round in late July, the team was ready for a solid finish to get their top-level program back on track towards the front of the field.

Enter round 10 of the 2012 season at the Lucas Oil Indy Mile and a packed house, thanks to the European contingent on-hand for the Red Bull Indy MotoGP round a few miles down the road at the Indianapolis Motor Speedway, and the LBM/Foremost Insurance Group/Rampsur Winery/ENI USA-sponsored team saw their stellar efforts turn for the better as 2-Time Singles Series Champion Wiles brought the big 1098-based mount home in 4th-place, the team's second top-5 of the year.

These guys never say die and through the thick and thin and the ups and downs that befall racing teams and riders at times, they worked through the muck and came home again with a great finish to show for their hard work.  Between co-owners Dave & Mike Lloyd, crew chief and ex-IndyCar and CART wrench Gamble, frame fabricator Lyle Pizzino and a cast of other family members and crew (and top ace Wiles in the saddle) the long-time contenders in The Rolling Thunder Show could again leave the track with all of their heads held high and proud.

For the second year in-a-row, the team is again putting on what could be an annual event in raffling off a chance to win a 2009 Buell (and should, with the help of AMA Pro Flat Track, Saddlemen, and Arai-last year's fund raiser 2nd-place prize sponsor) that all funds collected will benefit and be given to the RoadRacing World Air Fence Fund for Dirt Track.

What I personally (and many others even more in-the-know then myself) consider the single best thing a race fan can do to help support the sport, and especially the safety of the riders in the sport, is to donate to the Air Fence Fund.  Since air fence has been incorporated as a protective device to keep the riders and machines from bouncing off of or directly striking fixed objects, the injury and loss of life that was once an even more prominent fixture in motorcycle racing of any kind has fallen off dramatically.

Air fence acts as a protective 'pillow' that not only keeps the aforementioned out of harm's way, but also is designed to help envelope a fallen rider and machine in order to keep them from traveling at an alarming rate of speed into objects that are fixed at any given racetrack.  Whether it would be armco barriers, armco support arms, fencing that lines a track or even light poles placed in a corner. the use of air fence in the last decade-and-a-half or so has lowered the chances of severe injuries at racing events.

The Lloyd Brothers team for the last two years has taken on the task of transporting the '09 Buell AMA Pro Road Racing pace bike to each of the Twins Series event of the season, making up banners and tickets and talking to the fans at each of those events about how important a donation to the fund can be to riders and to racing as a whole.  Last year alone the raffle raised over $11K, overall in the top-5 of donations made to the dirt track side of the donations.

Obviously times are tough for a lot of us financially speaking, but some of us still get a chance to get to a few races a season in order to enjoy the sport we all so dearly love and live for.  But for the cost of a t-shirt you can help promote the safety of the greatest sport on wheels in the world.

So before the season is over, whether you make it to an event or even just buy your ticket online, take the time to purchase a $20 ticket towards the chance to win a special motorcycle in AMA Pro Road Racing history, and even more importanty making a donation that could pay-off to the fund that has helped save many of those racers we all adore watching swapping handlebars at high speed.  And when you get by the LBM pits to get your ticket, tell 'em Stu's Shots sent you and take the time to talk it up with one of the highest-profile and most professionally run teams in the sport, not to mention one of the funnest and finest group of people that have been campaigning The Rolling Thunder Show for over two decades.

Check out the press release below from the boys to find out where/how you can go about helping to keep the riders in the saddle and out of the fence! 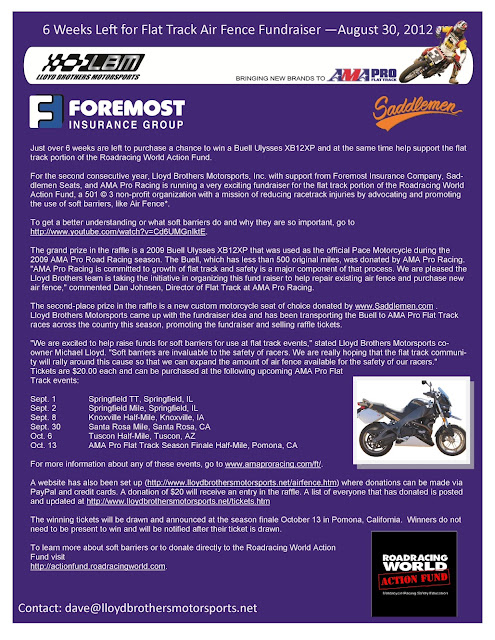