As the calm settles in before the final storm, the leading group of riders after the red flag delay at the Springfield Mile II ponder their final thoughts and strategies before the final 5-lap dash to determine the winner in round 16 of the 2011 AMA Pro Flat Track Harley-Davidson Insurance Grand National Championship Series.  As is per the usual at the Illinois State Fairgrounds-held, and IMDA-run event, a storm broke out several times throughout the course of what would be a two-part nail biter on the high speed track on a sunny and breezy Sunday holiday afternoon.

After the winds had subsided and the dust had settled, a now part-time, but long-time contender on the AMA Pro Flat Track Series schedule, had emerged as the winner in what was his first-ever AMA Grand National Series win.  Texan Willie McCoy had piloted his #59 Harley-Davidson of Wausau/Independence H-D/Tucker Rocky/DPC-sponsored XR750 to the top spot on the podium for the very first time in his nearly-quarter century long career.  Only contesting the Springfield and Indy rounds for the last several years, the popular rider and once-team mate to 7-Time AMA Grand National Champion Chris Carr, had beaten his friend and tutor in a wild 5-lap dash that saw the top 10 in the 26-lap main event finish withing less then a second of one another, with McCoy edging The Prince of Peoria by just .012 seconds at the final wave of the checkers.

Carr, who led 13 of the 26 laps at the stripe on his #4 Amer. Motorcyclist Assoc./Classic Harley-Davidson/DFW Honda/Arai-backed and Kenny Tolbert-tuned XR750, was almost as happy as McCoy was when all was said and done in stating that he 'didn't feel as bad finishing second to Willie' for what was his 50th Springfield Mile in his final showing at the state capital mile oval on his 2011 Farewell to Flat Track Tour.  Carr was the first to hug his former team-mate on the podium, and his emotions showed how happy he was for Willie to win the race.

Jake Johnson on his #1 Zanotti Racing/Schaeffer's H-D/Boughner Racing/Motion Pro-sponsored XR750 did exactly what champions do in yesterday's running of the iconic event-he got to the front, battled with the lead pack, and came out of the final run to the money in the 3rd place spot, just .064 seconds behind McCoy.  Johnson's finish on the mile, coupled with his 2nd place the night before on the Springfield Short Track, kept him within 10 points of overall series point leader Sammy Halbert (7th on the day and 298 points to 288 points for Johnson.)  This is the time of year champions produce, and other then not making the Dash (whereas both Halbert and 2nd spot in the points man Jared Mees did), Jersey Jake showed them all he isn't giving up that #1 plate without a real good fight.

4th place on the day (just .112 seconds behing McCoy) went to Kenny Coolbeth, Jr. on the #2 Harley-Davidson Motor Co./Screamin' Eagle/Spectro Oils/Fox-sponsored factory H-D XR-750.  The 3-Time Twins Series Champion led two laps on the day, and kept it in the lead group from the start in his quest to make the championship hunt a four-rider affair.  He finished the day 54 points behind Halbert in the standings (244), and a still-slim chance in the title fight, after winning the fastest heat on the day and bringing home a 3rd place in the Dash for Cash.

Jared Mees had a fresh, new look on his #9 Rogers Lake Racing/Blue Springs Screamin' Eagle/Lucas Oil/National Cycle-sponsored XR at the Labor Day Weekend running of the Springfield Mile.  Paying homage to the man who originally made the #9 famous, Jammin' Jared was decked out with a retro-look number plate on his H-D XR to go along with his Gary Nixon-lookalike leathers that paid a very fine tribute to the recently departed 2-Time AMA Grand National Champion.  Mees also wore a special helmet with 'NIXON' along the lower edge that was a very fitting touch to his salute to past champion and bearer of the iconic #9 number plate.

In the race, Mees fought tooth and nail with the lead pack, but was never able to put it at the front where it counted-the start/finish line.  But with another solid 5th place finish, just .261 seconds behing McCoy, Mees came out of round 16 right in the middle of the title hunt with 293 points, five back of Halbert and five up on Johnson.  Mees won his heat and the Dash to earn the third highest point tally on the day behind McCoy and Carr for his efforts, and looked great all day long while doing it.

About midway through the first part of the day at Springfield shows The King of Cool, Kenny Coolbeth, Jr. on the #2 machine leading the main pack in the day's final event at the Illinois State Fairgrounds.  Chris Carr #4, Johnny Lewis #10, Jake Johnson #1, Jared Mees #9, Bryan Smith #42, Sammy Halbert #7, Willie McCoy #59 and Luke Gough #62 form a freight train of riders working the draft as the speeds hit close to 140 mph on the fastest track in the AMA Pro Flat Track Series.

Sammy Halbert on the #7 Kings Kustoms/White's H-D/LZ Racing/KK Supply-sponsored XR750 was tough all day long in winning his heat and coming home second behind Dash-winner Mees.  He still holds a 5 point lead in the overall point standings that he hasn't let go of since the series kicked off in Daytona back in March.  His 7th place in the National main event yesterday (.428 seconds behind McCoy) was not at all indicative of the kind of day Sammy had, as he ran much stronger then his final results actually indicate.

Bryan Smith on the #42 Moroney's Fasthog.com/American H-D/Rockysonline.com/Boughner Racing-backed XR750 ran with the lead pack throughout the first 21 laps of the main event, after finishing second in his heat behind Halbert, and coming home 5th in the Dash.  But Flyin Bryan was one of the riders that crashed (mostly unhurt-possibly dislocated finger) to bring out the red flag interuption and he was credited with 17th place, with what appeared to be minor damage to both rider and machine, and leaving him 'bitten again' at the State Fairgrounds mile oval.  Smith sported a VERY cool tribute to Gary Nixon on the back of his helmet--'Godspeed #9.'  Illinois resident Rob 'Bugs' Pearson also went down, with no injuries, on the #27 USC Racing Kawasaki, on another part of the track at the same time as Smith to cause the red flag stoppage. 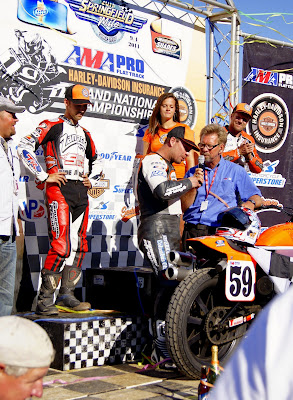 Willie McCoy explains to AMA Pro Flat Track announcer Barry Boone and the strong crowd at the Springfield Mile II event just what he was thinking with just a five-lap dash to finish out what would be his biggest day ever in AMA Pro Flat Track Grand National Championship Series racing.  Telling stories about what he was thinking and when, there was hardly a dry eye in the house when he was done, and even former team mate Chris Carr gave him a celebratory hug on the podium and went out of his way to talk about the great rider and person that McCoy is and how deserving he was of yesterday's big win.  Even 3rd place finisher Jake Johnson gets in a grin hearing the great story of the day's race.

Kenny Tolbert (Carr's longtime tuner and friend) was one of the first to greet McCoy on the podium and shake his hand for his great effort on the day.  Tolbert taught McCoy the ins and outs of the XR, and McCoy built his own winning machine based on the tutelage of one of the best in the business.  We already know Tolbert's one heckuva guy and wrench, and he's obviously a great teacher, as McCoy is obviously a great student.  Like Bill Murray said in 'Caddy Shack' in the early '80s, '...it's another Cinderella Story.....'

SPRINGFIELD, IL (August 5, 2011) - The thousands of flat track fans who filled the Illinois State Fairgrounds grandstands for Sunday night's AMA Pro Harley-Davidson Insurance Round 16 were treated to one of the most thrilling sights in motorsports: a Mile specialist at work on the kind of circuit that made flat track famous. The top ten riders were blanketed by a single second when the checkered flag flew, but it was Harley-Davidson of Wausau/Independence Harley-Davidson's Willie McCoy who bested Chris Carr and a tightly packed field of hard-charging riders to claim an emotion career-first Grand National victory. 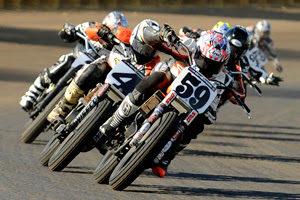 
The heart-stopping action of the twenty-five-lap main was red-flagged on Lap 21 due to two unrelated crashes on opposite ends of the track, Bryan Smith going down in Turn 3, Rob Pearson hitting the ground in Turn 1. Though neither rider was seriously injured, the chance of a win was finished for both. The ten-rider freight train tore through the remaining laps, McCoy crossing the line just .012 of a second ahead of American Motorcyclist Association/Classic Harley-Davidson's Carr. Defending AMA Pro Grand National Champion Jake Johnson (Zanotti Racing/Schaeffer's Harley-Davidson) filled out the podium in third.
"I'm really happy for Willie," said Carr. "No one has worked longer or harder. I rode the best race I could and came home second. I can't ask more than that." 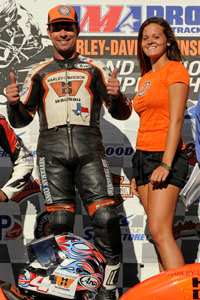 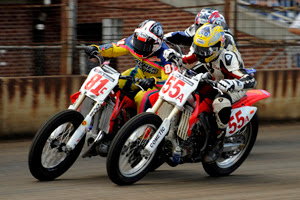 
Palmer (Western Hills Honda), Bauman (Rod Lake Racing/Brown's Cycles), Shayna Texter (RLT Racing/Lancaster Harley-Davidson) and Jake Cunningham (Arai Helmets/Certainteed Products filled out the top five positions.
The Motorcycle-Superstore.com Pro Singles points leaders suffered through a rough day, with points leader Mikey Martin (Weirbach Racing) coming home seventh while his main rivals, Gerit Callies and Mikey Avila, were both on the ground before the day was over. Callies had his Honda fail on the front straight, resulting in a crash that collected Chaz Springsteen (neither Callies nor Springsteen were able to make the 32-rider field out of qualifying). Avila fared a little better until the last lap of the main, when he was collected in a three-rider crash that left him credited with seventeenth. Martin's lead has grown to 17 over Callies, with Avila another five points back.

And here is the link to the complete event results at Springfield from yesterday (PDF versions):

A big thanks to my tour guide and traveling companion for the Labor Day Weekend doubleheader at Springfield, Larry Lawrence, for his story from Cycle News.com on yesterday's Springfield Mile II: