MILLVILLE, NJ (September 4, 2011) - In one of the most incredible AMA Pro National Guard SuperBike battles on record, the 2011 championship came down to an epic 23-lap contest that saw the crown change hands nearly a dozen times -- twice on the final lap alone -- before again being bestowed upon Monster Energy Graves Yamaha's defending champion, Josh Hayes. Far from a one-on-one contest, Hayes and Rockstar Makita Suzuki challenger Blake Young faced off not only against each other but against a handful of other riders fast enough to change the fortunes of all.
With an eleven-point lead over Young heading into the final race of the season, Hayes was well aware that math, as well as motorcycles, would play a big part in today's contest. Should Young win the race and collect a point for most laps led, Hayes needed to cross the line third or better to defend his title. 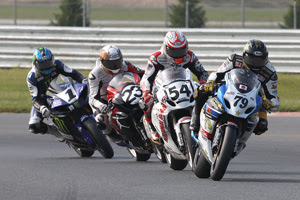 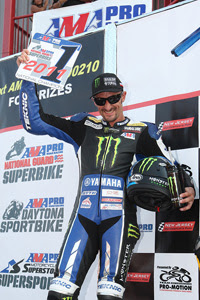 "I got myself into second and got set for a run up to flag," said Hayes, "and it was a heck of a run, but I didn't have enough to get by him. Man, what an exhale [I let out] once we crossed the line and it was over and done with -- Blake made me race my tail off for that last one, and it was great. He rode like a champ this year; he's won seven races and I've only won three, but my bad days weren't as bad as his. He's still learning and he's young, and I'm sure next year's going to be the same thing all over again. He rode a fantastic year, and what a final day. He really pulled it together, and man, rode like a SuperBike racer."

MILLVILLE, NJ (September 3, 2011) - Twenty-three intense laps around New Jersey Motorsports Park's Thunderbolt Raceway didn't decide the hotly contested 2011 AMA Pro National Guard SuperBike Championship, but they did hand points-leader and reigning champ Josh Hayes (Monster Energy Graves Yamaha) a distinct advantage heading into tomorrow's contest. Though hounded by Jordan Suzuki's Ben Bostrom throughout the race, the so-called "Mississippi Madman" put together a highly methodical string of laps that delivered him to a comfortable victory and an eleven-point overall lead.
"I've been a little inconsistent on starts this year," said Hayes, who entered the round with a five-point deficit, "and today was definitely one of my better ones. I had a pretty good feel for how to approach Turn 1, so it worked out good for me. The whole time, I didn't know if it was just Ben behind me or Ben and five more guys, so I wasn't going to lose any time to anyone. I just tried to keep my nerve and ride smooth."
Bostrom kept the pressure on Hayes so consistent that Hayes admitted to temporarily losing focus and beginning to make mistakes halfway through the contest. "It wasn't so much of a fight," said Bostrom, who got the holeshot off the line. "Josh made a great pass on first lap and set an incredible pace, and he was fighting for points, so there was no need to fight with him. "
--------------------------------------------------------------------------------------------------------------------------- 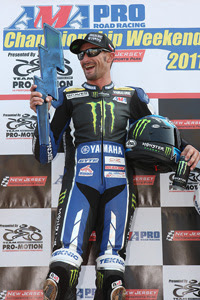 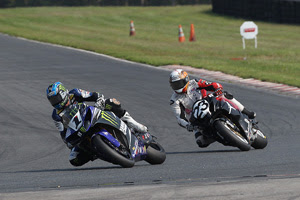 "I felt like I had a pretty good jump [off the start]," said Hayden, "but these other two got an even better jump, so from there it was kind of a long race. By the time I got to third they already had about five seconds on me. Maybe I had the speed to run with 'em, but I for sure didn't have the pace to track them down from there. [Roger and Blake] kept me honest the whole way ... besides that, the race went fairly smooth. Hopefully tomorrow we'll get a better start and put up a better fight."