DAYTONA BEACH, FL (September 13, 2011) - Two very deserving motorcycle racers have taken Sunoco's "Go the Distance" Award, each receiving a $5,000 check for being the AMA Pro National Guard SuperBike and AMA Pro Daytona SportBike riders who covered the most distance in race sessions in their respective classes during the 2011 AMA Pro Road Racing season.

Sunoco Race Fuels have long been known as one of the most active supporters of motor racing across a broad spectrum of disciplines and that support includes AMA Pro Road Racing. As the official fuel supplier of AMA Pro Road Racing, Sunoco 260 GTX fueled every single race winner in every class in 2011. 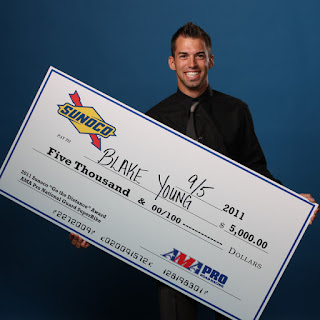 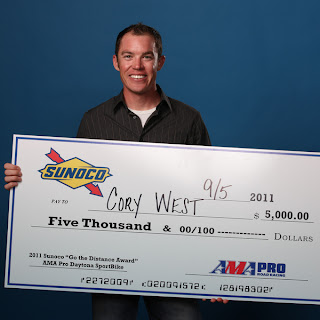 
Sunoco, a world leader in the refining of premium racing gasoline, is the Official Fuel of AMA Pro Road Racing. Sunoco, Inc., headquartered in Philadelphia, PA, is leading manufacturer and marketer of petroleum and petrochemical products, and provides AMA Pro Road Racing with Sunoco 260 GTX, a premium unleaded racing fuel designed to meet the racing needs of AMA Pro Road Racing as well as many other high performance racing applications. Sunoco 260 GTX is formulated for off-road use as a racing gasoline and is available from Sunoco Race Fuels distributors. For more information on this fuel or any other of Sunoco Race Fuels' premium products, please call 1-800-RACE GAS (1-800-722-3427). To locate a distributor near you, please log onto www.racegas.com.