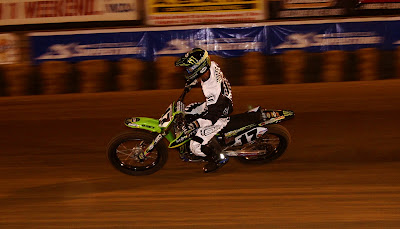 Henry Wiles had to work for it (several times throughout the evening due to red flag delays), but at the end of the evening, the #17 Monster Energy/Jones Bros./Don's Kawasaki/Shift Racing-backed and KX450F-mounted rider had taken victory for the 5th straight time at the running of the Springfield Short Track.  Round 15 of the 2011 AMA Pro Flat Track Harley-Davidson Insurance Grand National Championship Series saw Hammerin' Hank lead defending AMA Grand National Champion Jake Johnson home by 1.850 seconds after 25 hard-fought laps. 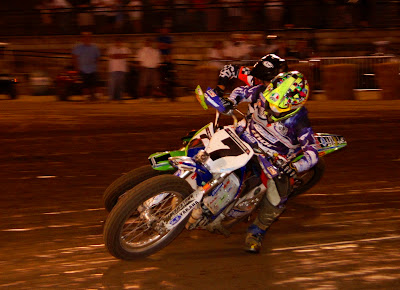 SPRINGFIELD, IL (September 4, 2011) - Round 15 of the AMA Pro Harley-Davidson Insurance Flat Track Championship began with near-record temperatures and a few Illinois thunderstorms, but ended with an altogether different kind of bang as Monster Energy Kawasaki's Henry Wiles claimed the top of the Springfield Short Track box for the fifth time in a row. "It just means so much to me to win this tonight," said Wiles after the race. "I got to take my grandma along with the checkered flag -- she's done so much for my career over the years, it was just so special." 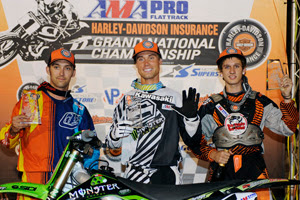 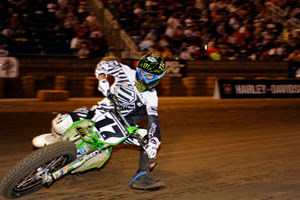 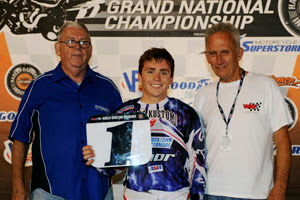 
Halbert's lead in the overall combined championship increased to eight over Jared Mees (Lucas Oil/National Cycle/Rogers Lake Racing), who finished tenth on a rare off night. Johnson, just two points behind Mees, sits third.
The Motorcycle-Superstore.com Pro Singles class, meanwhile, clearly has a new rising star in 16-year-old Briar Bauman, who pushed his Rod Lake Racing/Brown's Cycles-backed Honda into first position on Lap 5 of the 16-lap main. Bauman, who took victory by a margin of nearly two seconds, said, "I really wanted to win this for my dad. We've had a couple of rough weeks after our problem in Peoria, but people make mistakes and you just have to overcome them."


Early leader Will Cato (Shoe Racing) held on for second, while Gerit Callies (Twenty Six Suspension/G2 Ergonomics) filled out the podium in third. Weirbach Racing's Mikey Martin turned in a sixth-place finish good enough to hold on to the points lead, but with Callies just four points behind and Mikey Avila (SDI Insulation/M.E.H. Corp) seven down from Callies, Martin is far from safe.
To learn more and to be a part of the AMA Pro Harley-Davidson Insurance Flat Track Championship, visit www.amaproracing.com and join us on facebook.com/AMAProFlatTrackSeries and twitter.com/AMAProFlatTrack.