In action from the Springfield Mile II round of the 2011 AMA Pro Flat Track Harley-Davidson Insurance Grand National Championship Series, Chris Carr#4 leads the pack early in the main event at the Illinois State Fairgrounds mile oval.  Following are Kenny Coolbeth, Jr. #2, Jake Johnson #1, Jared  Mees #9, Sammy Halbert #7 and Bryan Smith #42.  Carr would fair the best of this pack in finishing second to eventual winner Willie McCoy, with Johnson 3rd, Coolbeth 4th, Mees 5th, Halbert 7th and Smith failing to finish after crashing on lap 21 with a dislocated pinky finger, and was credited with 17th.


With the three-man championship battle taking to the half-mile clay oval in Knoxville, IA. last weekend, Jared Mees on his #9 Rogers Lake Racing/Blue Springs H-D/Screamin' Eagle/Lucas Oil-sponsored XR750 took the win and spoiled the party over Jake Johnson in what was a photo finish.  Mees earlier in the evening had won the Dash for Cash event, and left Knoxville with the overall championship points lead for the first time this year.  After leading the series' standings since the opening rounds at Daytona in March, Sammy Halbert dropped into the second spot of the leaderboard, with Mees four points out-front (321-317.)

Johnson, who rode like the defending champion he is, came up just .004 seconds short on his #1 Zanotti Racing/Schaeffer's H-D/Boughner Racing/Arai-sponsored XR, to take 2nd in the main at Knoxville.  Johnson won his heat #1 to put himself firmly in the main and on the pole with fast time, but finished 2nd to Mees in the Dash as well.  He still has himself positioned in the 3rd spot in the overall standings, just 9 points behind Mees and 5 points behind Halbert.

Sammy Halbert took his #7 Kings Kustoms/White's H-D/LZ Racing/KK Supply-backed XR to 2nd in his heat behind Johnson, and then also a fine 3rd place in the Dash.  However, his 3rd in the main, just 1.041 seconds behind Mees, wasn't enough to retain the series point lead after having held it for the previous 16 rounds of the series.

Bryan Smith and his #42 Moroney's Fasthog.com/American H-D/Rockyonline.com/Boughner Racing-sponsored XR recovered from his Springfield spill to finish 4th at Knoxville, and is now in the 9th spot in the championship standings with 152 points.  He sits within 3 points of Matt Weidman who is currently 8th in the standings.

Chris Carr on the #4 American Motorcyclist Assoc/Classic H-D/DFW Honda/Arai-sponsored XR750 was forced to come out of his semi race at Knoxville in order to qualify for the main.  He did a super job of fighting his way into the 8th finishing position, and now sits in the 5th spot of the overall standings with 208 points.  Brad Baker on the #12 Lloyd Brothers Motorsports Ducati dropped to 6th in the standings (198 points) after failing to make the show at Knoxville, only his second DNS in the Twins Series this season.

Coolbeth took his #2 Harley-Davidson Motor Co/Screamin' Eagle/Spectro Oils/Fox-sponsored factory XR750 home in the 9th spot at Knoxville to keep a firm hold on his 4th spot in the standings with 256 points. 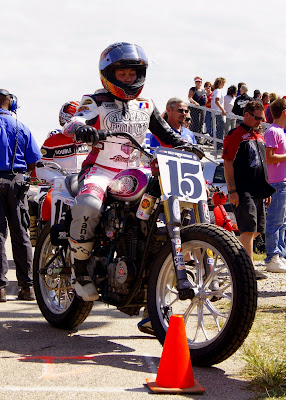 Nichole Cheza rolls her #15 Global Products/Harley-Davidson/D&D Pipes/KK Motorcycle Supply-backed XR up to the waiting line before heat race #1 at round 16 of the 2011 AMA Pro Flat Track Harley-Davidson Insurance Grand National Championship Series at the Springfield Mile II on Sunday, September 4.  Nichole came home 3rd in her heat to qualify directly for the main, where she brought it home in the 10th spot, just .979 seconds behind winner Willie McCoy.


KNOXVILLE, IA (September 11, 2011) - The much-anticipated return to Iowa's Knoxville Raceway was entirely worth the wait, resulting in an AMA Pro Racing Harley-Davidson Insurance Flat Track Championship main event that was decided by a stunning, virtually unheard-of win margin of .0004 of a second. Following a finish so close that transponders originally displayed a .000 dead heat, official timing software was required to bring up an additional decimal point. In the end, just four ten-thousandths of a second separated winner Jared Mees (Rogers Lake Racing/Blue Springs Harley-Davidson) from Zanotti Racing's Jake Johnson. 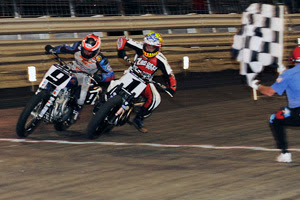 
Johnson and Mees were waging a private battle for the win in the race's closing laps, with Sammy Halbert (Kings Kustoms/White's Harley-Davidson) holding third. Far from in the clear, however, Halbert was being hunted by a fast-closing Luke Gough (Digger 57/Dick Ford/KK Motorcycle Supply) when Eddie Adkins Racing's Jeff Carver hit the ground in Turn 2, bringing out the red flag. While Mees and Johnson picked up where they left off for the remaining eight-lap sprint to the finish, a mechanical problem ended the young Australian Gough's dream night. Halbert was left to cruise safely home in third.
The closest finish of the year has tightened the points race yet further and resulted in a significant shift in dynamics: For the first time in 2011, Halbert -- who clinched the 2011 Expert Singles Championship at Round 15 -- has been forced to surrender his lead in the combined Harley-Davidson Insurance Grand National Championship. Mees has taken control with a four-point advantage over Halbert, while Johnson lurks just five points behind Halbert in third. In a nod to the skills of the championship's top three, the lead trio commanded not only the main-event podium, but the earlier Dash for Cash top tiers as well.
Fasthog.com's Bryan Smith rebounded from a disappointing Labor Day weekend with a solid fourth-place finish. Universal City Kawasaki Motorsport's JD Beach returned from his road race adventures to earn fifth at Knoxville, his best outing yet on the potent Kawasaki.
--------------------------------------------------------------------------------------------------------------------------- 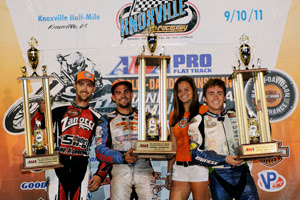 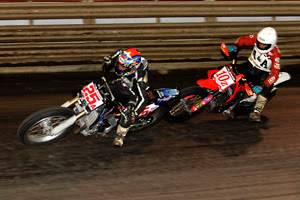 Texter and Bauman exchanged the lead several times as they raced off to a small advantage, but in the end it was Texter who would not be denied, taking victory by .357 of a second. Rispoli dropped from third to sixth on the last lap, handing the final podium spot to Woody Kyle Racing's Michael Toon. Series points-leader Mikey Martin (Weirbach Racing) earned fourth, followed across the line by Foard Racing's Jason Isennock.

And Dave Hoenig also posts his results and full catalog of shots from the Knoxville Raceway Half-Mile (which are generally available 3-5 days after each event) at his great site, Flat Trak Fotos.com:

And thanks to Miriam Deitcher for her Flat Track Live @ Facebook for this video of the main event from Knoxville:

Knoxville Tales of the Race

This is the story that Larry Lawrence filed just after the Knoxville event on Saturday, September 10 over at Cycle News.com:

And Motorcycle-USA.com has this report of round 17 of the 2011 AMA Pro Flat Track Harley-Davidson Insurance Grand National Championship Series at Knoxville filed by Bryan Harley:

Here's the link to Larry Lawrence's write up on the happenings at the Knoxville Raceway Half-Mile at Cycle News.com's Digital edition, just out today: