In the course of the last three races in the 2011 AMA Pro Flat Track Harley-Davidson Insurance Grand National Championship Series presented by Motorcycle-Superstore.com, the pendulum has swung dramatically in favor of '09 AMA Grand National Twins Champion Jared Mees on his #9 Rogers Lake/Blue Springs Screamin' Eagle/Lucas Oil/National Cycle-sponsored XR750.  Winning his 5th race of the season on Saturday in Paul Bunyan Land, Jammin' Jared grabbed a firm hold on the overall point standings after having taken the lead two weeks prior in winning the Knoxville round.  With just two rounds remaining in the season, Mees now holds an 18 point lead over new runner-up Jake Johnson (348-330 points.)

Defending AMA Grand National Champion Johnson did all he could do to keep Mees in his sights the last two rounds, finishing runner-up at Knoxville on his #1 Zanotti Racing/Schaeffer's H-D/Boughner Racing/Arai-backed XR and in the 3rd spot Saturday night at Brainerd.  Even though Johnson managed to take over the 2nd spot in the standings from last week's new runner-up, Sammy Halbert, it was not enough to keep the title from slipping further from his grasp with the two west coast rounds left in the season.  Johnson also finished 4th in the Dash, but Mees gained another point on The Champ by finishing 3rd.

Slammin' Sammy came back from his heat race crash at Brainerd on Saturday night to win his semi on his #7 Kings Kustoms/White's H-D/LZ Racing/KK Supply-sponsored XR, but was only able to work his way up to 8th on the night on the tight circuit at the North Central Speedway, and fell to 3rd in the overall standings with 328 points.  The five point lead he had held going into Knoxville has now turned into a 20 point deficit in the course of two rounds after having led the series standings since the opening doubleheader rounds at Daytona back in March.  There is still time for the tough Washington State rider, but it's running out quickly.

Bryan Smith won the fastest heat race on the night at Brainerd to nab the pole for the National main on his #42 Moroney's Fasthog.com/American H-D/Rockyonline.com/Boughner Racing-sponsored XR, and eventually came home 5th after having finished 6th in the Dash event.  Coupled with Matt Weidman #20's great run into 6th in the final, Smith now sits 9th in the overall hunt (166 points) behind Weidman in 8th (172 points.)  This should be a great battle to the finish between Michigan resident Flyin' Bryan and New York State homeboy Mad Matt.  Both are well-experienced on half-miles and with both remaining races on half-mile tracks, we should see some great action out of these two to finish out the season on a strong note.

Brad Baker took his #12 Lloyd Brothers Motorsports/TeamHurtbyAccident.com/Nicky Hayden/Foremost Insurance-sponsored Ducati 1098 to the 2nd spot in the semi behind winner Jeffrey Carver, Jr. to earn his spot in the main at Brainerd, but only finished 16th, 11.979 seconds behind winner Mees.  Baker sits a solid 6th in the overall standings with 201 points, and is still a lock for the 2011 Saddlemen Rookie of the Year Award.  And you can't fault The Bullet OR the team in their great first year together, and should add a lot of promise going forward for their 2012 plans.

Carver made the main at Brainerd on his #23 Eddie Adkins Racing/Van's Yamaha/Stevens Racing/Leo Welch-backed XR750, and finished just behind Baker in the 17th spot.  Carver left Brainerd in a tie for the 11th spot in the championship standings (108 points) with Illinois resident Rob Pearson, but holds the tie-breaker on the season.  Carver has had a great rookie season on the big Twins Series bikes after winning the 2010 AMA Pro Flat Track Motorcycle-Superstore.com Pro Singles Championship, and he surely going to keep getting even better.

The shot used for this week's wrap-up for round 18 was taken at Lake Odessa in July 2011 during the Dash for Cash event.

With the series making it's last stop in the Midwest, rounds 19 and 20 now head to the West Coast with this coming Saturday's event at the Calistoga Half-Mile and the season finale at the Pomona Half-Mile on October 15.  At this point, the big question on everyone's mind has to be can anyone derail the train that is Jammin' Jared Mees and his Brent Armbruster-tuned stable of H-D XR750s?  And I would have to say that his prowess on the half-miles all season at this point makes a great case for 'no.'  As we all know, anything can happen in racing, but at this point, the wheels look to be pretty well greased on the Rogers Lake team and rider! 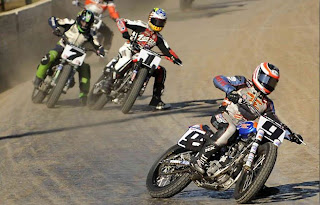 
After battling with Johnson for a few laps, Coolbeth closed the gap on Mees to about half a second, but stalled out there.
"I think I was faster than Jared," Coolbeth said. "I moved up from a bad start and was making passes pretty easy, but it took me too long to get by Jake, then I just seemed to lose my drive and couldn't catch Jared."
Johnson lost contact with the two leaders and settled into a solid third. American Motorcyclist Association / Classic Harley-Davidson's Chris Carr moved from seventh to fourth as he worked his way through traffic.
Mees got the hole shot in the National, with Johnson, White's Harley-Davidson / SNIP's Matt Weidman and Fasthog.com / American Harley-Davidson's Bryan Smith in tow.
Coolbeth and Carr got by Smith on lap four, with Coolbeth getting by Weidman three laps later. It took Carr until just passed the half way mark to get into fourth and let Smith and Weidman battle over fifth. Smith would come out on top there.
Making his first National appearance since breaking his hand at Peoria, A&J Racing / Southland Racing's Jimmy Wood was an impressive seventh.
"After Peoria, they put 27 screws and two plates in my hand," Wood sad. "I'm just lucky to be back, but I think this was my kind of track, had I been healthy. My bike was really working."
Finishing a disappointing eighth was Kings Kustoms / White's Harley-Davidson's Sammy Halbert. A heat race crash had forced the former points leader to his back-up bike. After finishing his heat out of the transfer spots, he won the fastest semi of the night, but had to start on the third row in the main and eighth was as far as he could move up.
Kenny Coolbeth and Matt Weidman led Mees home in the Dash and that was a temporary help to Halbert, but with Mees and Johnson first and third in the National, Halbert has now slipped to third in the standings, 20 points down on Mees. Defending Grand National Champion Johnson moved into second, 18 points behind Mees with two races remaining on the schedule.
The Motorcycle-Superstore.com Pro Singles class belonged to Mikey Avila as he dominated on his Joe Bisha tuned SDI Insulation / MEH Corp backed Honda. Series Points leader Weirbach Racing's Mikey Martin held second early, but ANT Racing / Star School's James Rispoli was giving Martin fits as Avila pulled away.
Rispoli, the 2011 AMA Pro Motorcycle-Superstore.com SuperSport road racing National Champion, finally locked the second position down on lap six, but Avila proved to be uncatchable. Twenty Six Suspension's Gerit Callies was able to grab the last podium spot from Martin on lap 14 of the 16 lap race.
With just two races remaining in the Motorcycle-Superstore.com Pro Singles Series Martin holds a 16 point advantage on Avila with Callies another four back in third. They are the only riders with a shot at the Pro Singles title.
Next up for the AMA Pro Flat Track Grand National Championship will be the high-speed half-mile of Calistoga Speedway in Calistoga, Calif. on October 1.

And a big thanks again goes out to Miriam Deitcher, for her Flat Track Live @ Facebook for this video of the National main event at the North Central Speedway:

And here is Cycle News.com's brief story of the race at round 18 of the 2011 AMA Pro Flat Track Harley-Davidson Insurance Grand National Championship Series presented by Motorcycle-Superstore.com event at the Brainerd Half-Mile: