AMA Flat Track: Jared Mees Reports on Winning His 5th Event of the Season at the Brainerd Half-Mile 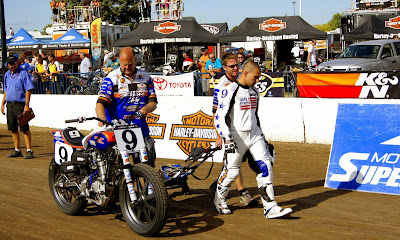 Jared Mees and the #9 Rogers Lake Racing/Blue Springs H-D/Screamin' Eagle/Lucas Oil-sponsored team roll out one of the team's XR750s in preparation for round 16 of the 2011 AMA Pro Flat Track Harley-Davidson Insurance Grand National Championship Series at the Springfield Mile II on Sunday, September 3.  Mees took 5th in the main, after earlier in the day winning the Dash for Cash event, to go along with the major-cool Nicky Hayden Tissot Watch that went to the victor of the Labor Day Weekend event.

Mees debuted his set of retro Gary Nixon riding gear at the Illinois State Fairgrounds mile oval, to honor the loss of one of the sport's icons, who had passed away in early August.  From his helmet down to his riding boots, The Jammer had it going on and was big-time styling in the looks department, and along with the re-worked #9 number plate, looked every bit the part as the late 2-Time AMA Grand National Champion did back in the late '60s and early '70s when he was still active on the American flat track scene.  Mees' tuner, Brent Armbruster, rolls the machine out while Jammin' Jared walks along with another of his crewmen.

After taking his 5th win of the season at the North Central Speedway 'half-mile' last Saturday, Mees and company took a commanding lead in the overall championship series with an 18 point edge on defending AMA Grand National Champion Jake Johnson (348-330), and a 20 point lead over former series point leader, and now 3rd in the standings, Sammy Halbert (328 points.)  With the run in the Twins Series events that Mees has established for himself and the Rogers Lake Racing team, the championship is arguably his to lose with the final two west coast events to run this season.  Johnson and Halbert are the only riders left at this point in the championship hunt with a matematical chance of taking the title away in the final stretch.

Although the Brainerd track was reported to be closer to '3/8ths' of a mile as opposed to the half-mile it was advertised at, Mees' win in Minnesota made his tally for the season 4 half-mile wins and 1 mile win, all since late May at the Springfield Mile I (Hartford, Lake Odessa and Knoxville are the other rounds The Jammer has bagged in the last four months of racing.)

Obviously the big question and/or thought on everyone's mind going into round 19 this Saturday at Calistoga, CA. and the season finale in Pomona, CA. on October 15, is can Jared and The Rogers Lake Racing team be stopped?  With both of those remaining events on half-mile tracks, going in you have to give the overall on-track advantage to Mees and Company.  At this point, if you don't, you could be the big loser when Jared and the team hoist that #1 plate over their heads in just over two weeks time.  Mees also won the 2009 AMA Pro Flat Track Grand National Twins Series Championship, but should he accomplish this great feat after the Pomona checkers have flown, it will be his (and tuner Armbruster's) first AMA Grand National Championship, a very worthy feat by anyone's standards.

Jared Mees checks in after winning round 18 of the 2011 AMA Pro Flat Track Harley-Davidson Insurance Grand National Championship Series at the North Central Speedway in Brainerd, MN., for his series-leading 5th win of the season.

I was told this track was small. I didn’t know quite what to expect, but when we got there it was small ! When we finally got on the track it seemed even smaller yet. I have never run on a track this small before racing a Harley-Davidson XR750. Well I thought, hope for the best.

Qualifying went well… it was my first time this year as Fast Qualifier. This put me in the 1st Heat Race with Kenny Coolbeth among others. I got a lousy start behind Mick Kirkness but made my way up to the front after getting past Jake Mataya. From then on I was able to run my own race but felt someone on my heels the rest of the way. Coolbeth was right on me as I looked back after crossing the line to win the First Heat. I needed just a little more from somewhere.

For the Dash for Cash we tried a couple of different things. I got off the line well but halfway thru Bryan Smith went down, bringing out the red flag. On the re-start I got another decent jump, but Coolbeth and Matt Weidman were getting it done. I finished 3rd. I needed a little bit more speed in turns 3 and 4, so we changed a few minor things and My mechanic, Brent Armbruster, pounded in my head a few small things to pick up, and it worked.

In the Main Event I nailed the holeshot and was in the lead. Those “few small things” I had picked up from Brent made the difference. Halfway flags and I was still in the lead. Five to go and I was still in the lead. I didn’t look back a single time but heard people behind me. I was able to hold them off and win my 5th race of the season, extending my points lead to 18 ahead of second place Jake Johnson. It felt great to make it happen. After my Heat and the Dash I had thought that Kenny Coolbeth was the guy to beat and maybe, had he gotten the holeshot in the Main, he may have been the race winner, but we got it done on this night.


We are now on our way out West, with Calistoga CA this weekend. I really like the track a lot, so I’m looking to have some fun and get another good finish, and gain even more points on the Championship run.

Thanks to all my supporters and fans. Until next Saturday, Jammin’ Jared Mees # 9