AMA Flat Track: You Still Have 16 Days to Get In On The Lloyd Brothers Motorsports Buell Air Fence Fund Raiser Raffle 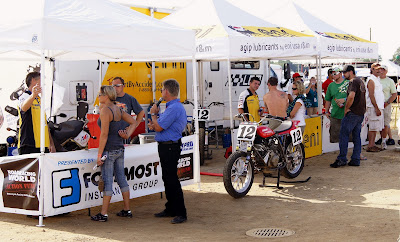 Early in the 2011 AMA Pro Flat Track Harley-Davidson Insurance Grand National Championship Series season, AMA Pro Racing and the Lloyd Brothers Motorsports team banded together to work towards a very worthy cause.  That cause was the raffling off of a bike that would see the funds raised from that raffle used to put into the Air Fence Fund for AMA Pro Flat Track.

Since the inception of air fence usage in AMA Pro Flat Track (and many other premier racing series in the world, as well) many lives have been spared due to the use of these protective 'air bag' barriers that now line the tracks all over the world.  Used as a great tool to not only protect barriers, but also as a 'pillowing cushion' to help 'swallow' a rider up and prevent that rider from coming into contact with a solid/immobile object around the track.

With the pairing up of the LBM team and AMA Pro Racing, LBM took possession of the 2009 AMA Pro Road Racing Pace Motorcycle, a 2009 Buell XB12XP.  Their job:  to transport the grand prize in the raffle to all of the AMA Pro Flat Track Twins Series events, set it up on display, and sell the fans on purchasing a chance on winning the machine that paced all of the AMA Pro Road Racing events during the '09 season, and most importantly, putting the money earned towards the AMA Pro Flat Track Air Fence Fund.

With the approach the Lloyd Brothers team has shown in their professional and always-sano look on and off the track, co-owners Dave & Mike Lloyd would dutifully unload the Buell at each event, set up a seperate 'pop-up' awning in their pit area, and hawk the ticket purchase and fund raiser's value to the fans during the fan walk at each AMA Pro Flat Track Twins Series event.  And at the the three Twins Series events that I hit up this year, they did a wonderful job of 'selling the goods' to the fans and anyone who wandered by to take a look-see.

Round 11 of the 2011 AMA Pro Flat Track Harley-Davidson Insurance Grand National Championship Series stop at the I-96 Speedway in Lake Odessa, MI. was no exception, as can be seen in the shot above taken at the half-mile event's on-track break during the fan walk around.  As AMA Pro Flat Track announcer Barry Boone talks to the crowd about the team's efforts in displaying the Buell and selling the raffle tickets, team co-owner Mike Lloyd can be seen on the left side of the shot (partially obscured) talking with fans and sponsors.  The team's frame fabricator, Lyle Pizzino (of VMC Racing Frames/Pizzino Fabrication) is just to Mike's left in the sunglasses, flanking the end of the Buell XB.  Brother Dave is just out of sight talking with one of the team's sponsor-reps from Foremost Insurance.

Former National #23 and Michigan Mafia member Kevin Atherton, who also acts as a rider/coach/tech for the team and rider Brad Baker, can be seen talking with some of the other fans in the LBM pit area in between the team's two #12 Lloyd Brothers Motorsports/TeamHurtbyAccident.com/Foremost Insurance/Nicky Hayden-sponsored Ducati 1098s.  Rider Brad Baker, the '09 AMA Pro Flat Track Pro Singles Champion (and most assuredly the 2011 AMA Pro Flat Track Saddlemen Rookie of the Year) is in the far right rear of the team's area, and can be partially seen in the red shirt talking with another group of LBM/Ducati/Brad 'The Bullet' Baker fans.  Needless to say, these guys stay busy at the track no matter what they are doing, and look great doing it too!


Tickets are still available to raise money for the air fence. You can use PayPal or Credit Card if you can't make it to one of the final two nationals.

Just over 2 weeks are left to purchase a chance to win an AMA Pro Racing Pace Buell Ulysses XB12XP or an Arai Helmet and at the same time help support the flat track portion of the Roadracing World Action Fund.

Lloyd Brothers Motorsports, Inc. with support from Foremost Insurance Company, Arai Helmets, and AMA Pro Racing is running a very exciting fundraiser for the flat track portion of the Roadracing World Action Fund, a 501 (c) 3 non-profit organization with a mission of reducing racetrack injuries by advocating and promoting the use of soft barriers, like Air Fence*.

To get a better understanding or what soft barriers do and why they are so important, go to http://www.youtube.com/watch?v=Cd6UMGnIktE .


The grand prize in the raffle is a 2009 Buell Ulysses XB12XP that was used as the official Pace Motorcycle during the 2009 AMA Pro Road Racing season. The Buell, which has less than 210 original miles, was donated by AMA Pro Racing.


Tickets are $20.00 each and can be purchased at the following upcoming AMA Pro Flat Track events:

A website has also been set up (http://www.lloydbrothersmotorsports.net/airfence.htm) where donations can be made via PayPal and credit cards. A donation of $20 will receive a free entry in the raffle.


For more information about any of these events, go to www.amaproracing.com/ft/ .

The winning tickets will be drawn and announced at the season finale October 15 in Pomona, California. Winners do not need to be present to win and will be notified after their ticket is drawn.

To learn more about soft barriers or to donate directly to the Roadracing World Action Fund visit http://actionfund.roadracingworld.com


A complete list of tickets sold and who bought them is at: http://www.lloydbrothersmotorsports.net/tickets.htm